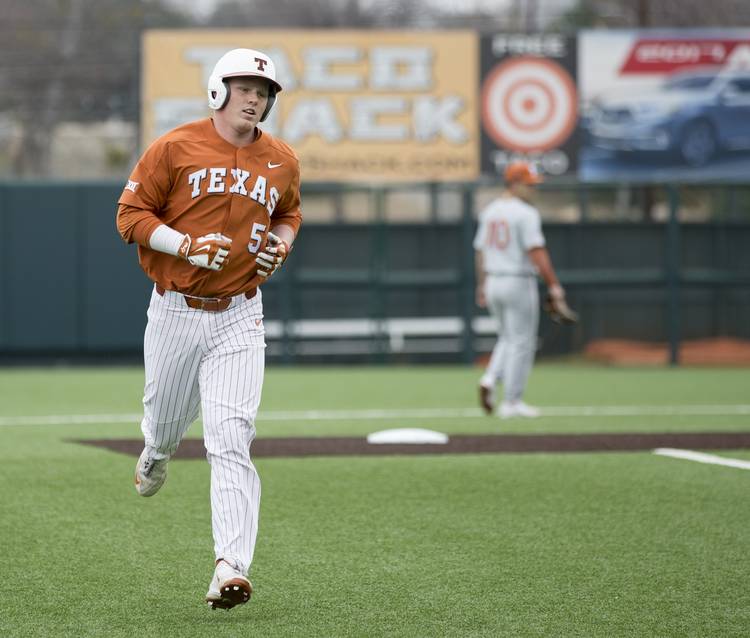 This spring, Ryan Reynolds has been switching things up by not switch-hitting.

Texas’ sophomore infielder is still listed as a switch-hitter on the roster. But Baylor right-hander Hayden Kettler — the Bears’ projected starter Friday night in the two teams’ Big 12 series opener at UFCU Disch-Falk Field — won’t see him swinging from the left side of the plate. Reynolds has abandoned his left-handed swing but remains a presence in UT’s lineup.

“I started switch-hitting my eighth-grade year,” Reynolds said. “It was kind of weird at first, seeing righty on righty. I did it all through the fall, so it’s normal now.”

During the fall, he approached UT coach David Pierce about only batting right-handed. Pierce initially balked at the idea. Reynolds persisted and Pierce relented after conceding that Reynolds would perform better if he was in his comfort zone.

“I didn’t really like it, but it’s a comfort for him right now and so we’re sticking with it,” said Pierce, who joined Reynolds in acknowledging that a return to switch-hitting could still happen. That, however, likely won’t occur this year.

Home run #3 on the year for @r_reynolds5 was an absolute BLAST. #HookEm 🤘 pic.twitter.com/BCQ78ljebA

He’s been Texas’ cleanup hitter in seven straight games. That placement in the lineup has provided protection for Kody Clemens, who hits third and was named a mid-season All-American by two different publications this week.

“Definitely you don’t want to pitch around me because then you’ve got Ryan coming up,” Clemens said. “He’s got a lot of power; he’s a hard out. It’s definitely nice having someone behind you that you know can hit the ball out of the park and do some damage as well.”

Reynolds, the son of former Longhorns and Houston Astros pitcher Shane Reynolds, began this season playing first base for the first time in his career. But he quickly was moved to third base, his primary position last year. He made the season’s biggest defensive play while manning the position in a postseason game against Long Beach State.

Texas has a .978 fielding percentage, which ranks 26th nationally. The Longhorns have committed only two errors in their nine Big 12 games.

“First base isn’t that hard; it’s not much different from third,” Reynolds said. “I feel pretty comfortable at third now.”

Texas improved to 19-12 with this week’s wins over McNeese State and Texas A&M-Corpus Christi. The Longhorns also are 6-3 in conference play. Baylor has lost six of its nine games against Big 12 teams heading into the series.

The three games against the Bears will set UT up for next week’s rivalry road trip. Texas will travel to Texas A&M on Tuesday before spending its weekend at Oklahoma.

“We’ve done OK against really good teams, and Baylor is a very solid team,” Pierce said. “A&M and OU are A&M and OU and they’re both on the road, which is something that we’re trying to also overcome. These next seven games are very critical for how we perform.”