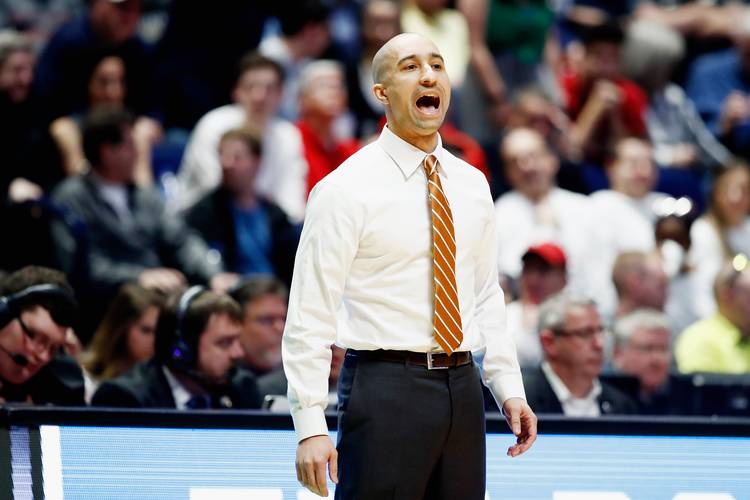 Head coach Shaka Smart of the Texas Longhorns reacts against the Nevada Wolf Pack during the game in the first round of the 2018 NCAA Men's Basketball Tournament at Bridgestone Arena on March 16, 2018 in Nashville, Tennessee. (Photo by Andy Lyons/Getty Images)

Courtney Ramey, one of the few high-profile recruits still available in the Class of 2018, released his “top 10” list on Thursday, less then a week from the start of the spring signing period on April 11.  Texas, where he visited during the 2017-18 season, made the cut.

For months Villanoa has been predicted by the 247 Sports’ Crystal Ball as the team for Ramey, but the defending champion Wildcats has yet to even extend the 6-3, 170 pound guard a scholarship offer, according to the recruiting site. But even after he eliminated Villanova, the site was still predicting, with 48 percent, Villanova is his future team.

If the champs aren’t making a top 10 list in April of his graduating year, Ramey probably isn’t eating cheese steaks next fall in Philly.

Ramey is the No. 9 point guard in the composite rankings and No. 40 overall. He is the highest rated player in the state of Missouri. His home state school could be the favorite now and Louisville could be an interesting choice considering new coach Chris Mack is in place and Ramey may have a decent shot of playing heavy minutes for the Cardinals next season.

As for Texas, a scholarship glut that had developed following the Fall signing period has opened. Mo Bamba is off to the NBA and not returning and Jacob Young and James Banks announced they were transferring last month. That opened a scholarship for the Longhorns, who under Smart the last two off-seasons kept a scholarship open, likely for flexibility purposes– if a player decides to transfer to Texas mid-season or if a recruit reclassifies, there’s a scholarship open.

If junior guard Kerwin Roach, who entered the NBA Draft without an agent last month, remains in the draft, two more scholarship would open.

If Ramey picked Texas, the Longhorns would go from a program that just two years ago had no true point guards to a team with three point guards, two of whom are high-level recruits (Matt Coleman and Ramey) and another an experienced transfer (Elijah Mitrou-Long).

Texas’ name has popped up in several murmurs involving transfers as well:

If Texas actually has any interest in these transfers is another story. A story that recently played out in Norman last week.

Whether Texas fills the final scholarship– or two–or not won’t derail what could be a talented team in 2018-2019.

Coleman, a former top 50 recruit who had a strong freshman season, would pair with fellow sophomore Jericho Sims and senior Dylan Osetkowski to form an experienced core. Add Roach back to the mix, and Texas has its most experienced, and in a way complete, team yet under Smart.

Mitrou-Long,Jase Febres, Royce Hamm are other returning players in the mix.

The question will be Andrew Jones’s status. The would-be junior is fighting leukemia and reportedly making terrific progress. But it’s unclear when he’ll be able to play basketball again. Jones, a former McDonald’s All-American, was off to a tremendous start to his sophomore season before being diagnosed mid-season.

The returning players will team with a top 15 recruiting class in the nation, featuring standout 4-star players Gerald Liddell and Kamaka Hepa along with Jaxson Hayes (who led his team team to an Ohio Division I State Championship last month) and local product Brock Cunningham.

If Ramey joins the Longhorns recruiting class, currently No. 12 by 247 Sports, Texas would jump to No. 6 in the country.

Where the Longhorns rank in Big 12 landscape

Texas landed the No. 1 recruiting class among Big 12 teams the last two cycles. Texas edged out Kansas two years ago after Jarrett Allen committed and last year were the run away top class with Bamba, Sims, Hamm and Febres. Those two classes were boosted by the landing McDonald’s All-American 5-star players late in the spring. This year’s class is powered by depth with three 4-star players and one 3-star recruit.

The class is appears locked into the second best slot in the conference, unless Iowa State, No. 26 nationally, were to unexpectedly add more recruits.

Ramey seems to be the only big recruit Texas is pursuing this spring, but his commitment alone wouldn’t push Texas over Big 12 Champion (x14) Kansas’ class. The Jayhawks are No. 5 with two 5-star players, including the No. 1 player in the state of Texas, Quentin Grimes, and another 4-star player, David McCormick, a McDonald’s All-American.  Kansas is currently one of three schools on 5-star, No.5-rated player in the class Romeo Langford’s list. If Kansas lands the Indiana product, Kansas moves up to No. 2 nationally, behind only Duke, who landed three of the top four players (including the top two) in the class.