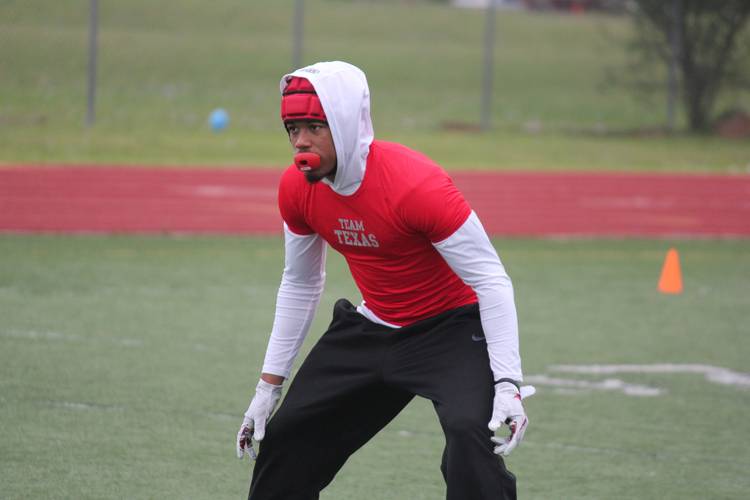 Coppell defensive back Jonathan McGill is a member of the 2019 Fabulous 55. (Mike Craven)

Texas is known to slowly go through the recruiting process and remain in touch with prospects for long periods of time without extending an offer. Coppell defensive back Jonathan McGill is a player the Longhorns are monitoring and could offer this cycle. He’s an undersized playmaker who can impact the game as a safety or in the nickel.

The 3-star prospect and member of the Fabulous 55 plans to take one official visit this spring to an undisclosed school, but he’s not in a rush to fulfill his five-official visit limit before the fall like most of his 2019 peers. One reason is that he’s awaiting offers from schools like Texas, Washington and Arizona State.

“Texas is a school I talk to a lot,” he said at the Pylon 7-on-7 Tournament in Fort Bend on Saturday. “I hope to come out with my top schools in summer and take officials in fall and see what happens. I may take on official in the spring.”

The 5-foot-10, 175-pound prospect holds 17 offers with Stanford considered the favorite. Distance won’t matter for McGill, and he thinks proximity to home is becoming less of a factor for modern-day recruits because of the advancements of national television contracts and the advent of social media and tools like Facetime.

“I want to go and play early in my career. Another is a place with stable coaches and a long-term plan. Also, a place I can see myself thrive,” he said. “Distance isn’t a big part to me because of national tv and social media.”

A lot is made of the importance, or lack of importance, of club 7-on-7 football. McGill sees it as an opportunity to improve as a defensive back and get a chance to build bonds with peers and see parts of the country he wouldn’t normally visit as a high schooler.

“It gives me a chance to go against top receivers from across the country. It makes you better and perfect your craft,” McGill said. “You stay in hotels with guys with offers from the same places and form bonds. It helps you want to go to a school and go be great together. We also try and get the other guys offers who might not have the attention yet.”

The Longhorns are still in the mix for 4-star defensive back Erick Young, albeit a long shot. Texas is recruiting the No. 22-ranked player on the initial 2019 Fabulous 55 as a safety. Young says he prefers to play cornerback, but that he won’t pick a school based on the position he would play.

“That doesn’t matter to me,” Young said. “I’ll pick the school, not the position and play where I best fit that school.”

Texas A&M, Oklahoma and Alabama lead for Young. He plans to make a commitment before his senior season and take all five official visits before deciding. Schools like Texas, Auburn, LSU and Ohio State are vying to earn one of his two other official visits. Young will visit Texas A&M next weekend and says he’ll take officials to Oklahoma and Alabama.

Young returned from a wrist injury and is ready to compete in spring practice at Fort Bend Travis.

“It feels good to compete,” he said after the Pylon 7-on-7 tournament on Saturday in Houston. “I play safety and cornerback, but I think corner is where my most upside is.”

Life can get hectic for elite recruits. The most coveted prospects report receiving upwards of 50 text messages and direct messages a day from coaches and reporters. It’s a draining and overwhelming process for a teenager. That’s why Brian Williams, the No. 4-ranked player on the Fabulous 55, is happy with his firm commitment to Jimbo Fisher and the Aggies.

“I only really entertain conversations with coaching staff at Texas A&M and try to avoid all the other stuff, so it can be chill,” Williams said. “It’s nice having it out of the way and not weighing on me like it does other guys. I’m happy with my decision and I don’t think it will change.”

The emergence of talent at the TAPPS level is undeniable. Six of the top 14 players on the 2019 Fabulous 55 play at private schools. Williams is one of two Bishop Dunne products on the list, joining Illinois commit Marquez Beason. Only two players in the entire top 40 of the 2018 Fabulous 55 played at a private school.

“I’m not exactly sure why the talent at the private school level is growing. I do know it has been a great experience for me and it has prepared me for college because of the workload,” Williams said. “It isn’t always easy, but it will pay off once I’m in a college setting. I feel prepared for the next chapter of my life.”