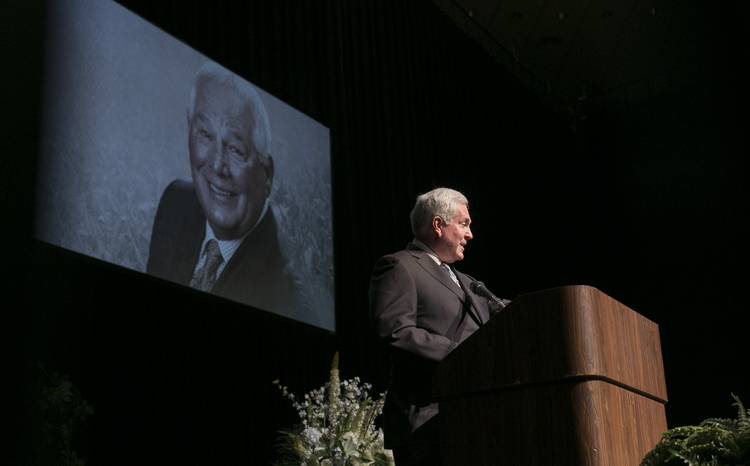 Grass recalled an early chapter in “Life is Yours to Win” in which Garrido figured he’d be buried in his baseball uniform. His obituary, Garrido guessed, would read like a box score. Grass hoped aloud on Monday that those words weren’t actually a set of instructions because “if it was, we did it wrong.”

Grass was among those who did things right at the Erwin Center on Monday at a celebration of life service for Garrido, who passed away at age 79 on March 15 after suffering a stroke in California.

“I think those of us that really know him can agree, the uniform never defined him,” Grass said. “As impressive as his career statistics are, his real accomplishments are far too great and meaningful to fit neatly within a box score. Augie positively impacted and influenced thousands of people throughout his life, and that is his true success story and his true legacy.”

During the two-hour service, songs were sung by the Longhorn Singers and local artist Roderick Sanford. “The Eyes of Texas” was performed by the Longhorn band. Two videos were played, one of which was narrated by Kevin Costner, a friend of Garrido’s. A letter of condolence from former President George W. Bush was read. Tears were shed by Brown and fellow speakers Huston Street and Joe Martelli.

Plenty of stories also were told.

Street, a 13-year MLB veteran, spoke of Garrido’s dismissal of the concept of pressure. Former UT athletic director DeLoss Dodds drew a laugh when he claimed Garrido’s cooking show was the only coaching show he’d watch on Longhorn Network. Martelli, who played and coached at Cal State Fullerton, said Garrido refused to use sub-par facilities as an excuse as he was building the Titans into a national power.

Former Texas bullpen catcher James Barton regaled about Garrido motivating the Longhorns by locking them out of their locker room ahead of a run to the 2014 College World Series. Along with Texas basketball coach Shaka Smart, Barton also shared the last text message he received from Garrido.

“I got to spend hundreds of hours with Augie,” Barton said. “I had to soak it in that I got to play for a legend, that’s pretty cool.”

Mark Kotsay, who won an NCAA title with Garrido at Cal State Fullerton before embarking on a 17-year MLB career, issued a reminder that Garrido was the last person to take credit for his team’s successes. Kotsay discussed the meaningfulness behind Garrido’s fabled rants and life lessons. He asked the attendees to put their horns up to honor Garrido.

Kotsay also used the analogy of a home run — somewhat ironic, considering Garrido’s penchant for small-ball baseball — to describe the legacy left behind by his coach.

“When you see a home run ball disappear over the fence, you know it doesn’t cease to exist. It’s just out of your view,” Kotsay said. “Even though he might just be out of our view, I believe that Augie will always be with us. All of us can honor his legacy as we teach what he taught us — humility, effort and trust.”

With a career record of 1,975-951-9, Garrido is the all-time winningest coach in college baseball’s history. He won three national championships at Cal State Fullerton before guiding the Longhorns to NCAA crowns in 2002 and 2005.

Dodds recalled on Monday wanting to hire Garrido after he was impressed by a post-game interview given by the coach when he was still at Fullerton. Garrido was eventually tabbed to replace Cliff Gustafson, and he won 824 games with the Longhorns from 1997-2016. Garrido recently served as a special assistant to the athletic director at Texas.

Garrido is survived by his wife, Jeannie, and daughter, Lisa. Garrido was buried at the Texas State Cemetery on Sunday, next to former UT football coach Darrell K Royal.