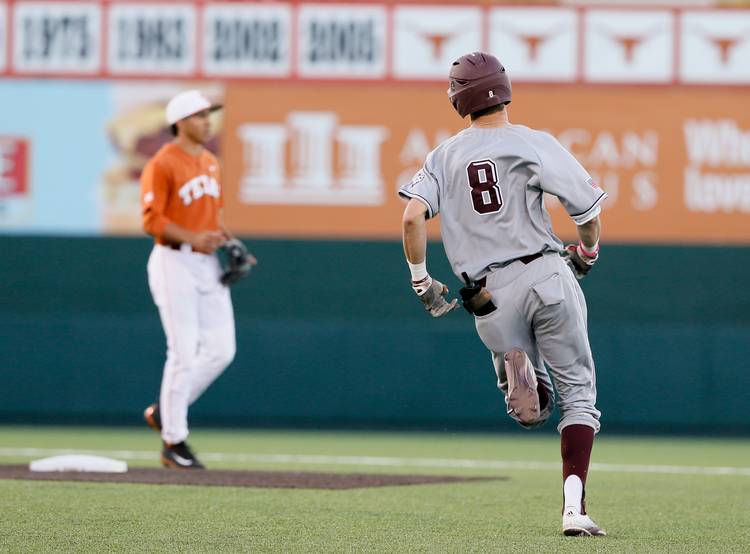 Texas A&M's Braden Shewmaker (#8) runs to second base in a game against Texas at UFCU Disch-Falk Field in Austin on March 14, 2017 (Andy Nietupski for AMERICAN STATESMAN)

COLLEGE STATION — Repeatedly on Tuesday night, Texas had Texas A&M in its crosshairs.

The Longhorns, however, could not get off a clean shot.

“We definitely fought,” said Kody Clemens, whose team will travel to No. 16 Oklahoma this weekend. “I just think that we had plenty of opportunities to score runs and we didn’t.”

Texas A&M (24-9) scored four times in the first inning on Tuesday, but UT (22-13) twice pulled within a run during a game that lasted nearly four hours. The Longhorns, though, could not pull even with the Aggies. Four times in the final five innings, Texas left a runner in scoring position:

Texas outhit Texas A&M 12-9. UT left 13 runners on-base and was held hitless in its three at-bats with the bases loaded.

“I just feel like we gave them everything and when we had opportunities, we didn’t take advantage,” Texas coach David Pierce said. Pierce added his team also missed out on chances to score early in the game.

When they weren’t blowing bubbles or mercilessly chanting their well-known ball call or the names of UT freshmen pitchers Nico O’Donnell and Kamron Fields, Texas A&M fans had plenty to yell about in the first frame.

O’Donnell’s seventh start of the season lasted only one out. O’Donnell loaded the bases on a single and two walks, and he was pulled after allowing a two-run single to Will Frizzell. Fields relieved O’Donnell and was greeted by a Cole Bedford single that plated two more runs.

Texas rallied in the fifth inning behind three RBIs from Clemens and Zubia, who extended his on-base streak to 34 games. Texas A&M clean-up hitter Hunter Coleman delivered a game-deciding two-run single in the sixth inning. Coleman’s two-out insurance was cashed in after he fouled off seven pitches from UT reliever Bryce Elder, and five of those fouls came with two strikes.

Elder walked the two runners who scored on Coleman’s hit.

“The two hitters that scored were the problem because they were their two fastest guys and they were base on balls,” Pierce said. “He had a good battle with Coleman.”

Around the bases: Texas A&M covered their on-deck circles with tarps that adorned the initials and number of former UT baseball coach Augie Garrido. Garrido, 79, passed away last month, and a memorial service was held at the Erwin Center on Monday. Garrido went 40-21 against Texas A&M from 1997-2016. … An announced crowd of 7,537 was the largest at Blue Bell Park since 2012. … Texas right fielder Austin Todd was ejected after he drew a line in the dirt following a strikeout in the eighth inning. By rule, he will miss UT’s game at Oklahoma on Friday. … The last three games in UT’s series with Texas A&M have each been decided by a run.

Texas WR Collin Johnson has high hopes; ‘I definitely want to be that elite guy’