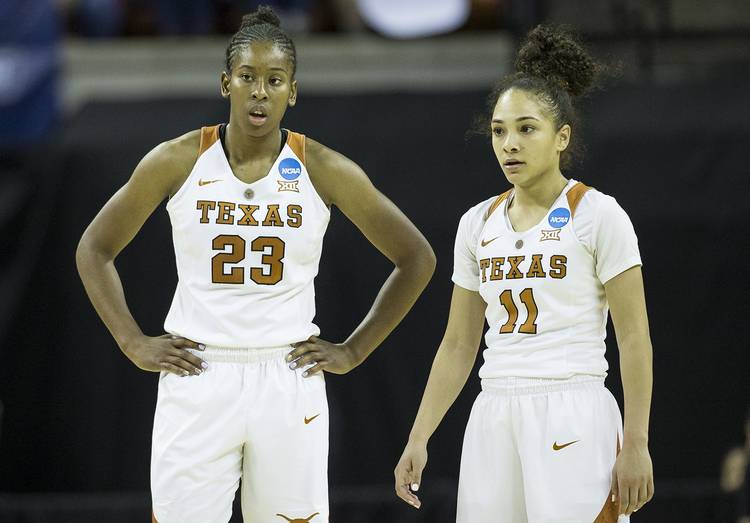 Ariel Atkins and Brooke McCarty will gather at Karen Aston’s home Thursday night to learn whether they have a future in the WNBA.

A total of 36 players will be chosen during the three-round draft that begins at 6 p.m. and will be televised by ESPN2. Both Longhorns said they are eager to begin a new chapter in their basketball careers.

“This is something I’ve worked for my entire life,” said Atkins, a 5-foot-11 shooting guard. “My family sacrificed a lot for me to even come to Texas. To get to the next level will be a dream come true.”

McCarty and Atkins will be represented by the same sports agent, Patrick Arryn, who is based in Temple.

McCarty, a 5-4 point guard, said she started thinking she might have a future in the WNBA when she was a sophomore at UT.

“It’s weird just to say I might be able to play basketball for money,” she said.

Most WNBA mock drafts have the Texas duo being chosen by one or two of the league’s 12 clubs. Imani McGee-Stafford, a 6-7 post, was the most recent Longhorn to be drafted, a first-round pick of the Chicago Sky in 2016. She averaged 5.3 points and 4.8 rebounds this past season in 16.1 minutes per game.

ESPN reporter Mechelle Voepel also has projected Atkins to land with New York as a first-round pick, but Voepel has McCarty as the first pick of the third round, No. 25 overall, going to the Las Vegas Aces, formerly the San Antonio Stars.

During a teleconference call last week that included three WNBA coaches and a pair of ESPN analysts, Atkins and McCarty were lauded for their ability and their team’s style of play.

“The one thing about Brooke and Ariel that will benefit them at the next level is that they played where they played fast,” said analyst LaChina Robinson. “Karen (Aston) loves her team to play fast. They get up and down the floor. That’s one thing that sets players apart.”

WNBA coaches Bill Laimbeer of Las Vegas and Pokey Chatman of the Indiana Fever said the WNBA prefers “big guards.” That would bode well for Atkins but could present a problem for McCarty.

“It’s one of those things where (a shorter guard) can run a team, be vocal, get the ball (to her teammates),” Chatman said. “Some of those things will stand up (well) for Brooke. She’s small. Some of those shots she takes, she’s not going to get them off and the court shrinks when you’re in the paint.”

Robinson had a different take on McCarty, saying: “She reminds me a lot of Leilani Mitchell (a 5-5 point guard for the Phoenix Mercury), who has had a great career in the WNBA. With Brooke, you know what you’re going to get — all-out effort. She can get up and down the floor and has a dependable three-point shot.

“She’s a tremendous leader. She’s very coachable, a mature player and I like her disposition.”

McCarty said she adjusted to playing against bigger guards throughout her college career and will have to make similar changes once she’s in the WNBA.

“I have to get better at a lot of on-ball things, get through screens and a lot of stuff you can get away with (in college),” she said. “But when you’re going against pros, you have to get on top of things.”

As for Atkins, Laimbeer praised her work ethic.

“She’s not spectacular at any phase of the game, but there are no major weaknesses either,” said Laimbeer, who won two NBA championships during his playing career with the Detroit Pistons before claiming three WNBA titles as coach of the Detroit Shock. “I think she’ll be a solid player whether she makes the team (this year) or not. … She’ll be a late first-round pick, maybe early second-round pick, but she’s a solid player.”