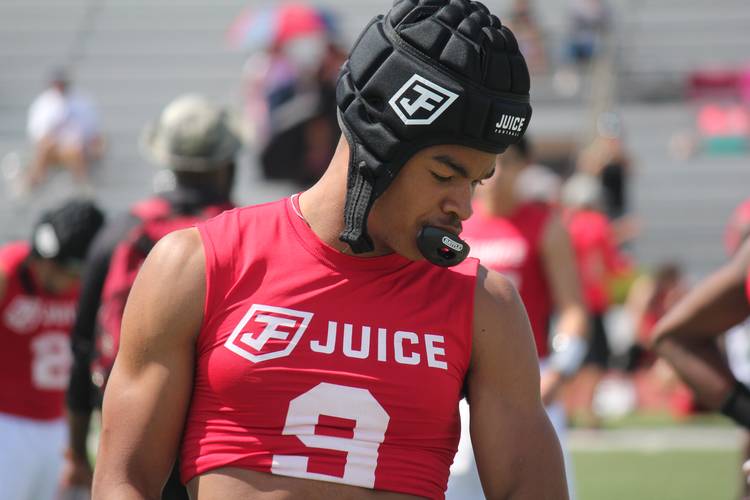 Texas tends to slow-play recruiting and that trickles down to the 2020 recruiting class. The Longhorns have only offered 13 sophomores in the state. Two of those players are expected to be in attendance on Sunday for the Under Armour All-America Camp Series, along with a handful of 2019 targets with offers. It’s never too early to know the names of the next batch of recruits the Longhorns will focus on this time next cycle.

Texas is in good position to land the nation’s top sophomore running back prospect. Evans is a true difference-maker and has drawn comparisons to Adrian Peterson as a prospect because of his size, speed and body shape. Evans looks like a grown man and he runs like one. He’s also a good enough pass catcher to play slot receiver and hurt teams in the screen game. Durability shouldn’t be an issue because of his size and physicality. He’s the top running back on Texas’ board in the 2020 recruiting class. Evans is the best running back from Texas since JK Dobbins, and he might end up rated even higher than the current Ohio State running back.

Texas loves long, tall cornerbacks who excel in man-to-man coverage. Texas defensive coordinator Todd Orlando wants to be aggressive and that can only happen when the Longhorns are equipped with elite defensive backs. McGlothern is the top in-state cornerback for the 2020 class and is the only true cornerback prospect in the cycle to hold an offer from Texas. It’s a two-man race for best player in the state between McGlothern and Evans. The Longhorns like their position with both prospects.

Texas has only offered two wide receivers in the 2020 class and only Demond Demas, a four-star wide receiver from North Forest in Houston is the only in-state prospect holding an offer at the position. It’s likely Sullivan picks up an offer by the end of his junior season. The Austin-area is flush with wide receiver talent in the 2019 class and Sullivan will continue that tradition in the following cycle. The Longhorns will be in great position if an offer is extended. He’s dominated the 7-on-7 circuit this offseason and is beginning to physically mature into his length.

McGlothern is the only cornerback with an offer. Texas could travel south to Cibolo Steele in the 2020 class to find a defensive back, much like it did in 2018 when it signed Caden Sterns. Jones is a similar prospect to Sterns. He’s long, fast and can cover in man-to-man situations. He’s also physical enough to transition to safety. Expect his offer list to explode by the end of spring practice. The Longhorns want to prioritize south Texas and hold a commitment from Cuero wide receiver Jordan Whittington in the 2019 class.

Parr is another San Antonio-based prospect with a high ceiling and potential to gain offers from each of the elite schools in the Big 12. Parr is a natural guard who can play center. He’s not quite tall enough to play tackle at the college level. Parr is an agile for his size and has the frame to add another 30 pounds of muscle. He’ll need to prove capable of dominating prep defensive linemen on a consistent basis before the elite offers fall his way. Texas has only offered one offensive linemen in the 2020 class and not a single prospect from Texas at offensive tackle or offensive guard.

The Dotted Line: Handful of top Texas targets ready to showcase talent at Under Armour camp

Continued success could equal Fabulous 55 status for handful of prospects