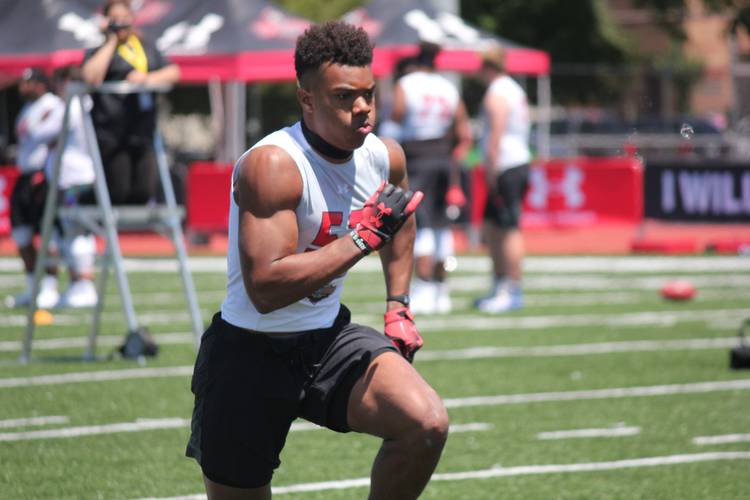 The four-star wide receiver and Texas target from Austin Bowie received an invite to the 2019 Under Armour All-America Game after a complete performance at the regional camp Sunday at Spring Westfield High School. Higgins is a physically dominant wide receiver who uses his body to create separation and is faster than given credit for in recruiting circles.

“I’m still not close to a decision,” he said before the camp. “I want to treat everyone recruiting me fairly and visit the out-of-state schools high on my list like Arkansas, Ole Miss and Stanford in May. Then I can narrow it down to (where I want to take official visits).”

Prom will prevent Higgins from attending the Orange-White game in Austin next weekend, but he plans to stay around the program and he’s undoubtedly familiar with the city after a decade of residing in the area.

“I love the culture at Texas and in the city. It’s a great place to live and go to school,” Higgins said. “I’d know I’d have a lot of support if I chose Texas and they’re recruiting me hard. Texas is Texas.”

Two teams pushing the Longhorns for his commitment are Stanford and Ohio State. Higgins isn’t a sure-fire future Longhorns just because he plays football up the street. Texas is in good position, but there are legitimate threats out there if Higgins decides distance isn’t a factor.

“Stanford is a draw because of the education. It’s probably one of, if not the, best school in the nation,” Higgins said. “Ohio State does a great job staying in contact for an out-of-state school, and not all programs do that because its hard to get the best players to leave Texas.”

Another one of the great local players facing a similar decision is Garrett Wilson. Higgins and Wilson are close and the two have discussed playing college football together. Wilson is down to Texas and Ohio State. He visited the Buckeyes last week and is set to visit Texas this weekend for the spring game.

“I already know where he’s going. I’m excited for him,” said Higgins of the upcoming decision from Wilson. “His decision has some impact on me, but we’ll each go to the school that is our best individual fit. It would be cool if that was the same place because we’re Austin boys.”

Texas cornerback target Chris Steele announced that he’ll commit to a school on July 7. The 5-star prospect from St. John Bosco High School (Calif.) visited Oklahoma over the weekend and came away impressed, launching the Sooners into the conversation with the Longhorns, USC and others.

Texas offered Steele during his junior season and has had him on campus for an unofficial visit.

The date is officially set. I will be committing On July 7th… #Shhh

The Longhorns went to California to sign quarterback Cam Rising in the 2018 class and already hold a commitment from De’Gabriel Floyd, a fellow Californian in the 2019 class. Texas’ top in-state target at cornerback is Marcus Banks of Spring Dekaney and its also in good position with Georgia native Kenyatta Watson II, who will take an official visit to Texas at the end of April.

Steele is the best cornerback on Texas’ board and would represent a major out-of-state recruiting victory for the Longhorns. Steele holds 45 offers and is ranked as the No. 27 overall prospect and the No. 3 cornerback in the 2019 class, per 247Sports Composite.

It was a busy recruiting weekend for Texas’ recruiting rivals. Oklahoma began the weekend by gaining commitments from a trio of Fabulous 55 members. The four-star wide receiving duo of Arjei Henderson and Theo Wease Jr., both ranked in the top 10 of the 2019 Fabulous 55, joined defensive back Jamal Morris in pledging to Lincoln Riley’s program.

Oklahoma now holds a total of six commitments off the Fabulous 55, including three of the top 10 players. The Sooners didn’t sign a single top-15 player from Texas in the 2018 class. The resurgence inside the state plus the addition of Jimbo Fisher at Texas A&M means the 2019 cycle won’t be as easy for the Longhorns to dominate as it was for the crop last year.

Texas A&M also picked up a commitment from three-star tight end Baylor Cupp after an unofficial visit to College Station for the spring game.

Continued success could equal Fabulous 55 status for handful of prospects