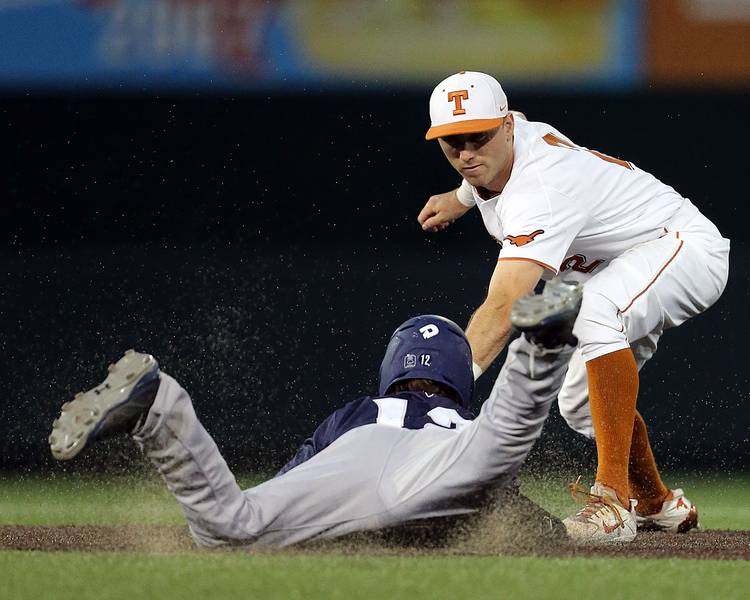 Texas freshman Zach Zubia hit a go-ahead home run in the eighth inning, and Josh Sawyer made a key appearance out of the bullpen in UT’s 8-6 win on Friday. Texas fell behind 4-0 to the Privateers, but the nation’s 21st-ranked team rallied to improve its record to 27-14.

The comeback marked the third time in the last month that UT tied a game it trailed by at least four runs in. The Longhorns also scored three runs in the ninth inning of a 7-6 win at Oklahoma on April 13.

“We come out here and we take it one pitch at a time, one inning at a time,” Zubia said. “This game’s a marathon, it’s not a sprint.”

When you know, you know. @zachzubia's 9th 💣 of the year was a big one. #HookEm pic.twitter.com/LQwJB22Dyl

Zubia entered the game with an on-base streak of 39 games, and he quickly extended that feat with a first-inning single. The next three at-bats for Zubia featured the designated hitter being walked, hit by a pitch and reaching base on an error. With the game tied 6-6, Zubia’s decisive trip to the plate then led off the eighth inning.

It was the ninth home run of the season for Zubia, who is now hitting .301. In each of the past two weeks, Zubia has won the Big 12’s Newcomer of the Week award.

“He’s such a smart hitter,” Texas coach David Pierce said. “He understands pitchers as well as any young player I’ve ever had.”

Just your regular ol' 1️⃣2️⃣3️⃣ double play to escape a bases loaded, no out jam. We 👀 you, @JoshSawyer30. pic.twitter.com/naTflKHAeL

Zubia’s big swing made a winner out of Sawyer, who threw only six pitches on Friday. After UT reliever Parker Joe Robinson loaded the bases in the eighth inning’s top half, Pierce played the match-up game and called on Sawyer with a left-handed Privateer at the plate.

A 6-3 southpaw, Sawyer struck out New Orleans designated hitter Scott Crabtree for the inning’s first out. Two pitches later, he started a double play to get out of the jam.

“I knew there was a righty on deck, so my goal was actually to strike out the first lefty and try to get a double play after that because I’m pretty successful with lefties,” Sawyer said. “It worked out picture perfect. It’s exactly what I was thinking about doing.”

Sawyer did not realize he was the game’s winning pitcher until teammate Jake McKenzie pointed it out to him. It was his first victory since a five-inning start against Texas State in 2015. Sawyer missed much of the past two seasons with a series of injuries, and he had not factored into any of his 16 appearances this year.

Around the bases: Texas starter Nolan Kingham scattered nine hits over seven innings, and five of his six runs were allowed in his first and final frames. Kingham, whose ERA rose to 4.29, had failed to get more than two innings out of either of his previous two starts. … Texas junior Kody Clemens hit his 13th home run of the season during a four-run fifth inning. He has now exceeded the 12 homers hit by his older brother, Kacy, in 2017. … UT shortstop David Hamilton entered the weekend ranked fifth nationally in steals, and he swiped his 24th bag on Friday. … Texas batters were plunked by five pitches.