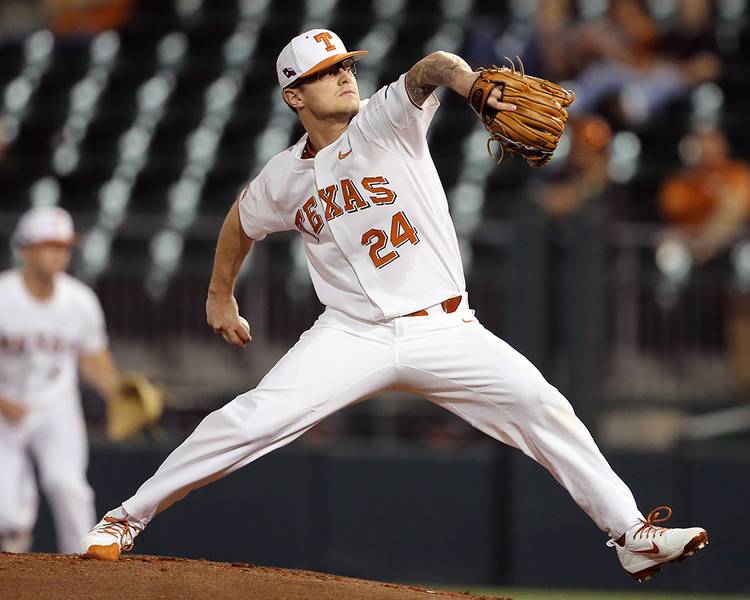 In the No. 21 Texas Longhorns’ most recent string of games, they have relied on their offense to tally up the runs and have as much of a cushion as possible for their pitchers. Either that or the Horns have erased multiple-run deficits and come back to win.

But on Saturday afternoon, Texas needed no comeback. And its starting pitcher need as little of a cushion as possible. The last time Chase Shugart pitched at UFCU Disch-Falk Field, he threw seven innings and allowed no runs in the best outing of his burnt-orange career. He topped himself in the Horns’ 3-1 win over the New Orleans Privateers.

Shugart, a junior reliever-turned-starter this season, pumped out a career-best 7 2/3 innings, allowing one run, striking out five and exiting the mound in the eighth inning to a roaring ovation from the announced crowd of 5,203 who hadn’t migrated across Interstate 35 to watch the UT football spring game.

With a runner on second and two outs in the eighth and Texas leading 2-1, UT coach David Pierce went out to the mound for a pitching change. Shugart, who had already thrown 101 pitches, asked to finish the inning. Pierce informed him he would rather bring in freshman Bryce Elder.

“I got him,” Shugart told Pierce.

Elder struck out the next batter, but a passed ball allowed him to reach first, and it moved the tying run 90 feet away. And, worse, it brought up New Orleans cleanup hitter Beau Bratton with a chance to tie the game with a single or maybe give the Privateers the lead with an extra-base hit. Elder struck him out looking.

Zach Zubia doubled with one out in the eighth — extending his on-base streak to 41 games — and catcher Michael McCann pinch ran for him. Texas hoped to get an insurance run for Elder in the ninth. Sophomore third baseman Ryan Reynolds roped a single to right-center, scoring McCann and giving Texas a two-run cushion.

New Orleans managed to get runners on first and second with one out in the ninth against Elder, but he didn’t let the Privateers rally. The next batter grounded out to the catcher and the final hitter grounded out to Elder, sealing the Horns’ 28th win of the season.

“The offense has been carrying the ballclub for the past couple of weeks, so it was great to see starting pitching go out and really perform,” Pierce said. “Chase did an awesome job against a really good hitting team, especially the top of the lineup.”

Shugart’s last start against Oklahoma resulted in a no-decision. In his first season as a starter, he has begun to grow more comfortable with his new role and has shown his endurance, throwing 120 pitches over seven innings in his last start at the Disch.

“I’m getting a little bit more comfortable with it,” Shugart said. “Whenever the ball is getting up, my lower half isn’t working correctly, so working with my lower half is really helping me out, and that’s what I was able to do today.”

Shugart got through the first inning on 11 pitches, the second on eight and the third on 11 again. He only allowed two hits over those three frames and walked no one. Against Baylor, Shugart called his own pitches for the first time since his freshman year, but this time Pierce called the pitches.

“Honestly, we didn’t talk about it; I just started calling the pitches, and that’s what we did,” Pierce said.

In the first, the Horns made sure to give Shugart a cushion for the rest of the game. Sophomore shortstop David Hamilton led off with a walk and stole second. Junior left fielder Masen Hibbeler singled back up the middle to drive Hamilton in. A double by Zubia moved Hibbeler to third, and then a sacrifice fly to center by freshman right fielder Andy McGuire scored Hibbeler, giving the Horns a 2-0 lead.

Shugart, however, did face trouble in the fourth. Three consecutive singles loaded the bases for New Orleans with no outs. Disaster loomed, but Shugart did not buckle. A sacrifice fly brought in a run but took care of an out. The next batter hit into an inning-ending 3-6-1 double play to minimize the damage.

“To be able to pick our hitters up today means a lot to us as a pitching staff because they’ve been picking us up for weeks,” Shugart said. “Hitting is going to be up and down either way, but our pitching has to be consistent.”