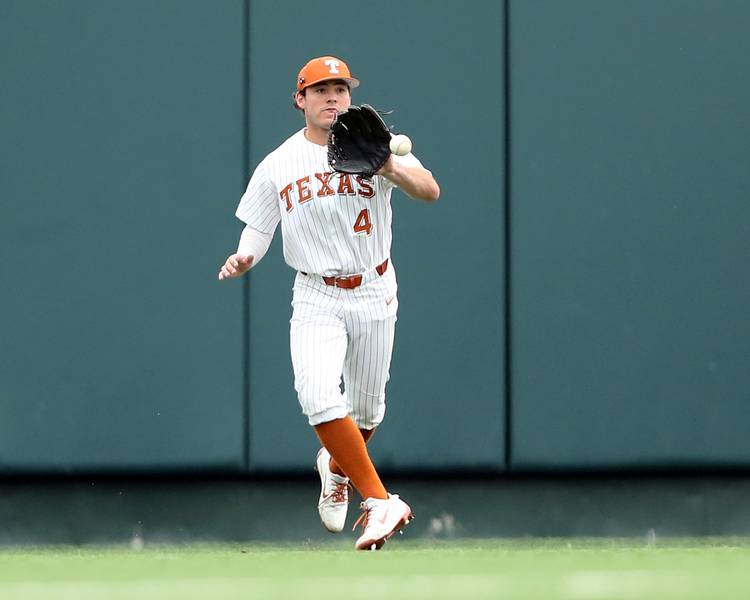 Texas outfielder Tate Shaw dropped a fly ball with two outs in the third inning Sunday. Two runs scored on the play, and another scored later in the inning. JAMIE HARMS / FOR AMERICAN-STATESMAN

In its bid for a perfect week, a strength became a weakness for Texas.

Three errors led to four unearned runs in UT’s 4-1 loss to New Orleans on Sunday. Texas had opened its week with four wins by a combined score of 34-11, but the three-run loss at home dropped UT to 5-4 in games played on Sunday. The Longhorns have closed their last two weeks with losses.

“It just didn’t work out today,” UT coach David Pierce said. “I thought they played really well and didn’t make any mistakes to open the door for us after we made a mistake on the mound.”

Texas entered Sunday’s game ranked among the nation’s top fielding teams. The Longhorns had nine multi-error games on their stat sheet, but only one of those featured three defensive miscues. Texas matched that number against the Privateers (18-24).

Junior center fielder Tate Shaw dropped a fly ball while retreating to the fence in the third inning, a two-out mistake that plated two runs and led to another score. New Orleans’ fourth run was scored on Jay Robinson’s sixth-inning single, but Orynn Veillon’s trip around the bases was aided by an error that was charged to right fielder Duke Ellis when he collided with Shaw on Veillon’s single.

Before Sunday’s game, Ellis had only two errors this season. Shaw, who had another defensive blunder in the eighth inning, had never committed an error in his collegiate career.

“I was a center fielder and I was a defender, and every now and then, you have one of those days,” Pierce said. “If he allows that to build, it’s going to be an issue. He’s got to just get over it.”

Texas avoided a shutout when Ryan Reynolds hit his fourth home run of the season in the seventh inning. UT matched New Orleans’ eight hits and struck out only five times. The Longhorns, however, stranded six hitters in scoring position against Privateer pitchers John Michael Stephens and Reeves Martin.

“I think we had eight or nine balls that we hit solid, and just no outcome,” Reynolds said. “Just one of those baseball days.”

Texas will return to UFCU Disch-Falk Field to play Houston on Tuesday. The game against the Cougars will be the finale of a six-game stretch against nonconference foes for UT. The Longhorns, who are 11-4 in conference play and battling for the Big 12’s regular-season title, will then travel to West Virginia for a three-game series.

Around the bases: An 0-for-4 performance Sunday ended freshman Zach Zubia’s on-base streak at 41 games. … Texas sophomore Blair Henley surrendered seven hits and dropped to 5-5 with the loss. The four runs Henley gave up over his 5 1/3 innings were unearned, so his ERA actually dipped to 3.05. … UT turned three double plays Sunday to boost its nation-leading total to 48. … Senior Jake McKenzie drew the Longhorns’ only walk. It was just the third time this year that Texas wasn’t issued at least two bases on balls.