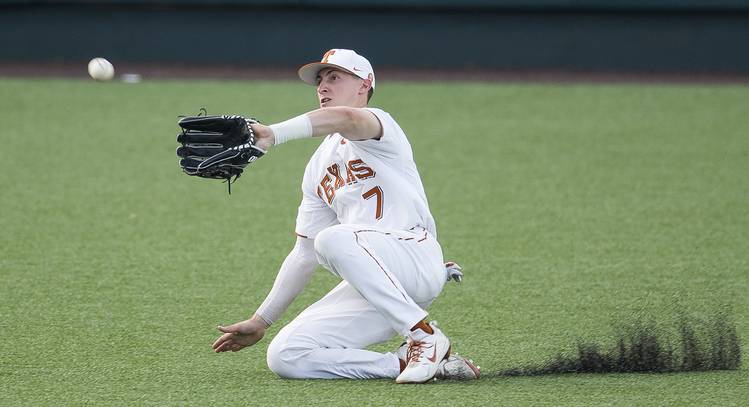 Texas outfielder Masen Hibbeler slides to make a catch during a baseball game against Houston in Austin on April 24, 2018. NICK WAGNER / AMERICAN-STATESMAN

Texas’ Longhorns picked up a win instead of style points on Tuesday.

Texas rallied from an early deficit in an unconventional win over Houston at UFCU Disch-Falk Field. The Longhorns were held to four hits — their second-lowest output of a 44-game season — but that number was trumped by UT’s margin of victory in a 9-4 triumph.

The Longhorns improved to 29-15 with the win.

“Never had a bad win,” Texas coach David Pierce said. “It was ugly, but we’ll take it. We’ll move on, learn from it.”

If you omitted the runs, Tuesday’s line score might initially read like a pitchers’ duel. Texas didn’t gather many hits against Houston’s four pitchers, let alone a big one. The Longhorns, though, still found a way to score nine times during the third and fourth innings.

Over those two innings, three Longhorns were hit with the bases loaded. Zach Zubia and Tate Shaw both drew a bases-loaded walk. Texas also scored on a wild pitch and a two-run error, and David Hamilton drove in a run on a sacrifice fly.

“I think we had great discipline,” said catcher DJ Petrinsky, who led off both innings with a single. “Not a lot of strikes, and we didn’t swing at the pitches they wanted us to swing at. I think it was pretty good.”

Like Texas, Houston did not drive in a run with a hit. The Cougars held a 3-0 lead after the second inning thanks to a run-scoring fielder’s choice and two RBI groundouts. In the seventh session, UH scored its final run on a wild pitch.

Texas started Tristan Stevens, who was making his second appearance following last year’s Tommy John surgery. Pierce had wanted Stevens to throw between 30 and 50 pitches, but the redshirt freshman was pulled in the first inning after 11 of his 16 pitches were balls and he loaded the bases with one out.

Five pitchers backed Stevens on Tuesday, and Houston was held to seven hits. Bryce Elder, who was credited with the win, allowed one hit and two runs over 2 2/3 innings. Fellow freshman Nico O’Donnell then gave the Longhorns 3 2/3 innings of two-hit relief.

O’Donnell has 11 appearances and seven starts to his credit, but he was pitching for only the second time since he failed to get out of the first inning at Texas A&M. The right-hander from San Antonio struck out four batters in the third-longest outing of the year.

After a stretch of six non-conference games, Texas will resume Big 12 play on Friday. With an 11-4 record against conference opposition, Texas is set to travel to West Virginia (20-18; 4-8) for a three-game series. On Tuesday, West Virginia and Texas were ranked 32nd and 33rd in RPI.

Around the bases: Infielders Jared Triolo and Joe Davis collected three of Houston’s seven hits. Triolo is a Lake Travis graduate, while Davis won the American-Statesman’s 2014 All-Central Texas Player of the Year award while playing at Bowie. … Right fielder Duke Ellis, who hit behind Petrinsky, earned UT’s other two hits. … Texas improved to 95-32-2 against Houston, a team that Pierce played for from 1984-85. … In the eighth inning, Texas left fielder Masen Hibbeler threw Houston’s Tyler Bielamowicz out at the plate. Hibbeler and Bielamowicz won a state championship together at Cypress Ranch High in 2015.

This laser brought to you by the arm of @masenhibbeler. #SCtop10 #HookEm pic.twitter.com/GOu7rOFlsj