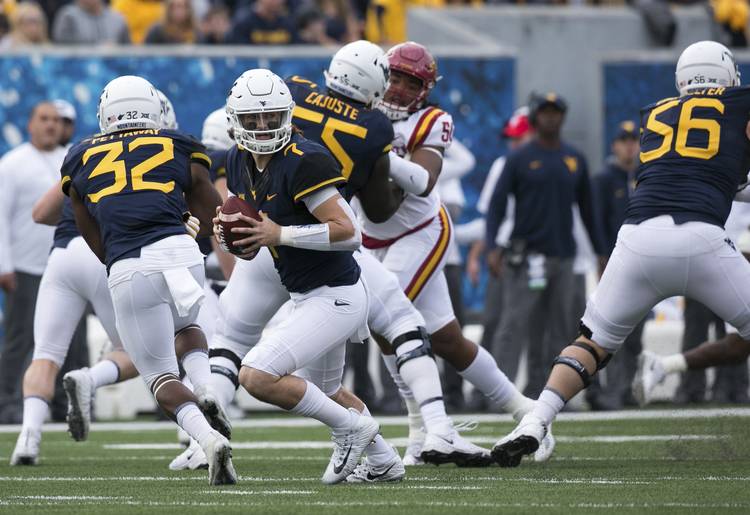 West Virginia quarterback Will Grier (7) rolls out during the first half of an NCAA college football game against Iowa State in Morgantown, W.Va., Saturday, Nov. 4, 2017. CREDIT: Associated Press

In the Big 12, it’s always the year of the quarterback.

You saw that in this year’s NFL draft. Oklahoma’s Baker Mayfield was the top selection. He’d headed to Cleveland. Oklahoma State’s Mason Rudolph was a third-round pick and through luck of the football gods, Pittsburgh also drafted Rudolph’s favorite receiver in James Washington.

Draft experts say that next year’s draft is going to be heavy on the big guys with defensive ends and tackles dominating the chatter. Ohio State’s Nick Bosa, the 263-pound kid brother of former first-rounder Joey Bosa, could be the top choice.

RELATED: Golden: Holton Hill has good chance of sticking with the Vikings as a free agent

Or you could add Mississippi offensive tackle Greg Little to be the potential top dog. The former star of Allen High School is viewed by some analysts as the top offensive tackle next year.

But here in the Big 12, it still is all about the quarterback when it comes to the draft.

West Virginia’s Will Grier could be the conference’s most coveted prospect. NFL coaches are starting to fancy mobile quarterbacks, putting less of a rigid emphasis on size and super-human arm strength. Look at who they’ve drafted from the Big 12 in the past two first rounds — Mayfield and Texas Tech’s Patrick Mahomes. Word out of New England, Tuesday, was that the Patriots had been eyeing a trade with the New York Giants to move to No. 2 last Thursday to select Mayfield if the Browns had passed on him with the top choice.

Grier is one of a handful of quarterbacks drawing draft buzz who can give an offensive coordinator an added dynamic in their play calling.

“Grier has a massive arm, and teams will be attracted to his mobility, which will allow coordinators to install some different run pass-options and zone-read concepts to diversify the run game,” says Sports Illustrated analysis of next year’s quarterbacks class. “Outside of (North Carolina State’s Ryan) Finley, most of the top FBS quarterbacks in the 2019 draft will have an option component to their game, which is a sign of the times. Could it be that NFL teams waiting too long to alter their approach will miss out on some quality quarterbacks?”

RELATED: The 2019 NFL mock drafts: Yes, they exist already, yes there is a Texas Longhorn on them

Another quarterback who will be figuring into the draft mix is Auburn’s Jarrett Stidham, who transferred from Baylor in 2016 after Art Briles was fired as head coach.

And if it’s not Grier as the top Big 12 prospect, maybe it’s his Mountaineer teammate David Sills V, the receiver who was the best in the country last fall at catching touchdown passes.

It should be noted that draft projections a year ahead of time don’t mean much.

But here’s something we do know: The Big 12 produced 20 NFL draft picks this year. That’s up six from last year’s woeful total of 14, when they were last among the Power 5 leagues. With 18, the American Athletic Conference even produced more draft picks than the Big 12 did in 2017.

The Big 12 still produced the fewest of any of the Power 5 conferences this year. But with 10 teams, it is also the smallest major conference.

Here’s a look at some Big 12 players who are drawing ever-so-early draft attention and may be included in someone’s first-round wish list: