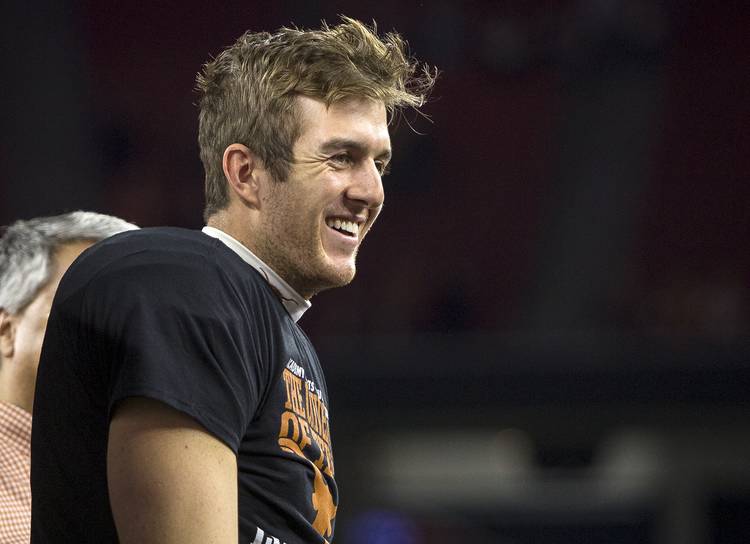 Texas punter Michael Dickson (13) smiles during the award ceremony at the Texas Bowl in Houston on Dec. 28, 2017. NICK WAGNER / AMERICAN-STATESMAN

When the news broke, Michael Dickson called his parents via FaceTime in Australia, where it was about 2 a.m. The Texas punter was now a Seattle Seahawk.

“Just a lot of yelling and screaming,” Dickson said of his family’s reaction to last Saturday’s NFL draft news. “I feel like I was just a zombie. After that, just couldn’t really express anything. Felt like a zombie.”

Seattle actually traded up with Denver, giving up two lower-level picks to acquire the 149th selection in the fifth round, a move that drew guffaws in some NFL corners. Dickson became the fourth Longhorns punter drafted and the highest punter taken since Cal’s Bryan Anger was a third-rounder in 2012.

For the UT trivia hounds, Russell Erxleben (first round, 1979), John Goodson (eighth round, 1982) and John Teltschik (ninth round, 1986) were the other Longhorns punters taken previously.

Punters do get drafted regularly, although typically in the sixth and seventh rounds. Maryland’s Adam Podlesh and Baylor’s Daniel Sepulveda were both fourth-round picks in 2007. There’s been at least one punter taken every year since up to 2017.

Dickson, who leaves for Seattle’s rookie mini-camp on Thursday, called the Seahawks’ decision to trade up “a massive compliment.” Seattle coach Pete Carroll told the Ray Guy Award winner he will compete against the team’s current punter, 12-year-veteran Jon Ryan, who averaged 45.0 yards a punt last season, which ranked fifth in the league.

“And whoever’s the best man will win the job,” Dickson said. “I’m looking forward to the competition.”

Asked if he’s ready for an NFL paycheck, Dickson demurred. “I just want to win the job,” he said. “I care more about the punting and me being good at punting than I do the money. That sounds a little weird to say, but it’s the truth. I’m really just focused on wining that job and trying to leave a footprint in the organization.”

Dickson’s also made an impression on his cousin, UT freshman Ryan Bujcevski. The early enrollee is tracking the same path as Dickson. He went through spring practice and is projected to be the team’s starting punter this fall.

“We’re really close. We’re like brothers,” Dickson said. “Now we’re both going through a similar sort of process, trying to win a job and trying to play for a new team. So we’ll be able to go through that together.

“I’ve tried to teach him as many things I can, things I wish I knew as a freshman coming in.”

Dickson won’t be alone at rookie mini-camp this week. The Seahawks have become a home away from home for various Longhorns.

Long-time safety Earl Thomas became a three-time Pro Bowler and Super Bowl champion in Seattle. Reports surfaced last week that he was being used as trade bait with other teams, including the Cowboys.

Every one of the new Seahawks are probably just glad the whole draft process is over. Dickson sure is. “It was pretty stressful,” he said, “but it’s been a relief knowing that a team wanted me.”

Michael Dickson, drafted in the fifth round with the 149th overall pick, was the earliest punter taken since 2012, when the Jacksonville Jaguars took Cal’s Bryan Anger in the third round with the 70th pick. Twenty punters have been selected over the past 10 drafts: