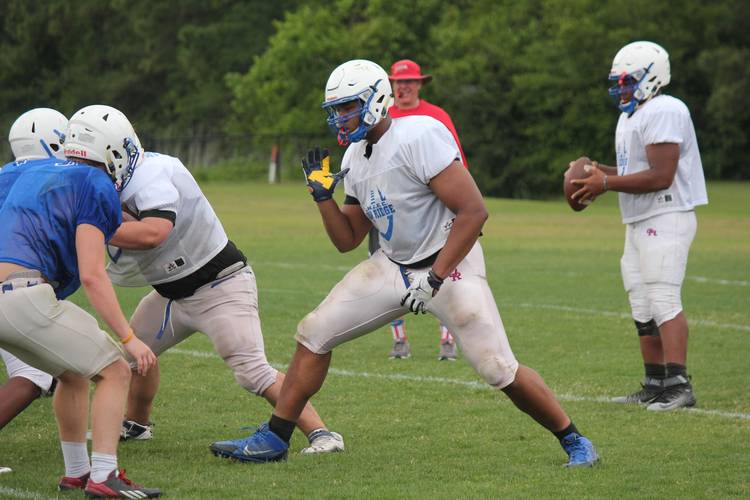 Conroe Oak Ridge offensive tackle Tyler Johnson wasn’t always considered the best offensive linemen in the state. He came onto the scene as a junior and doesn’t hit the camp circuit like other big name big men on the recruiting trail.

Instead, the 6-5, 308-pound prospect does his talking when the pads come on, like he did Monday when Oak Ridge began spring practice. Johnson is the No. 15-ranked player on the initial 2019 Fabulous 55 and will be included in the top 10 once the list is updated this summer.

“It was awesome to put pads back on,” Johnson said after practice. “I was watching highlights of college football on YouTube the other day just to get pumped for this. I was ready. From freshman year to now, I’ve developed more than I could have I ever imagined.”

Johnson recently gained a fifth star and saw his overall national recruit ranking to No. 31 and No. 6 among tackles. He holds offers from programs like Texas, Oklahoma and Alabama. He took an official visit to Oklahoma in April and will begin his official visit to Texas on Friday.

That doesn’t mean the work is done. Johnson watched tape of his junior season and noticed a trait he’s ready to fix as a senior.

“I wasn’t getting off the ball quick enough when I watched film. I need to be one of the first players off the ball,” he said. “I also want to work on my pass sets and overall footwork.”

It’s true that iron sharpens iron. Not much is gained from a big five-star prospect pushing around smaller players for two hours of practice. It was a luxury for Johnson to face former teammate Joseph Ossai each day in practice. Ossai, who signed with Texas in February, taught Johnson an early lesson during the spring of his freshman season.

“Freshman year in spring ball is first time I went against Joseph. I didn’t expect him to be that good and he got me,” Johnson joked. “By sophomore year, I started developing and we both kept getting better by going against each other. I won some and lost some.”

Ossai is also fond of those memories when he could beat the massive offensive lineman with ease. It stopped in 2017.

“He’s grown a lot. My sophomore year, I could tell him the moves and still beat him,” Ossai said Monday while watching Oak Ridge partake in spring ball. “By senior year, I couldn’t do that better. He learned the technique and the coaches have done a great job helping him. He’s huge and getting stronger now.”

It’s natural that Ossai nudges Johnson toward Texas. The former four-star defensive end knows that Johnson is a priority for the Longhorns’ offensive staff. Ossai also knows what it’s like to face recruiting attention.

“I don’t tell him how to handle it, but I try to help him on the football field,” Ossai said. “I don’t push that on him because I hated when people did that to me. It’s his life and his decision and he needs to do what is best for him.”

It’s a bond Johnson cherishes as Ossai readies for his freshman season in Austin and Johnson prepares for his final season at Oak Ridge. The two could reunite in the future. It won’t change the duo’s relationship if Johnson goes elsewhere, and that’s why Johnson respects Ossai so much.

“We’re brothers,” Johnson said of his former teammate. “He wants me to go to the same college as him, but it is my decision. He knows that and wants me to do what I want for me.”

Johnson isn’t in a hurry to announce his college destination. That could change after the official visit to Texas this weekend, of course, but for right now he’s comfortable taking his time and weighing his options. He can still take three official visits after his trip to Austin.

“I’m still open and probably going to wait until signing day to announce my commitment,” he said. “I’m planning on releasing my top schools list this month. Texas is up there.”

“I’m real cool with Tope. Get a chance to hang out in the city with for a couple of days instead of a couple of hours,” Johnson said about his upcoming visit. “It’ll also give me a chance to meet more of the players and continue the relationship with coach Hand and the rest of the staff.”

Just don’t expect a decision shortly unless something drastically changes.