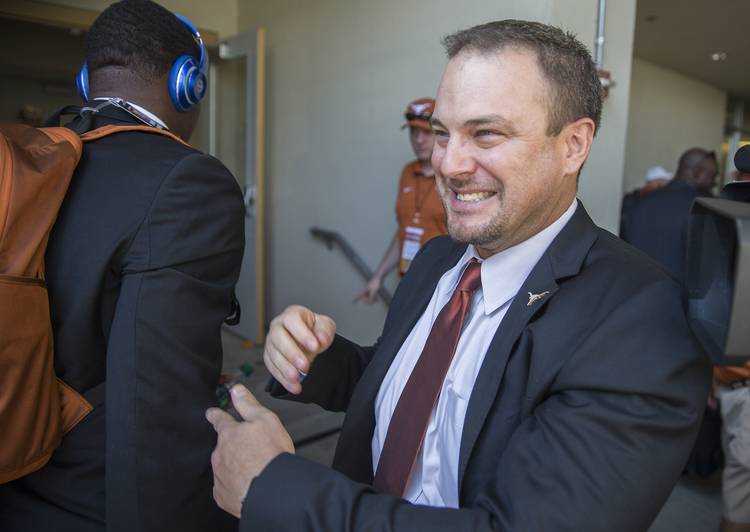 Texas picked up its sixth commitment of the 2019 cycle when Brayden Liebrock (Ariz.) pledged to the Longhorns. (Statesman)

The Longhorns added a future playmaker at the tight end position on Tuesday when three-star Brayden Liebrock of Chandler, Ariz. picked Texas over offers like Arizona State, Cal and Ohio State. Liebrock is a 6-5, 220-pound tight end who excels as a pass catcher and possesses the frame to add weight and improve as an in-line blocker.

He is Texas’ sixth commitment of the 2019 class, and the third from outside the state, joining California outside linebacker De’Gabriel Floyd and Georgia cornerback Kenyatta Watson II. Liebrock is the first tight end to pledge to Texas in the 2019 class, and the Longhorns could be done recruiting the position in the cycle if scholarships don’t allow for a second target.

Skill set: Liebrock is a big-bodied tight end with great length to grow into a three-down player. He’s light and will need to add weight and strength before he can take on defensive ends and linebackers in the running game, but he’s already 220 and could easily reach 240 by the time his freshman year begins. Liebrock is an excellent pass catcher and route-runner.

He’s a mismatch nightmare for defenses because of his height. He’s too athletic for linebackers and safeties, and too big for cornerbacks. That makes him a threat on third downs and in the red zone. Liebrock also understands how to use his body and length to shield off defenders.

Liebrock is the No. 13-ranked tight end in the country and the No. 382-ranked overall player in the cycle, per the 247Sports composite ratings. It would be a surprise if Liebrock wasn’t awarded a fourth star by the end of his senior season. His offer list included the best programs in the nation and he proved at elite camps in the offseason that he can compete with the nation’s best.

Immediate impact: Texas’ need for immediate help at tight end should be alleviated by the time Liebrock arrives on campus prior to the 2019 season. Former Lake Travis star Cade Brewer showed promise in his freshman campaign. Snaps are always open for incoming players who thrive early in their career under Tom Herman and Texas pushes the need for immediate help on the recruiting trail.

The Longhorns hope Reese Leitao makes an impact as a redshirt freshman, and four-star signee Malcolm Epps from the 2018 class enrolls this summer. Texas also moved former defensive lineman Max Cummins, a redshirt freshman, to tight end this spring to provide help as a blocker.

Fitting into the program: Liebrock is part of an early out-of-state trend for the Longhorns in the 2019 class. Half of the current class plays prep football outside of the state, as do numerous top remaining targets on the board. Liebrock brings the ideal skill set to the tight end position because of his combination of length, the potential to add weight and his already elite pass catching skills. He’s the type of versatile tight end Herman wants to utilize in Texas’ offense.

Recruiting at the position: Depending on the scholarships available in the 2019 class, Texas could close shop at tight end with Liebrock’s pledge. Brewer, Leitao and Epps will all have at least two years of eligibility remaining when Liebrock arrives on campus. That would give Texas four young tight ends heading into the 2019 season, plus a physical presence in Cummins. Temple tight end Jared Wiley appears to be the in-state target Texas would chase if two tight ends are the goal this cycle.