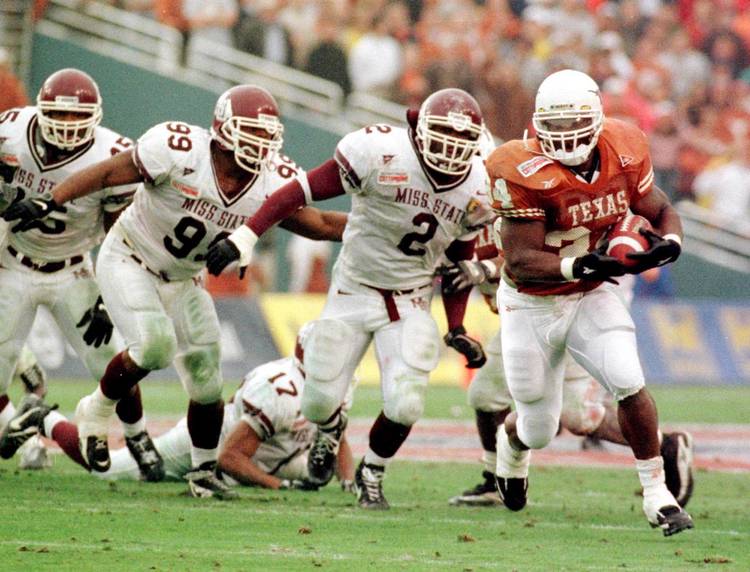 Texas running back Ricky Williams outruns the entire Mississippi State defensive unit to the end zone for the first of his two touchdown runs during a 24-point third quarter against Mississippi State in the 1999 Cotton Bowl. Ralph Barrera/American-Statesman

ARLINGTON — Two weeks away from his 41st birthday, a nattily-dressed, bearded Ricky Williams glanced over his shoulder Tuesday at a poster of some hulking brute from the 20th century.

For a man now living in the Los Angeles area who studies Chinese medicine and has developed a serious interest in astrology, the photo was just plain odd. Studying game film was then for Williams; studying the stars twice a month at the famous Griffith Observatory is now.

“It does seem so distant,” Williams said, glancing at the image that’s almost two decades old, “and sometimes I hardly recognize the kid in burnt orange.”

Anyone who catches Williams by the coattails these days best hold on tight. It’s never clear when you’ll see this comet again, armed with the Hubble or not.

On Tuesday, Williams was at AT&T Stadium to be inducted into the Cotton Bowl Hall of Fame, fully aligning himself with the game’s kindred spirit Doak Walker. That fella on the poster sure did a number on Mississippi State that rainy New Year’s Day in 1999, tuning up the Bulldogs for 203 rushing yards and scoring twice.

As it turns out, not everybody accepts the honor. Texas A&M’s Martin Ruby was the bowl game’s MVP in 1942. He, along with others, swore the Navy enlistment oath at halftime. Ruby was named MVP again in 1944 playing for Randolph Field. The military installation tied Texas, 7-7.

Charlie Fiss, who oversees the Hall of Fame voting and invitations, said organizers tried to induct Ruby in the early 2000s.

“I talked to his wife and she said, ‘Charlie, you can talk and talk and talk. He’s just not going to come,’” Fiss said. “He didn’t want to leave his farm to somebody to run while was away. So he declined.”

Every new Cotton Bowl Hall of Fame member spoke briefly at a ceremony inside AT&T Stadium while highlights rolled. With Williams, there were plenty from Texas’ 38-11 win over Jackie Sherrill, the former Aggies coach who wore a similar shade of maroon while coaching Mississippi State that day.

The first was a 37-yard touchdown run that left Fox broadcaster Joe Buck in full lather. “The starting receivers are out of the lineup, so you expect the run,” Buck told viewers. “And you get it with Ricky Williams! Up the middle of the field. Ricky Williams, touchdown, Texas!”

The 1998 Heisman Trophy winner struck the signature pose in the end zone.

“If it was a 2-yard run, I wasn’t going to get up and strike the pose,” Williams said. “It was so fitting, my last game in the house that Doak built, a 37-yard touchdown run. I had to strike the pose.”

The second touchdown wasn’t memorable for its length but for its finish. Williams lowered his shoulder and simply buried MSU safety Anthony Derricks at the 2-yard line. Poor guy never had a chance.

The coaching staff always told Williams that the play design and offensive execution will account for 10 defenders. The running back was responsible for the lone wolf. The free safety came free, Williams said, and tried to fill the hole. Tried.

“My last touchdown as a college football player, to leave my mark like that, and run somebody over, it was great,” Williams said.

Of course it’s easy to block for two future NFL runners. Former Texas lineman Jay Humphrey helped pave the way for Priest Holmes and Williams, who at the time was known for his dread locks, visor and piston-churning thighs.

“They put their hand on your hip to let you know where they were,” said Humphrey, now a chiropractor in Rockwall. “It’s a whole lot easier to throw a block when you know where your running back is in space. Both of them were very gifted when it came to running the rock.”

Cotton Bowl president Rick Baker took one look at Williams and quipped, “I think he can almost play again.”

You’d get no quibble out of Gil Brandt, longtime NFL personnel man who’s just about seen ’em all. “I’m so happy the way he’s turned out,” Brandt said. But what’s remarkable is that Williams played in that bowl game at all. Nowadays, first-round draft picks — or those who think they’re first-rounders — will skip a bowl game entirely.

“He’s a first-round draft choice, so how much do we use him in the game?,” former UT coach Mack Brown said Tuesday. Williams told the coach he had three priorities.

“I am going to play.

Brown had no issues with that.

“Modern day where I see kids passing up bowl games, that’s not something Ricky Williams would’ve ever thought about,” Brown said.

Nobody starts out thinking about getting into the Cotton Bowl Hall of Fame, either. With Williams, it’s just another intriguing moment in his impossibly imaginative life.

“Sometimes I forget that I played football,” Williams said. “It’s nice to have events like this to remind me.”