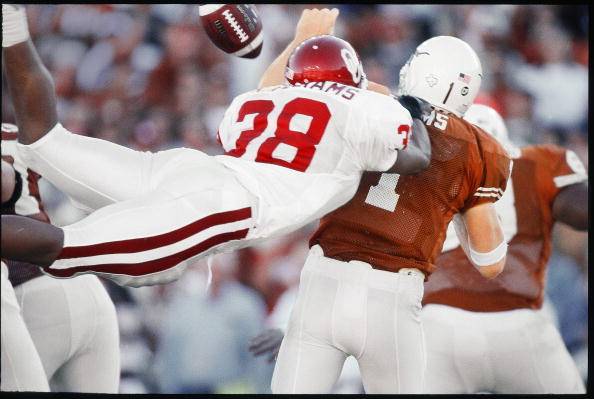 Oklahoma's Roy Williams (38) leaps over the line of scrimmage and hits Texas quarterback Chris Simms, knocking the ball loose. Teddy Lehman intercepted the pass and returned it for a touchdown in the 2001 Texas-OU matchup. John Biever/Sports Illustrated

ARLINGTON — Superman has to be in the Cotton Bowl Hall of Fame, right?

Well, the single greatest play in Roy Williams’ Oklahoma career happened in the Cotton Bowl stadium. OU fans remember him flying over the line of scrimmage and batting a Chris Simms pass that Sooners linebacker Teddy Lehman intercepted for a touchdown in the 2001 Texas-OU game.

Williams has long maintained that he was not supposed to leave his feet at the line of scrimmage, per the OU coaching staff’s orders. However, he did it anyway, leaping into college football history in the process.

He was practically a super man that day, too. Williams had six tackles, three tackle for loss and two sacks in OU’s 10-3 win.

“I’m never able to forget about that (2001) play, because everybody wants to talk about that play,” Williams said. “I actually just got back on social media, and when I posted that I was being inducted, people said, ‘You should have been inducted right after that game.’ They’re talking about the Texas game. People don’t know this is for the Arkansas game.

“That play will forever be in Oklahoma history, which is awesome,” he added. “I would have never thought that I would be a part of OU history. I thought I would be just one of many guys who walked those halls and played ball there. I’m honestly just floored that I got the call to be a part of this.”

Williams, 37, looked resplendent in a pinstripe suit. He wore a Cowboys-themed star on his lapel to honor his time with the Cowboys. Williams finally got to see that photo in owner Jerry Jones’ suite that he’s heard about all these years. “It’s in a bathroom stall!,” he said.

Former OU coach Bob Stoops was one of several Sooners on hand to congratulate Williams.

During his time at the Cotton Bowl, Williams said he remembers his trip to the hospital to meet with sick children and all the gifts the players received. Asked if the Arkansas game was one of his best at OU, Williams said, “I don’t know. If I didn’t have so many damn concussions, I’d be able to tell you. That’s just the honest truth.”

Apologizing to Mack: Only six coaches have guided more than one school to the Cotton Bowl. Houston Nutt is 3-1 in four appearances after leading Arkansas (2000 and 2002) and Ole Miss (2009 and 2010) to the game in the last decade.

“I’m really good friends with (former Texas coach) Mack Brown right now, and we went to Baghdad together,” Nutt said. “He was upset at me about the ‘Hook ’em, Horns’ sign down, and I apologize 100 percent.”

Nutt grew up as an Arkansas fan and, given the heated history between the two schools, a lot of pent-up emotion was released. Texas holds 53-22 edge in the all-time series.

As for whether Arkansas athletic director Frank Broyles had any issues with it, Nutt said, “No, no he didn’t. He was happy about the game. I’ll leave it at that.”

Coryatt honored: Texas A&M’s Quentin Coryatt is known for “The Hit,” a vicious 1991 blow on TCU receiver Kyle McPherson. It was one of the most devastating plays during the Aggies’ “Wrecking Crew” heyday.

“The gentleman got hurt during the play, so it’s something I’m not proud of today,” Coryatt told TexAgs.com prior to Tuesday’s induction ceremony.

Florida State’s Casey Weldon also was on the receiving end of a punishing hit from Coryatt in the 1992 Cotton Bowl. Weldon was dropped for a safety for A&M’s only points in a 10-2 loss. Still, Weldon threw for a season-low 92 yards as Coryatt had 15 tackles, 10 unassisted.