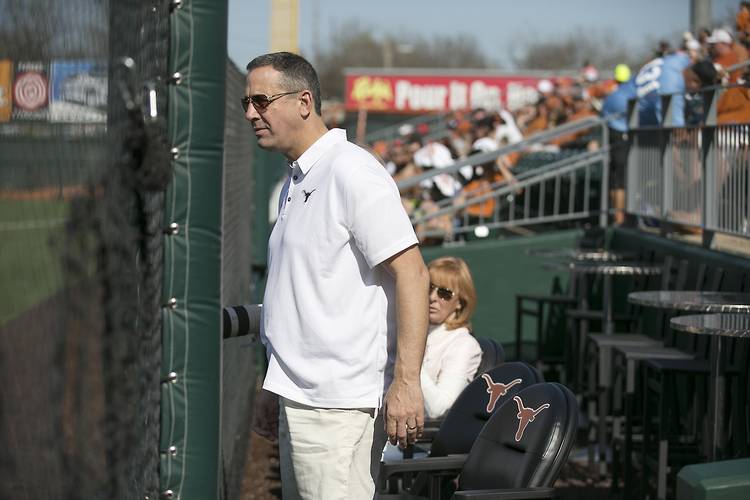 DALLAS — Wolfgang Puck’s catering is delectable, as more than 250 members of the Texas Exes booster group discovered Tuesday. Between the fish tacos, mini chicken flautas and green chile chicken enchiladas, those who went home hungry have only themselves to blame.

Noshing on Tex-Mex is one thing. But Del Conte gave the Union Station audience plenty of food for thought about the future of UT athletics during the third stop on the This is Texas Tour.

In his most expansive comments to date, Del Conte outlined what sounded like a totally new game-day experience at Royal-Memorial Stadium and how the Horns need a 10,000-seat basketball arena to replace the Erwin Center.

And from the sound of it, those in-game weather reports may be gone — just like Jet Pack Guy. Same holds true for some of those overbearing advertisements Texas fans have complained about for years.

“In-game, we went from a script of 26 pages — third down provided by Jiffy Lube! — and then the next thing — first down provided by Flat Tire!… well, we don’t need all that,” Del Conte said. “We don’t need to know what the weather is every time. The weatherman tells us it’s hot. Hell, we know it’s hot. So the idea is we’re going to control our in-game scripts and try to make it about the band.”

After that last line, the crowd broke out in spontaneous applause. Oh, but Del Conte was merely getting warmed up. Sure, fans wanted to hear from the coaches. Women’s soccer coach Angela Kelly, volleyball coach Jerritt Elliott, basketball coaches Karen Aston and Shaka Smart and football coach Tom Herman were part of the show. But Del Conte stole it.

“We’re going to take (San Jacinto Blvd.) and we’re going to move the cars off San Jac and put them up on 21st Street and make that a carnival experience, a celebration of Texas,” he said, which stunned the crowd. “We have six or seven home football games. We bring 100,000 people to Austin to celebrate the University of Texas. That’s what a game is. It’s the front porch to celebrate our great university.”

Del Conte said he wants to turn the parking lot adjacent to the LBJ Library into a place for concerts.

“What are we known for in Austin? Food trucks? Foodies? Beer and wine and have a nice little concert?,” Del Conte said. “So we’re going to create all these activities around the game that draws students from west campus and draws fans to come back and say this is the University of Texas.”

Del Conte is taking all the feedback obtained through a fan survey serious.

“We found out that we have 28,000 people trying to get into gate 1,” Del Conte said. “And outside San Jac, there’s gate 2, gate 3, but it’s like wildebeests who just go to gate 1. Hel-l-o? Tom’s going, ‘Why are they not getting to the game on time?’ Well, they’re all going to gate 1 and they’re still there at halftime trying to get in.

“Inside the stadium, we really need to look at our concessions and our prices,” he added. “How much have we out-priced the family?”

And yes, Del Conte said the athletic department will address the music played inside the stadium.

“There might be some musical choices that you’ll go, ‘Boy, that’s not exactly what I want,’” he said. “I understand that. But we also have 18- to 22-year-old kids that listen to different music than I listened to. I listened to the Mamas & the Papas. My daughter likes Migos, which I thought was a breakfast meal, and Taylor Swift. So we all have to compromise.”

The school wants to spend $140 million on a project that will totally reimagine the appearance of the south end zone. That likely includes an overhaul of the UT football building.

His comments about wanting a 10,000-seat basketball arena will draw scrutiny from all quarters. On the surface, it sounds small. But school officials are grappling with a tough decision which is best — a small arena that looks and feels packed every game or a larger arena that might not sell out that often?

Del Conte envisions something along the likes of the American Airlines Center or Staples Center, or “mini versions,” he said.

Del Conte’s comments echo exactly what Herman wanted the tour to be. “Honesty,” Herman said. For Del Conte, Herman and the rest of the Texas athletic department, they want fans to get excited about the Longhorns again.

The football program snapped a three-year losing streak and is trending up. Both basketball programs made the NCAA Tournament. The baseball team is in the Big 12 title hunt. Volleyball, tennis, golf and swimming are all still running at elite levels.

“I don’t think there’s one program at the University of Texas where anybody that’s rational can say that program isn’t headed in the right direction,” Herman said.

It’s unclear what kind of reception this traveling circus will get on future tour stops. In the same building in 2014, it was standing-room only to see then-coach Charlie Strong. On Tuesday, the room was full, but it lacked the same energy.

The show has a script, but it’s better to just let Del Conte riff. “I don’t even know what the script is,” he said.

Chuck Harris, executive director of the Texas Exes, said his group, athletic department and admissions officials are presenting this tour in unified fashion. “It’s a Longhorn event,” Harris said. “We don’t do stuff that’s not fantastically great and over the top.”

Maybe Del Conte is over the top, but then again, perhaps that’s exactly what Texas needs. Apple sells millions of iPhones, and yet the company still advertises. The Longhorns haven’t done much of that in recent years. Del Conte and Herman both talk about the need to “reinvigorate our brand.”

Next stop: Fort Worth. This show hits Corpus Christi, San Antonio and Houston in the coming days and more cities later this month.

“I challenge each and every one of you, every Friday to wear burnt orange,” Del Conte said. “Put a flag in front of your house that says you’re a proud alum. The last 10 years, we’ve taken our lumps, but that ends today. It ends with you all.”