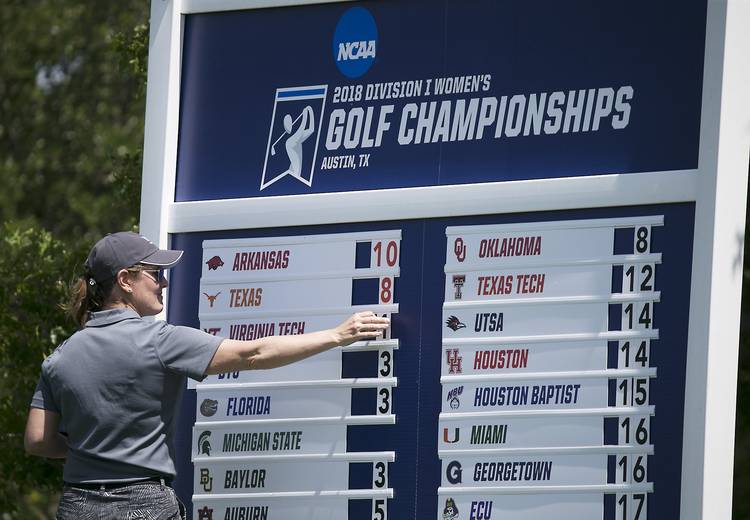 Alana Uriell regards herself as a visual person. So don’t tell her that switching from a silver putter to a black one didn’t make a difference.

Uriell, an Arkansas senior playing her second competitive round with the new putter, shot a 7-under par 65 on Tuesday, helping the top-seeded Razorbacks take a commanding lead after two rounds of the 54-hole NCAA Austin Regional at the University of Texas Golf Club.

Uriell shot a 78 on Monday.

“I was really bummed out,” Uriell said.

A day later she made eight birdies, including a downhill 11-footer on the final hole. She holed a 25-footer on No. 13.

Uriell said she switched putters — both are Evnroll ER2 models — after missing too many short ones during the SEC tournament in April.

“I needed a new visual,” Uriell said. “They said ‘we can make you a new putter.’ That was really all I needed.”

Six schools will advance after the final round on Wednesday to the NCAA championship May 18-23 at Karsten Creek Golf Club in Stillwater, Okla. Three individuals from schools that do not advance will qualify as well. Florida is in third place at 2-over. Baylor, Texas A&M, Oklahoma and Virginia Tech are tied for fourth at 5-over.

Texas shot a respectable 3-under on Tuesday, the third-best score of the day.

Texas A&M senior Maddie Szeryk shot 69 and leads the field at 7-under. The three closest in pursuit are from Arkansas — Dylan Kim (68) trails by one shot, Maria Fassi (70) is two off the lead and Kaylee Benton (68) is three strokes back.

Sophomore Emilee Hoffman is the top Longhorn at 3-under, tied for fifth place after shooting a 69. Senior Sophia Schubert (73) and sophomore Greta Isabella Voelker (72) are 2-under, tied for eighth.

Szeryk shot 69 on Tuesday after an opening-round 68 gave her a one-stroke lead. She made four birdies on the front nine, mostly with short putts, and then spent the rest of her round scrambling for pars, something she does very well.

On No. 18 she hit her second shot short of the green but made a nice chip, leaving herself a short putt for par.

“She just figures out a way to get it in the hole,” Aggies coach Trelle McCombs said. “It would not have surprised me if she would have chipped it in on the last hole.”

Szeryk hit her tee shot into a fairway bunker at No. 13. Her second shot caught the lip and emerged sideways on to the fairway.

“I thought I could clear it, and just barely hit it,” Szeryk said.

Szeryk hit her third shot on to the green and made a 12-footer for par. After her difficult escape from the bunker, Szeryk smacked a club against her golf bag, the type of display she is working to avoid, or at least mitigate.

“Being angry is not going to change anything,” Szeryk said. “You hit the shot and go from there and think how am I going to make par or bogey at worst? I’m still learning.”

Her mother, Karen, said that passion is a trait they share.

“She’s worked hard trying to learn to keep it steady,” Karen said. “She used to play soccer. It was great to have all that passion. But it doesn’t work well in golf.”

Four golfers could not compete on Tuesday. Three from East Carolina and one from Miami missed the round with a stomach illness. A fourth player from East Carolina competed while sick. Some coaches in the tournament also became ill.

UT Golf Club general manager Steve Termeer said a cause has not been identified.

“We served over 250 meals Monday,” Termeer said. “So we identified that it had nothing to do with the food we served.”