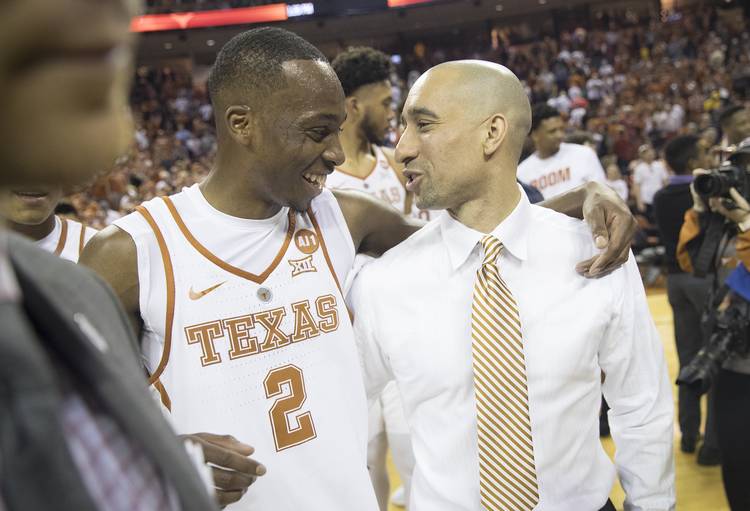 DALLAS — Little do they know it, but Texas football coach Tom Herman and men’s basketball coach Shaka Smart are tracking similar paths. Both are stockpiling talent after recognizing their program’s biggest deficiency.

When Herman arrived, the Longhorns were woefully thin at quarterback. Now, he’ll go into this season with four solid candidates. Likewise, Smart’s second season highlighted a dire need for more point guards. Now heading into his fourth year, Smart has four possible choices highlighted by Matt Coleman, who will be a sophomore.

Coleman, who averaged 4.1 assists per game as a freshman, is the team’s floor leader. Elijah Mitrou-Long, a transfer from Mount St. Mary’s, is now eligible after sitting out last season per NCAA transfer rules. Kerwin Roach II, assuming he returns after testing the NBA waters, could play point guard in a pinch. However, he’s better suited for shooting guard.

“Really excited about him,” Smart said after Tuesday’s “This is Texas” tour stop. “He’s a winner, that’s the biggest thing about him. He won a state championship as a junior in high school and as a senior. He’s a meat-and-potatoes guy from the standpoint he just cares about winning and the game.”

As for his cache of point guards, Smart said, “We’ll be in a lot better spot in terms of ball-handling, decision-making, but Courtney’s got to come in and get acclimated. I think he’s really going to help our team.”

Ramey’s addition most likely completes the 2018 recruiting class, which 247Sports ranks eighth nationally. After having two one-and-done players the last two seasons, it’s possible each of these five players hangs around long enough to become sophomores.

Smart said “I’d be surprised” if anyone on the current roster leaves after their freshmen season. He desperately wants an older roster.

“The last two years, we had two phenomenal freshman bigs,” the coach said. “But the nature of your team when your best player is a freshman big, there are some challenges that go along with that.”

Andrew Jones update: At each tour stop, Smart is likely to give fans an update on guard Andrew Jones, who was diagnosed with leukemia.

Jones is currently not enrolled at UT, thus he cannot work out with the Longhorns in an official capacity. However, he’s showcasing his progress almost every day on social media, and everyone at UT is keeping their fingers crossed.

“We want to say thank you to everyone in the room and all the Texas alums and fans who have supported Andrew from afar,” Smart said. “It’s been very, very heartfelt. It’s been something that he talks about all the time. He is very, very motivated to get back in school and get back on the court. We know with his spirit, he’s going to be able to do that.”

Assistant coaching search: Smart still has a vacancy on his bench now that longtime assistant Mike Morrell has departed to become the head coach at North Carolina-Asheville. Smart was looking to hire Mount St. Mary’s coach Jamion Christian before he took the Sienna job.

As for Morrell, Smart said the new job was a good fit. It’s an upper-level job in the Big South conference and about 45 minutes from Morrell’s hometown.

“A lot of people don’t know about Mike is that he’s very prideful and connected where he’s from,” Smart said. “He’s in a great place, and I think he’ll do really well.”

Hepa with Team USA: Incoming freshman Kamaka Hepa, the Gatorade player of the year in Oregon, was named one of 32 players invited to the Team USA training camp for the under-18 squad. Training camp runs May 31-June 2 in Colorado Springs, Colo.

Hepa averaged 16.5 points, 10.4 rebounds and 6.2 blocks last season as a high school senior. If selected for the U18 squad, Hepa will play in the FIBA Americas championship in Ontario, Canada. Kansas coach Bill Self is the Team USA U18 head coach.