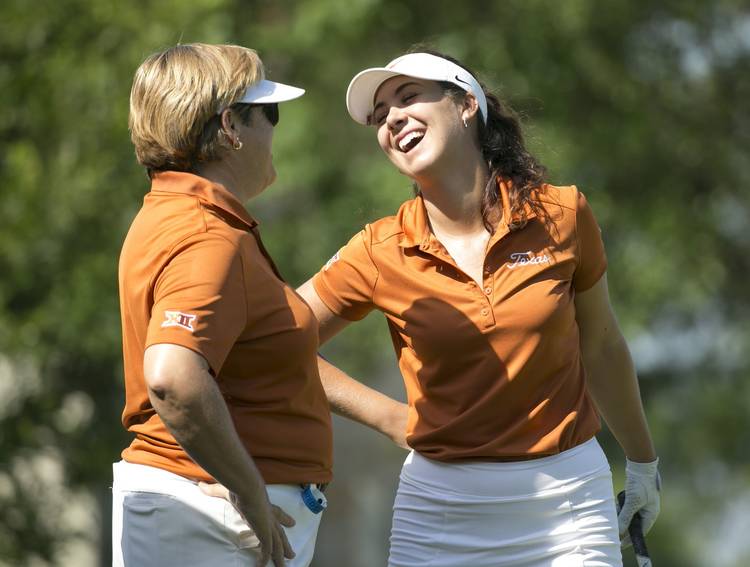 UT associate head coach Kate Golden, left, talks to golfer Sophia Schubert just before she began her round at the NCAA Golf Austin Regional at the University of Texas Golf Club on Wednesday May 9, 2018. JAY JANNER / AMERICAN-STATESMAN

Maria Fassi has a well-earned reputation around women’s collegiate golf for her prodigious distance off the tee.

But Fassi didn’t become the No.2-ranked player in the nation merely because she sometimes outdrives opponents by 40 or 50 yards.

On Wednesday the Arkansas junior displayed plenty of other skills, shooting a 3-under par 69 to overtake Texas A&M’s Maddie Szeryk and win individual medalist of the NCAA Austin Regional at the University of Texas Golf Club.

Fassi finished the 54-hole tournament at 8-under, one shot better than Szeryk. Top-seeded Arkansas, ranked third nationally, won the tournament by shooting 26-under par, thanks largely to an extraordinary minus-17 score on Tuesday. The Razorbacks beat runner-up Texas by 11 strokes.

Fassi won the tournament, her sixth victory this season, by making birdie on four of the final eight holes. She avoided a tie with Szeryk by holing an 8-foot downhill putt on No. 18.

“I was shaking,” said Fassi, out of Hidalgo, Mexico. “But I just thought of all the 8-footers I had made today, this tournament, last week, last month, and I was just committed to my stroke.”

“She’s really putted well,” Arkansas coach Shauna Taylor said. “Making this 8-footer here to win, she’s converted a lot of those this year. She’s been able to manage her length and play disciplined golf, and she’s gotten some putts to drop.”

Four Arkansas players finished among the top 11, including Dylan Kim alone in third place at 5-under. Alana Uriell and Kaylee Benton were in an eight-player tie for fourth place at 4-under that included Longhorns Sophia Schubert and Emilee Hoffman.

Texas matched Arkansas for best score on Wednesday, 5-under 283. The top four scores from the five golfers are included in the total each day.

Perhaps the best news for Texas was that all five Longhorns finished in the top 25. Agathe Laisne tied for 16th and Kaitlyn Papp finished 23rd. Both players are freshmen.

Schubert, a senior, figures that’s a good sign for the Longhorns with the NCAA championship approaching.

“That’s really rare to have every girl place that well,” Schubert said. “It should give everyone confidence. I think it will.”

While Arkansas had four golfers in the top 11, a fifth — Cara Gorlie — finished in a tie for 38th. Then again, Gorlie played with a stomach virus that prevented some players, including three from East Carolina, from competing on Tuesday.

“We Lysol-ed everything,” Fassi said. “We are all just being really careful about where we are eating and hoping we would not get sick.”

Taylor said she does not know what caused the illness.

“We got (Gorlie) some IVs and tried to keep her hydrated,” Taylor said. “And we tried to keep everybody else away and healthy so we could complete the round today.”

A spokesperson for Austin Public Health, Carole Barasch, said 17 people from the tournament, including players, coaches and others, contracted the virus, but no cause has been determined.

“This type of investigation is challenging,” Barasch said. “They apparently ate at different places, complicating everything. They suspect foodborne, and person-to-person transmission. We won’t collect stool samples because (most) reside out of state, outside our jurisdiction.”

Note: Szeryk, Harm and Huang advance to the NCAA championships as individuals along with those already qualifying with their teams.