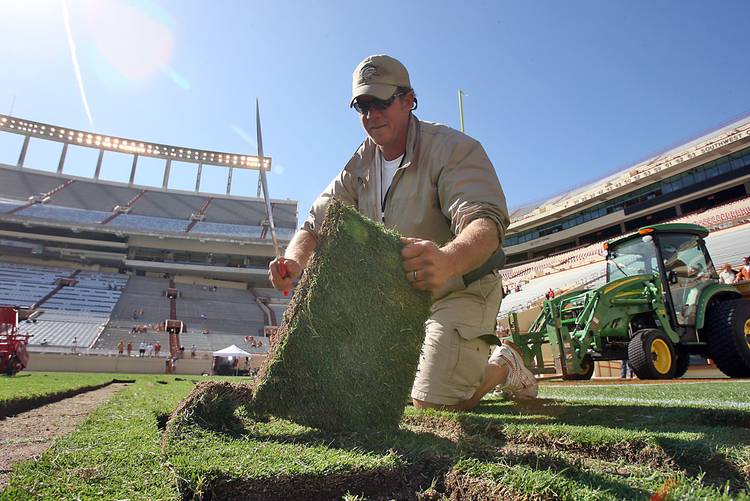 Jeremy King, facility manager for Mike A. Myers Stadium, uses a machete to cut grass squares to be sold to fans as keepsakes and to raise money towards the new artificial turf at Royal-Memorial Stadium in Austin, Texas, on Sunday, April 5, 2009. American-Statesman staff

Recency bias may have convinced Mack Brown in February 2009 that Texas should rip out the Bermuda grass field inside Royal-Memorial Stadium.

Brown saw Texas and Texas A&M players slipping and sliding all over during the 2008 Thanksgiving matchup. “I think we’ll see a lot more people going to artificial turf,” the former UT coach said at the time. FieldTurf was installed before the 2009 season.

“As a staff, 100 percent, we liked grass,” he added. “We wished it could work out. But artificial turf is so much better now than it’s ever been.”

Less than 10 years later, Texas officials may tear out that artificial surface and go back to natural grass at some point. The Longhorns played on grass until 1969, then played on what became an unforgiving, rock-hard artificial surface until 1996, then went back to grass, then to artificial and now may switch back again.

TCU, Oklahoma and Iowa State are now the only teams in the Big 12 who still play on a natural grass surface. Texas A&M has used grass at Kyle Field since 1996.

“I just like the idea of grass,” UT athletic director Chris Del Conte said. “I like the smell of grass when you come out playing, but it’s also really a coach’s preference. I just like a grass field.”

Asked if he wanted grass, coach Tom Herman said, “I waffle a little bit on it. I do.

“I would love grass,” Herman said. “I love grass. I believe that football was meant to be played on grass. In our part of the country, there isn’t a lot of teams with grass.”

“The issue with the grass is now in the winter offseason and the summer conditioning and when the grass is down, where do you go do all your offseason drills?,” Herman said. “If you go out there every day, you’re going to tear up the grass.”

Examining his options, Herman said players could be bused over to the Frank Denius practice fields during the offseason. Not ideal. Or players could work out in the adjacent indoor facility.

“With our practice facility structure,” Herman said, “is it more prudent to keep the turf versus the six Saturdays in the fall.”

The Longhorns almost had a deal in place to install grass — for free, too. The American-Statesman reported Wednesday that Anthony Precourt’s group nearly reached a one-year lease agreement worth $5 million to install grass and bring the Columbus Crew Major League Soccer franchise to Royal-Memorial Stadium.

According to an MLS source, Crew officials now regret not pushing that deal through.

If Herman is already concerned about offseason wear and tear, how would professional soccer matches affect the playing surface? Most college and NFL grass fields show wear and tear by November.

When artificial surfaces were becoming en vogue during the last decade, doctors began studying whether players suffered more injuries on artificial surfaces or grass fields. The results were mixed. As the artificial playing surfaces evolved — where rubber pellets gave the product more bounce — the injury data evened out.

Grass requires constant mowing, water and upkeep. The artificial surface is ready rain, sleet, snow or shine. In 2009, Texas spent about $100,000 annually keeping its grass playing surface in shape. The FieldTurf installed at that time cost $400,000.

Texas officials got savvy with the grass removal, too. Sections were cut into 12-inch-by-12-inch squares and sold for $20 each.

In 2009, the UT coach said, “We have agreed that we will go with whatever the department feels is best.”

Leaving a year of eligibility behind, Texas’ Erica Wright looks to close out her career the right way