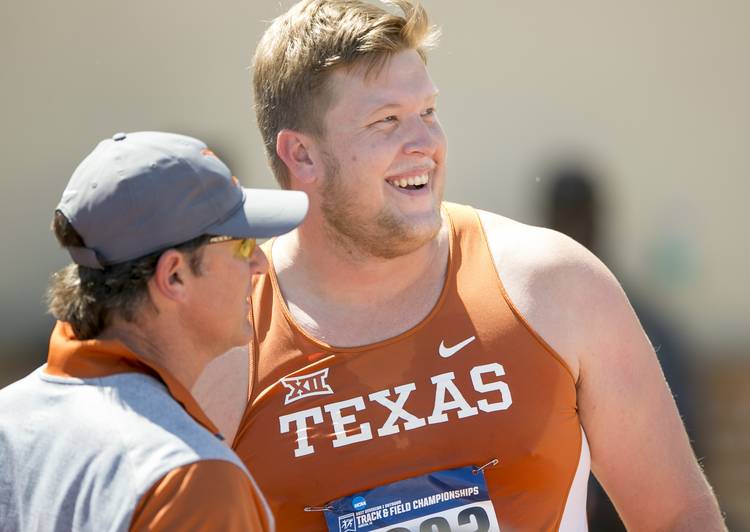 Years ago, Alan Zapalac made his own bed.

While that may seem like a customary chore for a college freshman, Zapalac literally made the bed for his 6-7, 320-pound frame. He’s also constructed all the furniture and picture frames he owns. He caught the building bug from his father, a “jack of all trades” whom the Texas senior grew up watching work on engines, tractors and cars in the tiny Houston-area town of Orchard.

Though he’s a senior, Zapalac will remain at Texas for the next three years as he works on his master’s degree in architecture. One day, he hopes to own a design firm focusing on commercial real estate or athletic facilities. If you’re wondering, Zapalac thinks UT’s Myers Stadium needs “a little TLC” and a new scoreboard before the NCAA outdoor championships it will host in 2019 and 2020.

If only Zapalac knew an athletic director who has not shied away from the topic of making changes at Texas.

“We actually go to church together, so I put a bug in his ear every now and again,” Zapalac said of Chris Del Conte.

Zapalac’s hands will be put to work this week at Waco’s Clyde Hart Track & Field Stadium, the site of the Big 12’s outdoor championship. Zapalac will participate in the discus and hammer throw for a UT men’s team that’s eying its fifth conference title in six years.

Zapalac boasts the Big 12’s fourth-best heave in the hammer. He’s ranked eighth in the conference in the discus. On Wednesday, he rued his recent discus practices but was hopeful that he can still qualify for the South Central regional meet. He is, however, more confident with his abilities in the hammer.

“After (Tuesday’s) practice, I’m ready to let one go. By all means, in my mind, I’ll be at Eugene in a couple more weeks,” said Zapalac, referring to the NCAA outdoor championship.

Zapalac is coming off an indoor season in which he set a school record in the weight throw. That toss of 72 feet, 8 inches earned him All-American accolades and an eighth-place finish at the NCAA indoors. Raised in an Aggie household, Zapalac celebrated his All-American status by getting the traditional tattoo of a Longhorn on his left shoulder.

Texas senior Alan Zapalac fires the cannon at the end of the Texas Relays’ opening ceremony. When he isn’t busy holding the school record in the weight throw, Zapalac is a member of the Texas Cowboys. #HookEm #TexasRelays pic.twitter.com/5Ep6pZomVI

Since his All-American toss came at his first-ever appearance at an NCAA meet, some might call Zapalac a late bloomer. You can also refer to Zapalac as a Texas Cowboy — literally, since he’s been a part of that UT spirit organization since his junior year. Zapalac’s size, blonde hair and the assumption back in Orchard that he throws a sledgehammer has led to the nickname “Thor.”

Texas interim track and field coach Tonja Buford-Bailey, however, described Zapalac as a “father of the team.” He is a team captain and one of seven seniors on the men’s roster. The redshirt year he took in 2014 gives him an extra year on a team loaded with standout freshmen like Sam Worley, Micaiah Harris and Tripp Piperi.

“He’s very no-nonsense, which I like. He’s honest and he leads by example,” Buford-Bailey said. “The great thing about being a leader isn’t so much what you say, it’s what you do. I think that they have really noticed that from him.”

UT’s women claimed a conference crown during the indoor season.  (The men finished second to Texas Tech). Texas expects to contend for more hardware this weekend.

The men have won four of the conference’s past five outdoor championships with the lone slip-up a runner-up finish in 2014. The Texas women had their run of three straight conference outdoor titles thwarted by Kansas State in 2017.

What to look for: