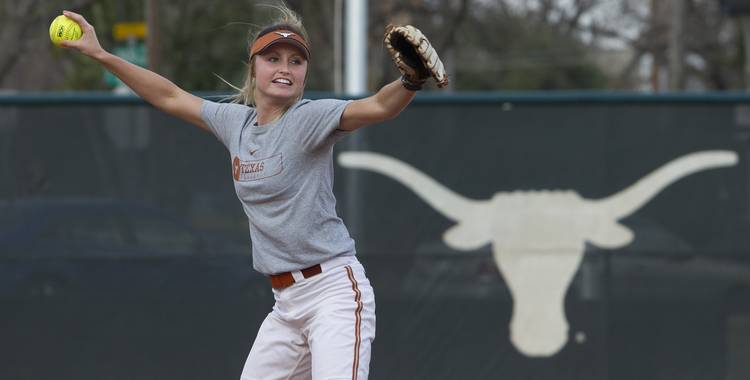 Texas' Erica Wright makes a throw to home during the second day of practice for the 2017 season at McCombs Field Thursday, Jan. 12, 2017. (Stephen Spillman / for AMERICAN-STATESMAN)

Texas pitcher Erica Wright has spent her entire life at one softball field or another.

The next 22 years have featured a lot of softball. Wright played for her mother at Huntington’s junior and high schools. (“I think God knew what he was doing when he gave me two daughters,” said Ruth, who once coached both daughters Ashley and Erica in a 2011 high school state tournament game at McCombs Field). When Erica outgrew the Huntington Heartbreakers select team, lengthy drives to club practices in Houston awaited. Since 2015, she’s pitched 360 1/3 innings at Texas.

Wright, however, has reached the beginning of the end for her softball career.

Wright, a redshirt junior, has elected to give up the sport when this season ends. That means this upcoming postseason will be her last. Eyeing a 14th straight trip to the NCAA tournament, Texas opens play at the Big 12 tournament on Friday as the No. 4 seed.

“I’ve been around softball my whole life, so it’s crazy to think that after this long, it’s going to be over,” Wright said this week. “It’s been crazy. Really, just to think that I’m not going to come to the softball field every day is wild.”

Wright has amassed 31 wins in her career. She also has earned five saves this season, which ties a school record.

During her freshman year, she went 18-9 with 178 strikeouts and a 2.42 ERA. She beat ranked teams from Baylor and Kansas twice and shut out No. 8 Georgia. A 4-3 loss to San Diego State in the NCAA tournament, however, would be her last appearance for 636 days.

Wright had surgery in November of her sophomore year to remove a broken rib, an injury that had bothered her for months. Later on, another broken rib was discovered. She regressed during her rehab as she attempted to return to the field and was eventually shut down for the 2016 season.

Wright returned to lead UT in ERA during the 2017 season. She has a career-high 3.14 ERA this year but has started 13 times and has been a solid relief option for a pitching staff that features all-conference honorees Paige von Sprecken and Brooke Bolinger.

Wright was once told by a doctor he believed she had less than a 50-percent chance of playing again, “so the fact that I’m here is pretty awesome.” It took a while for Wright to regain her strength in the circle, but she feels fine now. Still, the question of “what if” lingers.

“I’m sure that it would have been different. It had to be different,” Wright said. “I’ve been playing my whole life, I’ve never had a week off, much less a year-and-a-half. I’m sure it did take me off the path that I probably was going for. But you know what? Life, it throws you some curveballs.”

That curveball, however, served a purpose. From the sideline, Wright realized an identity apart from the sport. Softball was something she was “blessed” to do, and “going out as a senior, you have to figure out what your identity is.”

That, in part, brings us to the end of Wright’s athletic career. Since she redshirted in 2016, she could have returned to the Longhorns for the 2019 season. But she announced in March that she was going to make this season her last.

An applied movement science major, she will graduate this spring. Wright, who recently received the Big 12’s highest academic honor, wants to study to become a physician’s assistant and that requires real-life experience. Juggling her softball schedule with job shadowing did not seem realistic.

Longhorns head coach Connie Clark told Wright that the team would accommodate her schedule. Clark said she even thought she “had her talked out of it for a little while.” Wright, though, decided to focus on her future. On April 22 she was recognized at UT’s Senior Day alongside von Sprecken, Randel Leahy and Kristen Clark, her self-appointed twin.

“It’s just so awesome to be able to celebrate playing four years with her, and (for) her to actually go out and celebrate the senior things with us,” Clark said.

Texas (30-23) will meet Iowa State and Oklahoma in pool play on Friday. Wright is 2-1 with a save in her career against the Cyclones. She — or any of her teammates, for that matter — has never beaten Oklahoma although the team’s 14th straight loss to the Sooners was an extra-inning defeat on April 29.

After the Big 12 tournament concludes on Saturday, Texas will await its postseason fate. The Longhorns last missed the NCAA tournament in 2004.

“I’m not sad yet, but I know I’m going to miss it a lot,” Wright said. “It’s never going to be the same, really. You’re going to be an adult. You don’t get to just come out here and have fun and forget about all your obligations and responsibilities. I’m going to miss that, but I’m so happy I’m going out with the girls that I am.”

The Dotted Line: Texas still in the race for 2019 defensive end NaNa Osafo-Mensah