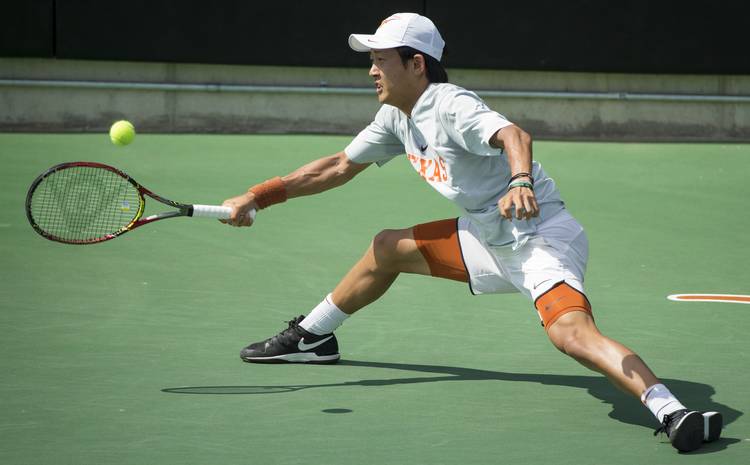 For the rest of time, no matter how many times Texas and Texas A&M have played each other — and will play each other — it will always have added meaning. It doesn’t matter the sport or the venue. They could play in a field, on a track, in a pool or, as was the case Saturday afternoon, on courts at the Texas Tennis Center.

The No. 6 Texas women’s tennis team hosted the No. 30 Aggies as part of the 2018 NCAA men’s and women’s championships, and the No. 11 men’s team hosted California. For the women, it was their first time playing Texas A&M in four years; in 2014, the Aggies hosted the first two rounds of the NCAAs and beat Texas in the second round.

In the funny world of sports, current UT women’s coach Howard Joffe was the Aggies’ coach at that time. He had a chance to beat his former team as the Longhorns, who lost in the NCAA’s first round last year, looked to advance to their first Sweet 16 appearance since 2016, Joffe’s first season as Texas coach.

After a little less than two hours, Joffe’s team had accomplished the feat, claiming a 4-0 victory over the Aggies.

Texas earned the doubles point and then took three straight-set singles contests to win their 18th match in a row, going back to Feb. 16 against South Florida.

“I am very proud and happy for our young group, and I’m relieved. I’m relieved in the sense that, as the No. 5 team in the country, we had a lot to play for, but we also had a lot to lose,” Joffe said. “So in that it was a touchy matchup and a big rivalry that our team rose to the occasion makes an old coach very relieved.”

Texas earned its doubles point thanks to the duo of freshman Marta Perez-Mur and senior Dani Wagland, who beat the Aggies’ Tatiana Makarova and Macarena Olivares 6-3. Then, with Perez-Mur and Wagland watching, UT sophomore Petra Granic and freshman Bojana Markovic knocked off Eva Paalma and Domenica Gonzalez 6-3 to secure the doubles point and a 1-0 lead.

“Petra’s game style, win or lose, it’s very efficient,” Joffe said. “She got down a little bit but raced out a comfortable winner.”

“We made it two years ago, in my sophomore year, which was a bit of a miracle that we made it,” Wagland said. “So, this time, we’re here to do business and go a lot further in the tournament and see where it takes us.”

A couple of hours later, the men also advanced, beating No. 34 California 4-0. UT earned its fifth straight Sweet 16 appearance and is looking to better last year’s run when the Longhorns lost to eventual national champion Virginia in the quarterfinals.

“Our guys were great today. I thought at certain spots we didn’t play our best, but the conditions were tough,” UT coach Michael Center said.

All-America sophomore Yuya Ito and junior Colin Markes posted a 6-2 win over Dominic Barretto and Can Kaya in the third doubles. Then they turned their focus to first doubles, where the Horns’ 39th-ranked duo of junior Harrison Scott and sophomore Christian Sigsgaard faced off against the 33rd-ranked duo of Billy Griffith and J.T. Nishimura.

Scott and Sigsgaard pulled off the upset to give Texas the doubles point. Then in the singles matches, junior Rodrigo Banzer defeated Paul Barretto 6-4, 6-0 and Scott defeated Jack Molloy 6-2, 6-4. With Texas needing one point to advance, Markes, who went to Westwood High School, defeated Jacob Brumm 6-1, 1-6, 6-1.

The Dotted Line: Texas still in the race for 2019 defensive end NaNa Osafo-Mensah