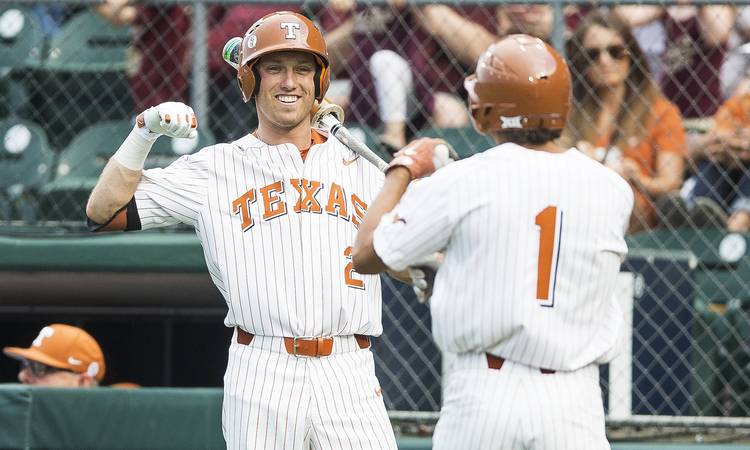 Following eight days of inactivity — and a two-hour weather delay — Texas returned to the win column with a 6-2 beating of Texas State on Tuesday.

The non-conference game at UFCU Disch-Falk Field featured a potpourri of headlines. Shortstop David Hamilton continued to terrorize his hometown team. Junior Matteo Bocchi pitched well in from of his parents, who were visiting from Italy. Kody Clemens even reached base twice on his 22nd birthday.

For a team that entered the regular season’s final week with hopes of hosting a regional, though, the biggest story was the win itself.

“I just thought we did an outstanding job of taking care of business tonight,” said UT coach David Pierce, whose team last played on May 6.

RELATED: PHOTOS: Longhorns baseball — Texas vs. Texas State on May 15

The Tuesday tussle featured a lengthy delay that was triggered by lightning. Texas held a 5-1 lead when the two-hour break was called with one out in the fourth inning’s bottom half.

Texas State scored the game’s first run, but Hamilton hit a homer in UT’s first at-bat. Hamilton later added a RBI single during a three-run second inning. He finished the game with a career-high four hits.

A San Marcos native, Hamilton is now 11-for-19 with six runs, nine RBIs and six walks in six games against Texas State. Three of his five career homers have come at the expense of Texas State pitching. In an 11-10 win two weeks ago, Hamilton walked off with a ninth-inning grand slam.

UT’s Hamilton-led offense supported a pitching staff of four on Tuesday. Freshman Bryce Elder earned his sixth win of the season, in part because he was at the right place at the right time. Bocchi started for the Longhorns, but his night ended during the weather delay.

Texas State tagged Bocchi for three hits in the first inning. The junior right-hander, however, retired 10 straight batters after the Bobcats took their 1-0 lead. Bocchi allowed five hits and no walks over his four innings, and he struck out five batters.

For Texas this season, Bocchi’s outing was only the third midweek start that lasted at least four innings.

“I just saw him have good tempo and attack the strike zone,” said Pierce, who would have sent Bocchi out for a fifth inning had the weather cooperated. “He wasn’t perfect, he left some balls up, but he threw a lot of quality pitches today.”

Among the announced crowd of 5,043 — a number that significantly dwindled after the delay — were Bocchi’s parents. Bocchi’s parents had not seen him pitch in the United States. Bocchi said they had considered visiting him over the past two seasons at Odessa College, but “I was, like, if you really want to really to come, come next year at Texas because it’s a much better place.”

“When you’re in the game, locked in, I don’t really pay attention to the stands,” Bocchi said. “But I was happy they were here.”

Ranked 17th in the D1Baseball poll, Texas will close out its regular season with a three-game homestand against TCU that begins on Thursday. With a 14-7 mark in Big 12 play, Texas trails first-place Oklahoma State by two games. The No. 24 Cowboys will host No. 15 Texas Tech this weekend.

Around the bases: A switch-hitter in 2017, Texas third baseman Ryan Reynolds swung from the left side of the plate for the first time this season. As a left-handed hitter against Texas State, Reynolds went 2-for-2 and was hit by a pitch. … Chase Shugart, who will start for Texas on Friday, threw 11 pitches over a perfect eighth inning. … Ranked 12th nationally in double plays, Texas State (25-26-1) turned two twice. With 53, the Bobcats now trail second-place Texas by six double plays. … Georgetown native Braden Pearson threw 1 2/3 innings of one-hit relief for the Bobcats.

The Dotted Line: Zachary Evans headlines Next 25 for 2020 recruiting class