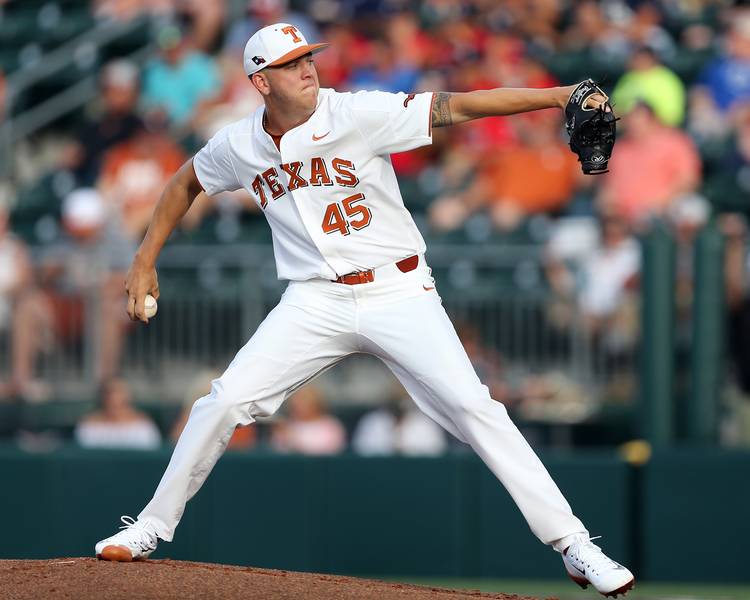 Texas pitcher Nolan Kingham started against TCU at Disch-Falk Field on May 17, 2018. JAMIE HARMS / FOR AMERICAN-STATESMAN

Before he took the mound on Thursday night, Nolan Kingham got a haircut, dusted off his old cleats and asked for the warm-up song he used while earning all-Big 12 honors in 2017.

The moves gave Kingham enough confidence to proclaim to his teammates that his old self was back. Hours later, he would tell UT coach David Pierce the same thing. That second claim, tough, was backed by statistics instead of superstitions.

PHOTOS: Longhorns baseball — Texas vs. TCU on May 17

Kingham went the distance as Texas held off TCU in a 3-2 win at UFCU Disch-Falk Field. With the one-run triumph, Texas pulled within one game of a first-place Oklahoma State team that dropped a 9-4 decision to Texas Tech on Thursday night.

“We knew we had to take the first one away from them. It may be the most important game of this series,” Texas outfielder Masen Hibbeler said. “It was huge for us.”

Kingham got through six scoreless innings on Thursday before A.J. Balta led off the seventh inning with a home run into the Texas bullpen. After a strikeout, Texas centerfielder Austin Todd appeared to make a diving catch for the second out.

Umpires overturned the catch, however, as the glove separated from Todd, who injured his shoulder on the play. Johnny Rizer was awarded a double — despite not touching second base on the initial play — and he later stole third base and scored on a two-out single.

Kingham, though, kept things from spiraling out of control. He retired the next four batters to get through the eighth inning. After Pierce told him he was being pulled for closer Andy McGuire, Kingham asked to stay in the game and the coach obliged.

“I wasn’t going to let that take over,” Kingham said of bouncing back in the seventh inning. “I went out there and I kept doing me and attacking the zone and letting my defense work.”

Kingham allowed six hits over his 116-pitch outing. It was the best the junior right-hander had been since a season-opening performance against Louisiana-Lafayette in which he three-hit the Ragin’ Cajuns over eight innings. He was also the Big 12’s Pitcher of the Week after he beat Oklahoma State and saved a game against Sam Houston State during a five-day span in March.

Kingham, however, had also given up at least four earned runs in five of his games. He was pulled after two-inning appearances in back-to-back starts against Kansas State and Baylor. He entered Thursday’s game with a career-high 4.50 ERA.

He exited the evening with a 7-2 record.

“I thought he was unbelievable the way he attacked,” Pierce said. “He had that bit in his mouth. He wanted the ball tonight and he was making quality, quality pitches.”

Additionally, Kingham was backed by a solid defensive performance. Texas turned its 60th double play of the season to escape a third-inning jam, and junior Kody Clemens made a couple of highlights at second base. Tate Shaw, who replaced Todd in center field, ran down a fly ball on the game’s final play.

Kingham even got in the action when he picked off a runner at second base to end the fourth inning. The play — which happened with Kingham gripping a slider that he threw to shortstop David Hamilton — stranded a TCU runner at third base.

“(The defense is) a highlight reel every time something’s going on,” Kingham said.

On Thursday, Texas never trailed and led by as many as three runs. Texas was led offensively by Hibbeler, who hit a homer and drove in a run with a sacrifice fly. The Longhorns scored first on Jake McKenzie’s second-inning groundout.

Around the bases: Pierce said Todd separated his shoulder and will not be available on Friday. The sophomore outfielder returned to the starting line-up on Thursday after being slowed by a nagging thumb injury throughout this year. … Texas will start Chase Shugart (4-3; 5.09 ERA) against fellow right-hander Jake Eissler (5-1; 3.60) on Friday. … An announced crowd of 5,515 saw Thursday’s game. … UT third baseman Ryan Reynolds was hit by his 15th pitch of the season, which ties him for eighth in the school’s record books.