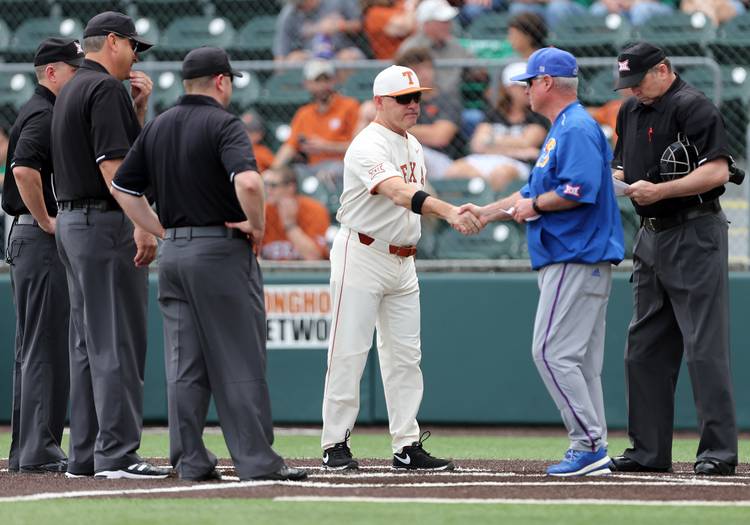 OKLAHOMA CITY — Texas, trailing in the bottom of the ninth inning Wednesday in its Big 12 tournament opener, had the game-tying run at third base with two outs.

The Longhorns had positioned themselves for their 18th comeback of the season, a last-bat setup similar to regular-season games against TCU, Texas State and Louisiana-Lafayette. Texas won each of those games in walk-off fashion.

This story, though, had a different ending.

A groundout thwarted the Longhorns’ rally in a 3-2 loss to eighth-seeded Kansas at Chickasaw Bricktown Ballpark. The loss puts Texas — the No. 1 seed after winning the Big 12’s regular-season title — in danger of an early exit. The Longhorns (37-19) will face Oklahoma (34-22) in an elimination game Thursday morning. The Sooners were shut out by Baylor 4-0 in Wednesday’s early game.

“We’ve faced adversity all year, and I thought we’ve faced it pretty well all year,” UT designated hitter Zach Zubia said. “We’re going to come out tomorrow, forget about this game, come out at 9 a.m. tomorrow against Oklahoma and hopefully we put on a good show.”

The Longhorns, who were down 3-1 with two outs in the ninth, pulled to within one run when Ryan Reynolds singled home Duke Ellis. Pinch-runner Kamron Fields scooted to third base on the play. That brought up DJ Petrinsky, who had produced an RBI single for Texas’ first run in the fifth.

Petrinsky, however, was unable to replicate that hit; he grounded into a fielder’s choice to end the game.

Texas kept its regular weekend starting pitchers on their schedule, instead starting junior Matteo Bocchi on Wednesday. Texas coach David Pierce said he liked what he saw from Bocchi against Texas State last week; Bocchi gave up five hits, one run and no walks in four innings against the Bobcats before leaving after a lengthy weather delay.

But Wednesday, half of Bocchi’s 70 pitches were balls. Two of his four walks were surrendered during a two-run fourth inning. Bocchi’s third start of the season lasted 3 1/3 innings, and the right-hander yielded two hits.

“I think going into today I trusted his stuff,” Pierce said. “What I needed to see is more strikes. That was the key for him and that’s why he had an early exit.”

Bocchi was tagged with the loss, even though the game-deciding run was scored in the eighth inning. Facing UT reliever Josh Sawyer, Kansas’ Devin Foyle hit his 10th home run of the season. Jayhawks coach Ritch Price said Foyle “took offense to the all-league balloting,” referencing an all-Big 12 team that did not include the outfielder.

“I wanted to prove them wrong and come out and show up and just show what I can do,” Foyle said.

Texas was held to four hits, which matched its second-lowest output of the season. Kansas (27-28) started Jackson Goddard, a right-hander who was injured during UT’s regular-season sweep of the Jayhawks. He struck out seven in 6 2/3 innings. Texas mustered only two hits against him.

Around the bases: Pierce said Nolan Kingham (7-2, 4.21 ERA) will start against Oklahoma. He got the win over the Sooners on April 14, allowing three hits and no runs in five innings of work in Texas’ 5-3 victory in Norman. … Freshman Matthew Whelan held Kansas to a hit over three innings of relief. … Ellis extended his hitting streak to 16 games with a ninth-inning single. … This marked the second straight year that the tournament’s eight seed upset the top-seeded team in the first round; last year, top-seeded Texas Tech was shut out by Oklahoma State 3-0. The eighth-seeded Cowboys ended up beating Texas in the championship game.

Editor’s note: An earlier version of this story had Texas’ record at 37-20.