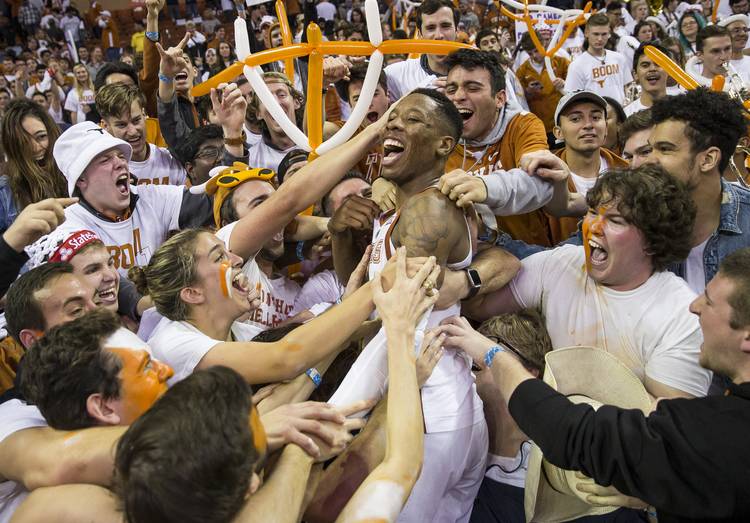 Shaka Smart fully recognizes that every player he recruits to Texas wants to play in the NBA. Tomorrow, preferably. The Longhorns men’s basketball coach believes it’s his job to gather the data and present it in objective fashion.

With Mo Bamba, the decision was easy. Anyone projected as a top-five lottery pick has to leave school. But what about players like Kerwin Roach II, a junior with incredible leaping ability and career scoring average of 9.9 points per game?

“You don’t ever want to be adversarial in any way and try to dampen someone’s dreams,” Smart said Thursday.

“Instead of it being our opinion, which may or might not matter at that point, hopefully we can help the young man have an understanding of the only opinions that matter,” the coach added. “And that’s the opinions of the 30 NBA teams that have draft picks.”

After surveying his options, Roach made the decision to pull his name from the June 21 draft and return to the Longhorns, the university announced. By returning for his senior season, the player known as “Snoop” instantly becomes the most experienced name on the 2018-19 roster.

“I’m hungry for the opportunity to make a career in the NBA, but I realize I have to improve in so many areas on the court,” Roach said in a statement. “I’m really excited to get back to work with my returning teammates and a great group of freshmen.”

After watching Jarrett Allen and Bamba both spend one year at UT and leave, Smart is probably relieved to have an experienced senior at his disposal. Think experience doesn’t matter? Roach had a career-high 26 points in the NCAA Tournament loss to Nevada last season. He can play any guard position and remains one of UT’s best defenders.

There’s another reason to stay, too.

“I’m really appreciative that it’s a guy who has huge basketball goals and dreams, but he’s also within reach of getting this powerful degree,” Smart said. “I’m really excited about that.”

Roach will have a front-loaded fall semester academically and then be able to take a lighter load next spring and still graduate within four years. Frankly, if it were simply up to college basketball coaches, it’s probably how they’d draw it up for most players.

“I’m also on pace to earn my degree, and that is a big deal for me and my family,” Roach said in the statement.

Smart said growth — both personal and athletic — is one of his core values. “My emphasis with Snoop over the next 11 months or so while he’s an immediate part of our program, I just want to see him grow and develop as much as he can,” Smart said. “I think he recognizes there’s more progress to be made.”

Berry hire official: The American-Statesman reported Monday that Smart was close to hiring Iowa State assistant Neill Berry. The school made it official on Thursday.

“He’s been able to get in the trenches with a player and really roll up his sleeves and help the guy improve,” Smart said.

Berry worked for current UT assistant Darrin Horn at South Carolina from 2009-12. He’s been on the Iowa State staff the last four years and was elevated to assistant coach in May 2016.

Berry is credited with the recruitment of Iowa State guard Lindell Wigginton, who averaged 16.7 points as a freshman last season.

“It was going to take a special opportunity to leave Iowa State, and I believe Texas is this opportunity,” Berry said in a statement. “It is an amazing university in a great location with tremendous tradition and support. My family and I are very excited to get to Austin.”

Smart took his time in filling the vacancy created by the departure of Mike Morrell on April 11 to become the head coach at North Carolina-Asheville. By hiring Berry, Smart has essentially robbed Iowa State’s Steve Prohm of one of his talented up-and-comers.

“He’s got a great humility to him, but he’s also very sure of himself in terms of what he does,” Smart said. “I talked to some guys who have played for him in the past, and it was very powerful what they said. We were looking for a great all-around addition to the staff.”

Texas-Georgia meet again: The Big 12 released the lineup for this season’s Big 12/SEC Challenge, and if it looks similar, it is. Texas will once again play at Georgia on Jan. 26 as part of full slate of cross-conference matchups.

The Bulldogs hold a 7-5 lead in the all-time series. The two teams last met on Jan. 28, 2017 as part of the Big 12/SEC Challenge. Georgia captured a 59-57 win. Allen had a chance help the Horns late win with a mid-range hook shot. The ball got halfway home and then ricocheted out as the Bulldogs escaped.

The coaches have no impact on the scheduling, Smart said. Most of the matchups are determined by TV officials and the league offices. Texas hosted Ole Miss last season in Austin.

“The thing about the SEC, this past year and this next year, there’s so many really good teams,” Smart said, “we knew we’d get a big-time team and we’d be on the road.”

The Dotted Line: Scouting Nos. 5-1 on the Next 25, including the best running back in Texas