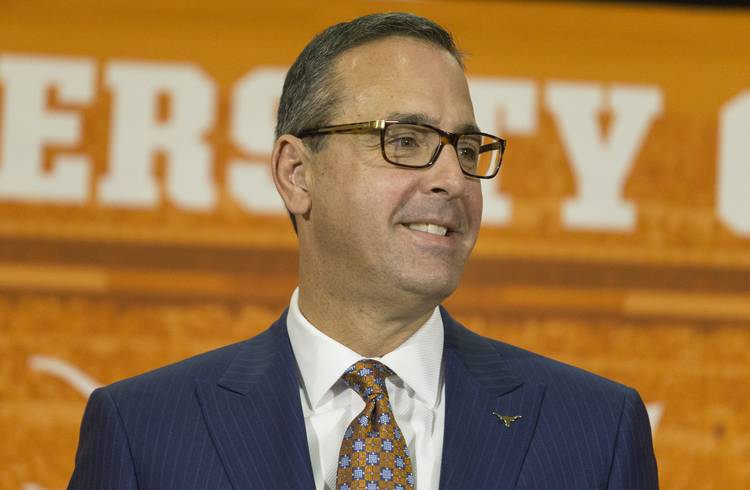 Martin will oversee external matters like marketing, the school’s relationship with Longhorn Network and IMG, media relations and what Del Conte said was “anything that is game-day environment.” Eichorst will handle internal matters, which includes overseeing the business office, human resources and things involving UT policy and procedure, Del Conte said.

The two new hires complete Del Conte’s executive-level cabinet, a six-member group that will meet every week, he said.

“No one’s going to make a decision in a vacuum,” Del Conte said in a phone interview from Eugene, Ore. He flew there for the NCAA track championships after the staff meeting. “I report to (university president Gregory L.) Fenves, but I work for everybody.”

Longhorn Nation, join us in welcoming Drew Martin and Shawn Eichorst to the Forty Acres!

Martin was an associate athletic director for marketing and licensing with the Horned Frogs and had been at the school since April 2012. With Del Conte and Martin together at TCU, they helped the school transform its basketball arena and lift the entire athletic program.

Martin was a driving force behind the school’s “Frog Alley” fan area outside Amon G. Carter Stadium. “The gameday experience will not be the same at DKR,” one well-connected TCU source said. “He’ll jump it ahead 20 years.”

Del Conte said he wanted to work with someone “who knows what I want.”

“I know what we did at TCU,” Del Conte said about improving the game-day experience. “Can we do that at a grander scale at Texas?”

In a statement, Martin said, “My vision for the external operations portion of that aligns very well with his, so that truly makes it exciting to be joining the Texas staff.”

Martin’s role of overseeing marketing, licensing and branding is exactly what longtime UT administrator Chris Plonsky has done for years. Del Conte said Plonsky will now be his “chief of staff” and oversee all student services, like academic services and nutrition, things the AD called “the heart and soul of our athletic program.”

Plonsky, who has been at UT for almost three decades, was the women’s athletic director. But Del Conte was hired last December to oversee both men’s and women’s sports. He has the final say in all decisions regarding all 20 varsity sports at UT.

Reached for comment, Plonsky deferred all questions to Del Conte. “At the end of the day, we’re merging into one department,” Del Conte said. “You try to create roles that fit all of our skill sets. I wanted someone solely focused on student services.”

As for internal services, Del Conte wanted someone who was a previous athletic director. The person in this role typically works directly with coaches. That’s similar to Arthur Johnson’s current role.

Johnson, a senior executive associate athletic director, has been in an administrative role at UT since 2011. Del Conte said Johnson will continue in his current role, overseeing facilities, game-day operations and game management. “Nothing changes with Arthur,” Del Conte said.

Amy Folan will continue in her role overseeing development and working with the Longhorn Foundation.

Eichorst was fired by Nebraska in September, but the school said the decision was tied to on-field football results. He joined Nebraska in October 2012 and was owed the remainder of his contract of $1.7 million through June 2019.

Del Conte met personally with UT staffers who were laid off on Monday. The American-Statesman reported that at least 13 were let go, although several sources said the number was slightly higher. The athletic department is on a hiring freeze, and several open jobs will not be filled.

Del Conte said the department’s overhead shrunk by more than 40 positions, many of which will not be filled. “We need to become more efficient,” Del Conte said.