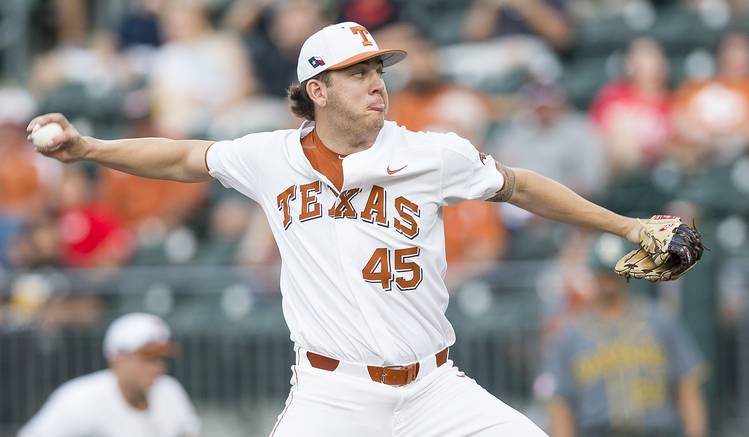 Truth be told, Nolan Kingham never wanted to wear No. 45 at Texas.

He really wanted 22, which was unavailable his freshman year and is still taken — that’s now coach David Pierce’s number. He would have liked No. 34, too. No. 17 would have been nice. But 45 “wasn’t even, like, my top six picks.”

But UT fans have gotten used to the sight of No. 45 on the mound. Kingham, Texas’ 6-3 right-handed pitcher, has made 54 appearances over his three years with the Longhorns. He has an all-time record of 20-10.

He’ll get the start Saturday when Texas (40-20) opens its best-of-three super regional series against Tennessee Tech (52-10) at UFCU Disch-Falk Field. Kingham was drafted in the 12th round of this year’s MLB draft on Wednesday by the Atlanta Braves. Likely opposing him will be Tennessee Tech’s Travis Moths, who was taken by Arizona in the seventh round.

“He has no fear when it comes to that moment,” Pierce said. “He loves it and he thrives on it.”

After winning 10 times in 2017, Kingham entered this year as a preseason All-American. He opened the season with a 10-strikeout performance against Louisiana-Lafayette.

That, however, was the beginning of a roller-coaster season.

He twice was named the Big 12’s pitcher of the week but was left off the all-conference team. He failed to last more than two innings against Kansas State and Baylor but went at least eight innings in four of his 14 starts. He was scratched from a start against Oklahoma for violating one of the team’s academic attendance rules. But a day later he was masterful in a four-inning relief appearance against the Sooners.

Kingham admitted that he was in his own head during his in-season swoons. At times, he estimated, he was making 15 mistakes a game. Pierce, though, has defended him, saying all players go through a period of self-doubt.

Kingham found ways to re-establish and maintain his confidence. Paying attention to details and focusing on singular pitches helped. As did advice and analysis from his older brother Nick, who pitches for the Pittsburgh Pirates. A cosmetic change also never hurts, so Kingham switched his warmup song and cut his hair before his May 17 start against TCU.

Against the Horned Frogs, Kingham pitched a complete game as Texas chased down Oklahoma State for the Big 12 regular season title. He was then solid against Oklahoma in the conference tournament. And bedridden with a viral infection in the lead-up to the Texas A&M showdown, Kingham struck out eight and gave up two earned runs over 7 2/3 innings.

“Nolan Kingham was outstanding on the mound and did a wonderful job,” Texas A&M coach Rob Childress said afterward. “We had no answer from an offensive standpoint against Kingham.”

Kingham has played baseball since he got permission to join a T-ball league for five-year-olds when he was four. Five years younger than his brother, Kingham tagged along at Nick’s practices. His father, Don, noted that “Nolan got to learn indirectly at a young age.”

In addition to playing the sport, Kingham also follows it. He’s often tracking his brother’s rookie season with the Pirates. On April 29, UT allowed him to skip a Longhorns game that he wasn’t playing in at West Virginia so that he could attend his brother’s MLB debut game in Pittsburgh.

Kingham, though, has “got a good balance in his life,” said his girlfriend Malory Schattle, who starts on UT’s softball team. Kingham lists movies, video games and eating among his off-field interests. Need a Longhorn for your pick-up basketball game? If you aren’t picking sophomore pitcher Bryce Verplank, who was an all-district basketball player at Flower Mound Marcus, then Kingham insists he’s your guy.

He describes himself as goofy and outgoing. For confirmation, fans need to look no further than Kingham’s animated interview with the Longhorn Network during the fifth inning of a 5-3 win over TCU on May 18. His father recalled having a hitting coach once tell him that Kingham “had the personality of a left-handed pitcher.”

“He’s totally different off the field,” Schattle said. “He’s really focused and aggressive when he’s playing, but behind the scenes he’s probably one of the goofiest guys I’ve (known).”

On Wednesday, Kingham became the first Longhorn to be drafted by Atlanta since 1990. He has until July 6 to decide whether to sign with the Braves or return to Texas for his senior year. Earlier this week, however, he conceded this is likely his last year as a Longhorn.

For now, though, the Las Vegas native is focused on his role as UT’s ace.

“I grew up watching Texas win and hosting regionals and hosting super regionals,” Kingham said. “I dreamed as a kid to be in that position one day.”