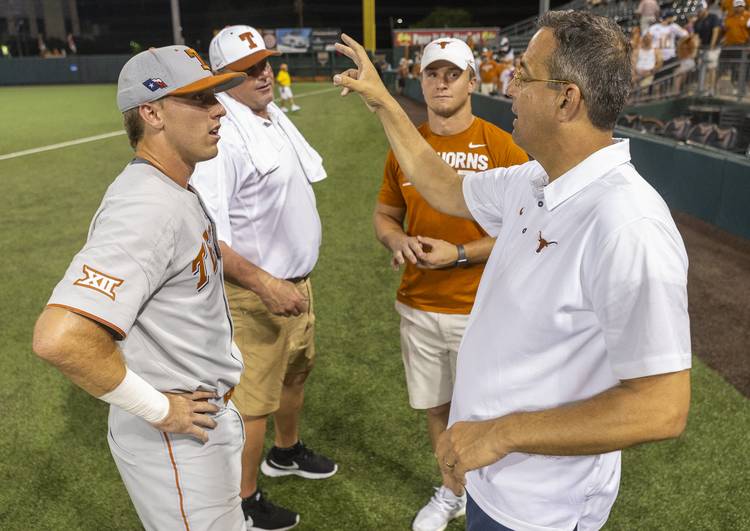 It’s somewhat mind-boggling how Texas has gone through four offensive coordinators in four seasons. That kind of instability helped produce a 23-27 record. There’s been similar turnover in the administrative suite.

“This is why the president hired Chris Del Conte to make these kinds of decisions,” a person familiar with Fenves’ thinking told the American-Statesman.

Del Conte operates with a simple mission statement. “All of our athletic programs are in the top 10 in the country and need to be competing for national championships,” he said. “That’s how we’re going to base it.

“Are you helping that coach and that program be a top-10 program?,” Del Conte said matter of factly. “That’s the benchmark going forward.”

Del Conte has assembled a five-person executive cabinet and has given each one clear areas of responsibility. He wants the department to be more transparent and, frankly, stop being so stubborn. “It’s not my first rodeo,” said Del Conte, an athletic administrator since 1994.

Case in point: UT’s spring game. A marketing official wanted to open the Royal-Memorial Stadium field to fans prior to kickoff for photos. No, she was told. That’s not how things are done at Texas.

Del Conte considered the proposal for a few seconds and made a snap decision. “Boom, look around us, my man,” he said as hundreds of fans walked the field, snapped photos and made instant memories. “This is happening.” It was an easy win for fans and didn’t cost UT a dime.

What sounds basic often gets swamped in bureaucracy inside Texas athletics. Or, as shown in recent years, things get torpedoed by infighting. Staffers rise and fall in political strength depending on who’s in charge.

Mike Perrin, a Houston attorney who played football for Darrell Royal, was literally grilling salmon and asparagus on Labor Day 2015 when Fenves called. Perrin stepped in as an interim athletic director and ran almost every decision — big or small — through Fenves’ office.

A people-pleaser, Perrin aced his sole mission over the next two years: Don’t be like Steve Patterson. The trains continued running on time, but the school’s major sports just spun their wheels.

Perrin’s biggest accomplishment could be the hiring of baseball coach David Pierce in 2016. After a long, drawn-out search, Texas hired Pierce away from Tulane. The Longhorns won the Big 12 title this season and are playing in the NCAA super regionals this weekend in Pierce’s second season.

Over the last few years, the Texas staff had ballooned to 448 full-time members, 90 of which make more than $100,000 annually, according to salary data obtained by the American-Statesman.

From his eight-year perch as TCU’s athletic director, Del Conte could watch all these machinations with amusement. After all, once derided as little, ol’ TCU is riding a four-year winning streak over Texas in football. But now, he’s at the controls in Austin.

Six months after his hiring, Del Conte personally interviewed all staffers. Some were easy; others were brutal. “He just came right out and asked, ‘What exactly do you do?,’ ” one source said.

At least 13 people were laid off on Monday, the Statesman learned, although UT sources said the number was slightly higher. Some inside the department believe more layoffs are coming. If that happens, it’s almost certain Del Conte will have discussed it with his five-person cabinet.

Martin will oversee external services and be directly responsible for the game-day environment. Del Conte told fans on the “This is Texas Tour” that he wants to remove cars from San Jacinto Boulevard and turn the street into a game-day carnival.

Martin’s hiring has longtime UT watchers — even some from the Bellmont Hall days — wondering about Chris Plonsky’s future.

The longtime UT administrator already had an updated bio posted on the school’s website on Friday. Her new role under Del Conte is “chief of staff, executive senior associate athletics director and senior woman administrator.” She had been the women’s athletic director since April 2001.

Essentially, Plonsky will directly oversee anything that impacts the athlete, from academics to nutrition to the training room. It’s not a job for greenhorns.

Eichorst did not have a warm-and-fuzzy reputation during his time at Nebraska. He was fired primarily for the football team’s on-field performance. At UT, Eichorst will oversee internal operations like the business office and human resources, Del Conte said. It’s an important but relatively low-profile job.

Arthur Johnson will continue to oversee facilities and game management, Del Conte said. Amy Folan will continue in her role with development, working with the Longhorn Foundation.

All of the sports will be divided up, giving coaches a direct line to the AD’s suite.

Del Conte wants open communication, too. He plans to have an entire department-wide staff meeting every six weeks. He’ll meet directly with head coaches once a month. Anyone who has an assistant or associate athletic director title will meet every two weeks. And the executive-level cabinet will meet every week.

“To truly be effective as a department, sometime less is more,” Del Conte said. “I need four or five people in the room making critical decisions to help our athletic program be successful. I’ve been around long enough that if you had 10 or 12, it’s too much. More people are cutting up a pie. But if you have six people, you have a divergence of ideas.”

And many believe that’s been UT’s problem in recent years. Too many cooks in the kitchen. Too many staffers trying to get their way. Too many boosters needing their egos stroked and influence heeded. Too much of everything, and not enough winning to justify it all.

“By having that internal team and having who we have,” Del Conte said, “we can start addressing our facility needs and the wants and wishes of our coaches and student-athletes, which ultimately what my job is.”

With the Golden Eagles soaring on offense, Texas looks to keep its outfield a ‘no-fly zone’