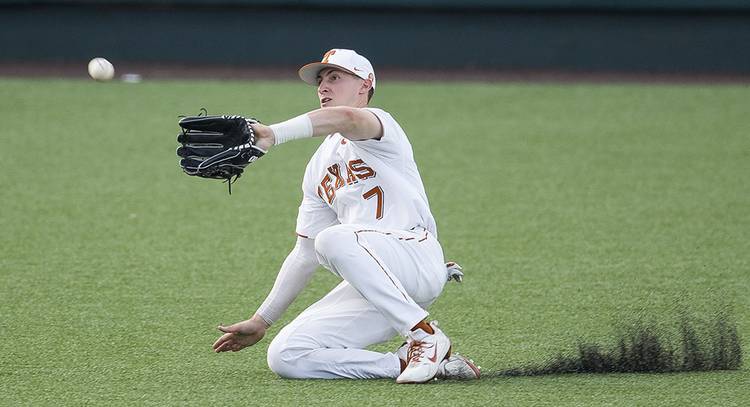 They say that defense wins championship. At this moment, though, Texas will settle for that cliché holding true in a super regional.

Texas (40-20) enters this weekend’s super regional against Tennessee Tech (52-10) with a fielding percentage of .978 that ranks 21st nationally. Only four of the 16 teams still playing in the NCAA tournament are better. The Longhorns have been boosted by shortstop David Hamilton, 68 double plays and a few defensive plays that second baseman Kody Clemens has snuck into his 2018 highlight reel.

Perhaps overlooked has been an outfield that sophomore Austin Todd once labeled a “no-fly zone.” In February, Todd reasoned that Texas had enough speed in the outfield to run down most potential hits. If a baseball were to fall, “then the guy that hit that just earned it.”

“That’s still what we like to call it, a no-fly zone. Also, a no-run zone. We don’t like people to run on us either,” junior Masen Hibbeler said. “We take our preparation real serious out there. It shows on the field.”

The outfield should be kept busy by Tennessee Tech, which boasts one of the country’s top offenses. The Golden Eagles lead the nation in batting average (.338), runs (630) and home runs, and their 134 homers are 36 more than second-place Clemson. Tech ranks sixth in doubles.

A member of the Ohio Valley Conference, Tennessee Tech is 6-1 in games against teams from Power 5 conferences. Five of those games were played on the road and the Golden Eagles averaged eight runs against West Virginia, Tennessee, Vanderbilt and Ole Miss. Tech hit six home runs and five doubles in its five games at last week’s Ole Miss regional.

Of the Golden Eagles’ 129 outs, 28.7 percent were caught in the outfield. In a 2-1 elimination game win over Missouri State, Tech flied out to the outfield 13 times.

On Saturday, Texas likely will start Hibbeler in left field, Tate Shaw in center and Duke Ellis in right. Texas has started that combination in 11 of the last 13 games. (Todd, who was UT’s opening-day right fielder, has made only 20 starts as he’s battled thumb and shoulder injuries).

Earlier this week, UT coach David Pierce described Shaw as a “baseball player with a football mentality.” Shaw, who walked on at UT in 2015, made his case for more playing time in 2017 when he robbed a Kansas State batter of a home run at UFCU Disch-Falk Field. He has committed only one error in his career, and he has registered 92 putouts and three outfield assists this season.

Ellis and Hibbeler both transferred to UT from junior colleges. Ellis has recorded 94 putouts against three errors. Hibbeler, who also has played all four infield positions this season, has 41 starts in the outfield.

“I’ve always said if you can play infield, you can play outfield,” said Hibbeler, who has five outfield assists. “Luckily it was an easy transition, and I’ve just been able to roll with it all year.”

Behind its starters, Texas has depth in the outfield that Ellis described as “pretty good.” Pierce said on Friday that Todd is available to play. Andy McGuire, the team’s closer who was drafted this week by the Toronto Blue Jays as an infielder, has made nine starts in the corner outfield spots. In addition to pitching 23 1/3 innings, freshman Kamron Fields has made a few appearances in the outfield, too.

“Early on, I felt like we were very deep in the infield and thin in the outfield,” Pierce said. “It’s kind of flipped.”

With coolers and craziness, the ‘OccupyLF’ crowd bringing electricity back to Disch-Falk Field