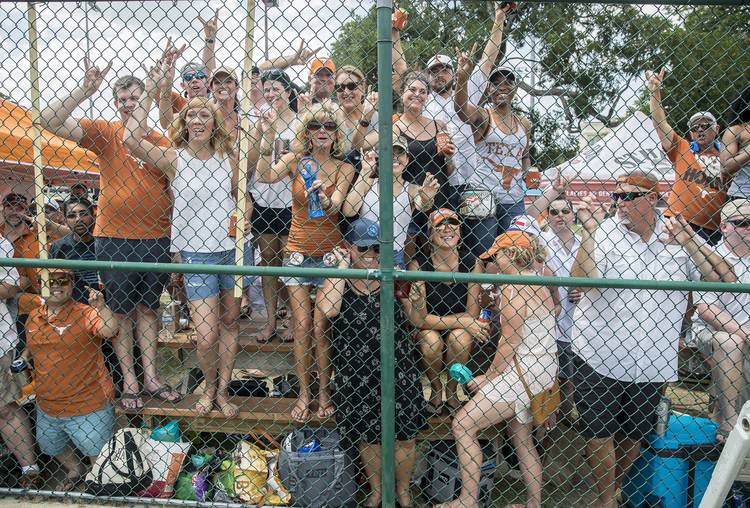 Fans who call themselves OccupyLF cheer for the Longhorns during the NCAA Austin Super Regional at UFCU Disch-Falk Field on Saturday. RICARDO B. BRAZZIELL / AMERICAN-STATESMAN

Most Texas baseball fans under 40 probably never heard of the Wild Bunch. That’s too bad, too. They were like the Rolling Stones or U2. You had to see them live at UFCU Disch-Falk Field.

“Back in the day, they intimidated teams when they came in,” said Bill Bates, a two-time All-America second baseman at Texas in 1984 and ’85. The Wild Bunch stood behind the opposing team’s dugout and just let ’em have it for three hours.

“These guys are all on Medicare now,” Bates said Saturday.

To which the wildest one of all, Scott Wilson, said dryly, “I’m on Medicare.”

Today, the spirit of that unruly bunch lives beyond left field, just a few feet past the foul pole, held back by a green chain-link fence. The Big 12 champion Longhorns brought the energy back to the field this season. But OccupyLF, a rollicking band of longtime UT regulars and a revolving cast of newcomers, is what has revved up the atmosphere at the Disch.

With every big play Saturday, OccupyLFers shouted, “Fire the damn cannon!” When Duke Ellis doubled in the first inning, the replay board caught a glimpse of the left field crowd. “I see us!” someone shouted.

Even nonpartisan interlopers are encouraged to get involved. “I haven’t seen you drinking one beer yet!” Stacey Underwood shouted at a reporter. When in left field, right?

Me with the ⁦@OccupyLF⁩ crowd standing on a picnic table. First pitch is moments away. pic.twitter.com/7jXz1zsfII

The Longhorns have noticed something special is happening beyond that fence. After winning the NCAA regional last weekend, players sprinted to left field to join the OccupyLF crowd. Second baseman Kody Clemens fired Smokey the Cannon. It was mass hysteria out there.

Put another way, it’s what Texas baseball used to be like on a regular basis.

“This is the Wild Bunch on steroids,” said Brooks Kieschnick, a three-time All-American in the early 1990s. He was hanging out with OccupyLF during Saturday’s NCAA super regional matchup against Tennessee Tech. “These guys do it right.”

The atmosphere beyond left field was already electric at 11:30 a.m. Saturday, with the first pitch scheduled for 2 p.m. Sweltering, too. But it’s hard to complain about 93-degree heat when you’ve got one Yeti cooler after another packed with beer.

“This place was a ghost town the last four years. A ghost town,” Marc Pena said. The 39-year-old grew up coming to Texas games with his dad back when fans tailgated on “Fantasy Island,” the tree-dotted parking lot between the stadium and Interstate 35. That lot is long gone as UT built the East Campus garage on top of it. And for many years, so was the magic that went with it.

Years ago, fans started congregating around the left field corner, watching games without having to buy a ticket. Former UT athletic director DeLoss Dodds put up a plywood fence before the 2012 season and put advertisements on it.

“The sign goes up in early 2012, and we don’t host a regional for several years,” Jeff Cross said.

Cross, another longtime UT fan, said his wife, Robbi, and Pena went to talk to Dodds about the wall. Alas, nothing changed. “So the atmosphere kind of died,” he said.

Two picnic tables were brought in, and fans stood on them to see over the plywood. It just wasn’t the same. The Longhorns drifted into obscurity in the standings, and fans fell into a malaise, too.

In February during a home series against Northwestern, new Texas athletic director Chris Del Conte walked by the area and stopped to talk.

“Unprovoked, he looked at the plywood board and said, ‘What is that?’ ” Pena said.

After the final out, four maintenance workers rolled up in golf carts and started taking the plywood down.

“You want people to come and participate,” Del Conte said Saturday. “Why would you put up barriers? It made no sense to me. So, take it down.”

Longtime Texas fan Jim Johnson said he’s been a football fan since the 1980s. He, like many in left field, actually has season tickets. It’s their way to support the team.

“Nine out of 10 times, I go on in and go to my seat,” Johnson said. “When they took the wall down, that was a cure for me. I’m not climbing up and down on that picnic table.”

And this ends up being the year Texas wins the Big 12 title and hosts an NCAA regional and a super regional. Coincidence?

“We called that the curse of Texas baseball,” Pena said. “We would laugh out here and call it the equivalent of the Colt McCoy hit at the Rose Bowl. That wall killed Texas baseball.”

Well, the atmosphere at the Disch is alive and well again — that’s for sure.

Pena is active running the OccupyLF Twitter account. Fans one and all, even total strangers, are invited to come out to left field before, during or after the game, several OccupyLF members said.

Stopped midinterview by a close friend, Pena was asked, “Where should we put the tequila?”

Austin Beerworks and Hi Sign Brewing know a good thing when they see it. They donated 20 cases of beer to OccupyLF for this weekend’s super regional. “We’ve never had a beer sponsor out here,” Pena said.

Michael Rychlik, a UT season-ticket holder, drove down from Kennedale just to see this weekend’s action. Does he know Pena? “As of today, yes,” Rychlik said. “This guy’s a celebrity.”

Not to be outdone, Tennessee Tech officials had quite the scene beyond the center field wall. They loaded up a trailer with purple tents and marketing signs — and some of the baseball team’s equipment — and left Cookeville, Tenn., at 2 p.m. Wednesday.

Athletic director Mark Wilson said his department has a total budget of $14 million. Texas’ athletic budget is more than $200 million. Still, the Golden Eagles had more than 300 fans in Austin from Cookeville. One of those was Tennessee Tech’s most famous alum — astronaut Barry Wilmore.

Those fans, fueled by PoK-e-Jo’s catering and cold drinks, made a hell of a racket when Tech took a 5-3 lead in the fifth inning.

“What I know of Tennessee Tech, the people that went there are faithful,” Wilmore said. “We’re a smaller school. You don’t hear about us a lot. But they are faithful. So that’s why you see this.”

So are the Texas fans out in left field. Faithful is an understatement.

“It’s hard to describe,” said Don Kingham, UT pitcher Nolan Kingham’s father. “Unless you’re out here all the time, you don’t know it. If you’re here, you feel it.”

With the Golden Eagles soaring on offense, Texas looks to keep its outfield a ‘no-fly zone’