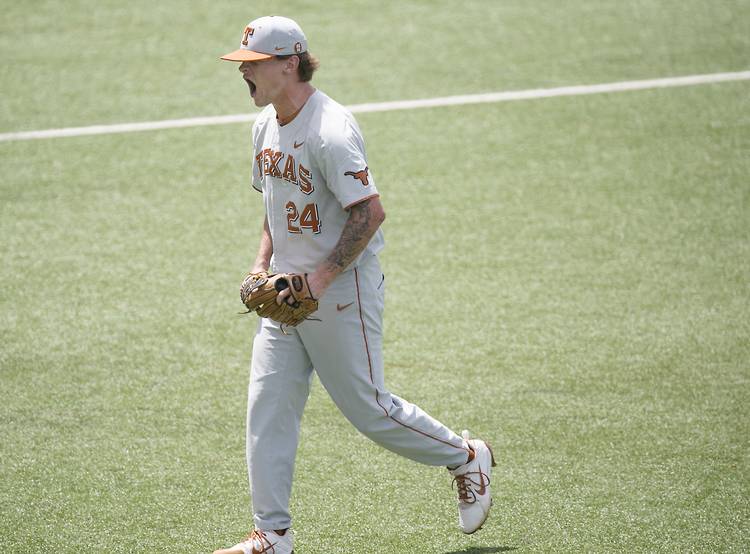 Backing swagger with skill, the Texas Longhorns saved their baseball season on Sunday.

Kody Clemens drove in two runs and Texas had two of its starting pitchers subdue Tennessee Tech’s offense in an emotional 4-2 win at UFCU Disch-Falk Field. The victory tied up a super regional that opened with Tennessee Tech’s 5-4 triumph on Saturday.

“Big-time players step up in big-time situations,” junior pitcher Chase Shugart said. “That’s an emotional situation for anybody. It doesn’t matter what is going on. If we don’t feed off the emotion, we’re dead the whole time.”

Over the first two innings, Texas followed the same recipe: Walk, bunt and double. In both innings, Texas advanced a runner from a bunt who had drawn a lead-off walk. Then, a left-handed bat — Clemens in the first inning and Ryan Reynolds in the second — doubled home that runner against Travis Moths, a right-handed draft pick of the Arizona Diamondbacks.

Tennessee Tech scored on a second-inning error by Clemens, but the All-American second baseman atoned for that blunder with a bomb. With one out in the third inning, Clemens lifted Texas to a 3-1 lead with his 23rd home run of the season. Not one to be timid, Clemens flipped his bat and then flashed the Golden Eagles’ dugout a “horns up” sign as he rounded third base.

“It’s an emotional game, heat of the moment,” Clemens said.

Clemens was not the only Longhorn who was animated on a toasty afternoon. After a third-inning strikeout, Shugart let out what was arguably the afternoon’s most-exuberant display of emotion. In what may have been his final appearance at UFCU Disch-Falk Field, Shugart provided what Tennessee Tech coach Matt Bragga called “one of the best performances we’ve seen this year.”

“Coach (David) Pierce said in the team meeting before we even started stretching, just empty the tank,” Shugart said. “I basically just went out there and let it all hang out.”

With 15 starts this season, Henley was the presumed starter for Monday. Texas instead chose to focus on Sunday’s result. David Garza homered off the first pitch thrown by Henley, but that was the only blemish tied to his first-career save. Henley worked three innings and retired the nine batters he faced after Garza.

Opposing batters were hitting .269 against Shugart and Henley. On Sunday, they silenced a Tennessee Tech offense that leads the NCAA in batting average, homers and scoring. Tennessee Tech’s previous season-low for hits was five.

“At the end of the day, we didn’t hit enough,” Bragga said. “Texas pitching was outstanding today. They dominated our hitters, did a good job.”

Bragga said that left-hander Alex Hursey will start for Tennessee Tech in the decisive duel. Pierce did not announce his pitching plans for Monday. He did, however, announce that all of his pitchers — even Shugart, Henley and Nolan Kingham, who was Saturday’s starter — were available.

Said Pierce: “It may be one hitter, but everybody’s available. If they want to try to go to Omaha, and that’s kind of the plan.”

Around the bases: Texas turned its 70th and 71st double plays of the season. UT is tied with Cincinnati for the NCAA lead in that statistical category. … An announced crowd of 7,151 was the second-best showing at UFCU Disch-Falk Field this season. … Texas leadoff hitter David Hamilton drew three walks. … Clemens became the first Longhorn to drive in 70 runs since Kyle Russell in 2007.