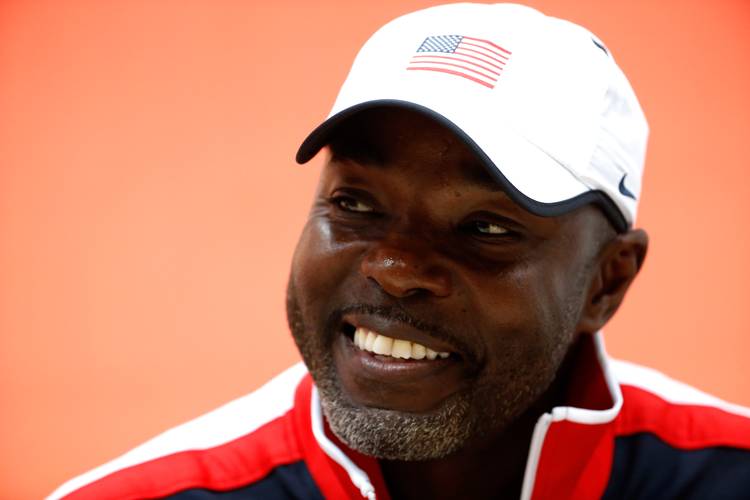 Head coach Edrick Floreal of the United States answers questions during the United States news conference ahead of the 15th IAAF World Athletics Championships Beijing 2015 at the Beijing National Stadium on August 21, 2015 in Beijing, China. (Photo by Christian Petersen/Getty Images for IAAF)

Edrick Floréal will be the next head coach of Texas’ track and field program, the school announced on Wednesday.

The coaching hire — the first of Chris Del Conte’s tenure as UT’s director of athletics — comes four months after the dismissal of Mario Sategna. Floréal will be introduced at a press conference on Thursday.

“(Texas is) the elite of the elite in track and field programs, and the potential to achieve greatness is fantastic,” Floréal said in a press release. “You have the premier track and field state in the country to recruit in, a rich and proud history, and are the flagship institution of the state. It’s truly an amazing opportunity.”

Floréal, 51, spent the past six seasons at Kentucky where he coached 12 NCAA champions. He also led Stanford for six years.

In 2015, the Kentucky women were the runner-ups to Oregon at the NCAA outdoor meet.

In an interview with the American-Statesman, Del Conte said that “What I really liked about him was what he did at Stanford. He built that program up to a national power and then went to Kentucky, which has no historical track background. He built them into a power.

“It’s no different than (baseball coach) David Pierce going to Sam Houston and Tulane and then doing it here. He’s done an amazing job.”

Floréal is a 1990 graduate of Arkansas. He represented Canada in the triple jump at the 1988 and 1992 Olympics.

“People who know me know I’m a tireless worker, I’m a workaholic and love being at the track,” Floréal said.

Texas, which was led on an interim basis by Tonja Buford-Bailey, had its men and women finish 25th and 34th at the NCAA’s outdoor meet. Texas last won an NCAA team title in 2006 when the women claimed the indoor season’s top prize. In April, it was announced that Texas will host the 2019 and 2020 NCAA outdoor championships.

Buford-Bailey told the American-Statesman on Wednesday that she will not return to Texas for the 2018-19 calendar year. Buford-Bailey had worked as an associate head coach at Texas since 2013. Prior to that, the ex-Olympic hurdler was the head women’s coach at Illinois.