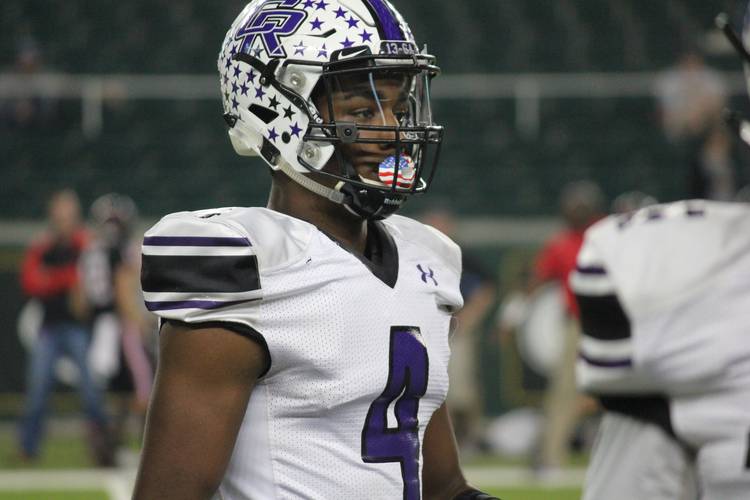 The plan was simple, until it wasn’t. Texas was punched in the face on April 29 when five-star wide receiver Garrett Wilson chose Ohio State over Tom Herman’s program despite playing high school football 10 miles from campus. Wilson, a Lake Travis product who is the No. 1-ranked player on the  2019 Fabulous 55, was UT’s top target at wide receiver for this cycle.

Texas already has two pieces in place for 2019. Cuero’s Jordan Whittington, the No. 3 player on the Fab 55, chose Texas early in the cycle and is one of the best all-around football players in the state. He plays offense and defense for Cuero, excelling at a first-team all-district level as a wide receiver and safety. The Longhorns also picked up dynamic slot receiver Jake Smith, the No. 89-ranked prospect in the entire country; he picked Texas over Notre Dame on June 3.

The ideal class for Texas involves four receivers. The plan was Whittington, Smith, Wilson and fellow Austin product Elijah Higgins from Bowie. Wilson is out of the mix and Higgins was born in Florida and is receiving a heavy push from Stanford and Ohio State. It’s clear he’s not a lock to remain in Austin and become a Longhorn. That’s caused the staff to move toward new prospects around the Lone Star State.

The Longhorns are hopeful that West Mesquite’s Dylan Wright becomes the third receiver in the class. He’s 6-foot-3 and freakishly athletic, though he’s raw because he didn’t start playing the position until his junior year.

A fourth receiver is wanted. Here are a few in-state options who have recently picked up offers from Texas:

Lewis is the newest offer after he picked one up on June 11. He also holds offers from in-state powers like TCU and Baylor. He’s a big-bodied receiver, much like Higgins. Texas already locked up its slot receiver for the cycle and wants to concentrate on finding an outside receiver due to current commitments from Smith and Whittington. Lewis impressed at a recent camp in front of the Texas coaches and was extended an offer. He caught 48 passes for 1,099 yards and 11 touchdowns as a junior.

Ellis committed to Baylor a year ago after picking up his first P5 offer. He’s amassed 22 more offers since and is considered a soft commitment to the Bears at best. An offer from Ohio State on May 30, days after picking up one from the Longhorns, cemented his place among the nation’s elite in 2019. He’s no longer underrated and was invited to The Opening Finals later this month in Frisco after posting the top SPARQ score for any wide receiver in Texas. Ellis wants to pick a school before the start of his senior year. Texas is in good position for the Austin native who openly campaigned for an offer from the Longhorns earlier in the cycle.

Anderson is a unique prospect who picked up an offer on the same day as Ellis. He’s a big, long receiver who can play on the outside, which is something guys like Whittington, Smith and Ellis could struggle to do in college because of a lack of height. Anderson doesn’t have that problem. He moved to Texas from Mississippi following his sophomore season and immediately made an impact on the Texas football scene. He was a first-team all-district selection after recording 55 catches for 850 yards and nine touchdowns.

New NCAA transfer, redshirt rules shift the balance of power toward the athlete