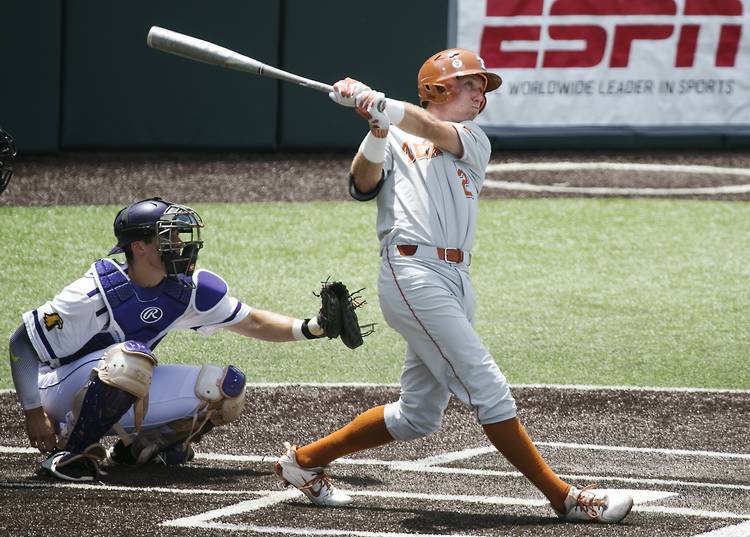 OMAHA, Neb. — Need a way to describe Kody Clemens’ junior year at Texas in 10 words or less? Here are a few suggestions:

Hitting .356 with 24 homers and 72 RBIs, Clemens is a Triple Crown winner among his teammates this season. Nationally, his home run total ranks behind only the 25 hit by Arizona State slugger Spencer Torkelson. The second baseman also has had a hand in 47 of UT’s NCAA-leading 71 double plays.

Clemens has been a wrecking ball in the postseason. In six games, Clemens is hitting .500, slugging 1.318 and contributing five home runs and 11 RBIs. Between UT’s regional final against Indiana and the second game of its super regional with Tennessee Tech, he reached base in seven straight plate appearances.

Starting this weekend, Clemens will attempt to lead the Longhorns to an NCAA title at the College World Series. Standing is UT’s way are seven teams, each of which have a Kody Clemens of their own. Here are seven names to watch in Omaha:

Like Clemens, Singer is a finalist for the Golden Spikes and Dick Howser awards. (Clemens and Singer are the only contenders for either award playing in Omaha). A 6-5 right-handed pitcher, Singer is 12-1 with a 2.30 ERA, 107 strikeouts and only 21 walks. He’s started 15 times, and Arkansas is the only team to tag him for more than three earned runs.

On the field, Shaddy ranks second on his team with his .341 batting average and 52 RBIs. He has 13 homers, three of which have been hit in the postseason. Shaddy has also driven in a run in each of Arkansas’ six games in the NCAA tournament.

Shaddy will continue his career in Washington’s organization. The Nationals used a 10th-round pick on him.

Having been taken by the White Sox with the fourth overall pick, Madrigal is the highest-drafted player in Omaha. He has missed time with a wrist injury but his .397 batting average leads the Beavers. The 5-8 infielder has 34 runs and 32 RBIs in 34 games, and he has struck out only five times in his 141 at-bats.

Jung certainly could have made a bid for Clemens’ Big 12 player of the year award. The San Antonio-raised sophomore leads the conference with his .390 average and 78 RBIs. He and teammate Gabe Holt have both scored 68 times, a number that hasn’t been exceeded by any other Big 12 players.

Said Texas Tech coach Tim Tadlock: “We’ve been fortunate enough to have him over there. But probably the biggest thing is the makeup. He brings — he’s a guy that, each and every day off day, NCAA telling you have to have an off day or coaches telling you hey you guys take a day, he’s going to hit.”

Wainhouse is listed as a pitcher and infielder, but he has primarily been Washington’s designated hitter this season. Hitting .312, he has clubbed 19 of Washington’s 40 homers and has 59 RBIs. He has homered five times in the postseason and in seven of his last 12 games.

Wainhouse, who started his career at Ole Miss, battled an injury in 2017 and did not record a single at-bat.

Small has been Mississippi State’s most reliable pitcher this year. He boasts a 3.11 ERA and opponents are hitting .238 against him. Most impressively, the 6-3 southpaw has struck out 112 batters in 89 2/3 innings.

Despite 16 starts, the redshirt sophomore who was drafted by the Diamondbacks has won only five games. In an elimination game in the regional, he surrendered two runs in a no-decision against Florida State. He wasn’t a factor in the opener of the  super regional against Vanderbilt, either.

Busch has hit 13 home runs during his sophomore season. He picked up nine of his team-high 63 RBIs in postseason wins over North Carolina A&T and Houston. In addition to a .333 average, Busch ranks 11th in the country with his 54 walks. He has 30 strikeouts.

As a freshman, Busch showcased his flair for the dramatic in back-to-back ninth innings against Florida State. In a 5-2 extra-inning win, he broke up a no-hitter with two-out single. One day later, he broke a 7-7 tie with a ninth-inning homer.

The Dotted Line: Texas is set to host a pair of important linebacker targets

Postcard from Omaha: Texas is already doing some (property) damage at CWS