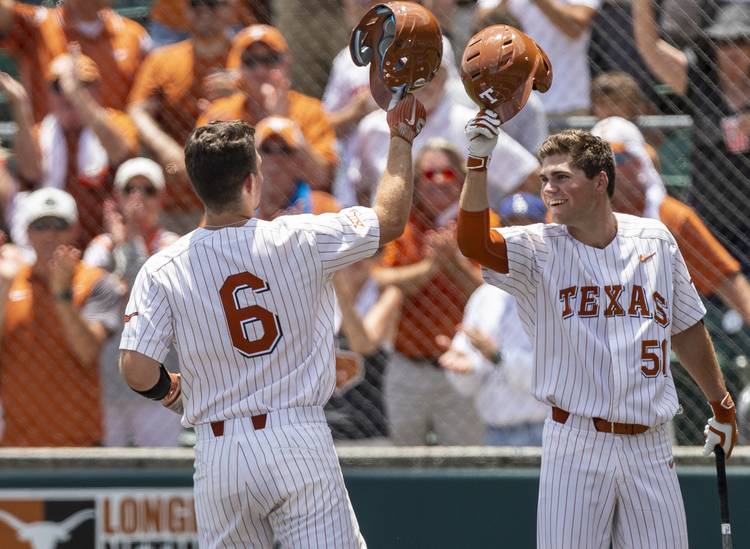 OMAHA, Neb. — When Texas and Arkansas meet at the College World Series on Sunday, the Longhorns would prefer to treat it as an introduction instead of a reunion.

Sunday’s standoff will be the 110th game in a long-standing series that threw out its first pitch in 1902. Texas is 74-35 against Arkansas, but its last win was in 2005. What happened when the Longhorns played in Fayetteville on March 13-14?

“We weren’t prepared to play them the last time we played them,”  Texas first baseman Jake McKenzie said.

Does March matter when it comes to previewing Sunday’s showdown? The Longhorns will argue it doesn’t.

Freshman Nico O’Donnell and reliever Beau Ridgeway, who have combined for three appearances since May 1, started against the Razorbacks instead of Nolan Kingham. McKenzie played second base and pitched in the series. Third baseman Ryan Reynolds and designated Zach Zubia both got playing time at first base.

Like Texas (42-21), Arkansas (44-19) has switched things up. Blaine Knight, an undefeated right-hander who will oppose Kingham on Sunday, did not appear against the Longhorns. Leadoff hitter Eric Cole contributed three RBIs from the third slot of Arkansas’ batting order in one of the games.

“We’re not too worried about the last time we played them. We’re not taking those games into account when we play them this time,” McKenzie said. “We know it’s a different go-around. We both have our Friday night guys going. It will be a different game.”

Said UT junior Kody Clemens: “Obviously, (Arkansas) smacked us around in the midweek series. But we’ve got our weekend starters; they’re going to have their weekend starters. A little different situation, the magnitude of the game is obviously a lot more important. I’m excited. It’s going to be a good game.”

Texas had dropped three straight games to Stanford ahead of its trip to Arkansas. With those losses, UT’s record slumped to 9-9.

Perhaps inspired by a players-only meeting called by Clemens after the nine-run loss or the death of former coach Augie Garrido on March 15, Texas responded with a sweep of Kansas in a Big 12 series. Since the second loss to Arkansas, Texas has won 33 of its 45 games.

Three of those victories secured the Big 12 championship, an NCAA regional and an NCAA super regional.

“Guys at the beginning of the year, everyone’s worried about results, including me,” Kingham said. “Now, we’re just worrying about one pitch at a time, one inning at a time. Trying to win that inning. We’ve come a long way, and we’ve grown a lot.”

Arkansas coach Dave Van Horn said the Razorbacks have picked up a lot of confidence since the Longhorns last saw them. They have also earned 31 more wins.

In addition to a few edits to his batting order, Van Horn said the use of his bullpen has been Arkansas’ biggest change since mid-March.

“Other than that, I don’t think there’s been a lot of changes,” Van Horn said. “Just the fact that they know it better and we know what to expect. And I think we’ve been able to make moves a little better and maybe match up a little better than we could early in the season. We learned our players a little bit.”

Postcard from Omaha: Texas is already doing some (property) damage at CWS