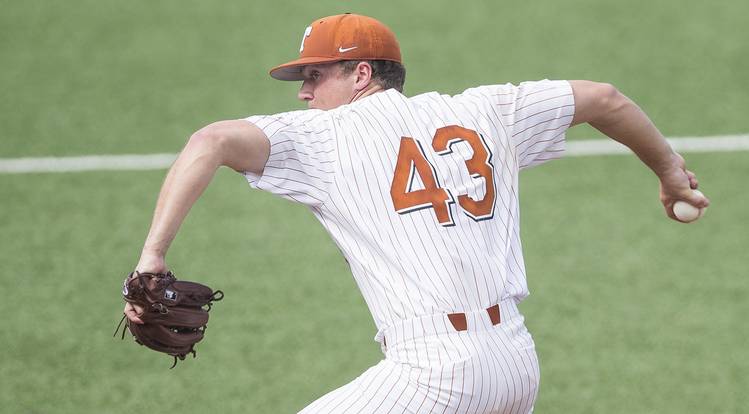 Texas pitcher Andy McGuire has struggled lately in the closer role and will be on a short leash in Omaha. NICK WAGNER / AMERICAN-STATESMAN

Should Texas be leading in the ninth inning in Sunday’s game against Arkansas, will Andy McGuire get the call from the bullpen?

McGuire has recorded a team-high seven saves in 2018. With a 2.01 ERA over 27 appearances, he ranks third among the Longhorns in that statistical category. He also has 28 strikeouts against 13 walks.

McGuire, though, has struggled in his last two appearances, UT’s regional- and super regional-clinching wins over Indiana and Tennessee Tech. Against Indiana, McGuire recorded a ninth-inning out but loaded the bases before teammate Chase Shugart struck out the final two batters in a 3-2 win. Eight days later, McGuire registered a walk and a strikeout in the final frame of a 5-2 victory that Nolan Kingham closed out.

Pierce stopped short of guaranteeing that McGuire would get Texas’ next save opportunity. He did say that he and the players still trust McGuire. But the pitcher will be on a short leash moving forward.

“If he starts slow, I just don’t feel like we can continue to extend that if the game’s on the line,” Pierce said.

A redshirt junior who has worked his way back into the spotlight after being left off UT’s roster the past two seasons, McGuire maintained his confidence Friday. He said he realized his arm slot had changed in his last two outings, and that was affecting his ability to hit the lower part of the strike zone. Both Pierce and McGuire said they had a positive one-on-one meeting.

“I’m totally prepared to come out and hopefully get some big outs and some opportunities,” said McGuire, who was drafted by Toronto as an infielder. “I think we’re all ready to be here and go out and take one home to Austin.”

HAPPIEST PLACE ON EARTH: Hitting coach Sean Allen is making his initial trip to the College World Series after working with Pierce for the past seven seasons. Asked if TD Ameritrade Park lived up to its billing, Allen said, “It’s just as David described. This is Disneyland for college baseball.”

QUOTABLE: “I feel great. I’m ready to go. Body’s great, arm’s great. I’m ready to go.” — Kingham, who will be UT’s starting pitcher against Arkansas. Before his two postseason starts this month, Kingham battled the flu and had a cyst removed. The right-hander, who was drafted by the Atlanta Braves, is 8-4 with a 4.34 ERA.

TODAY’S NOTABLE NUMBER: 6. On Saturday, North Carolina needed six pitchers in its College World Series-opening win over Oregon State. Injured starter Gianluca Dalatri was pulled from the game in the first inning of the 8-6 win. Five Tar Heels relievers then lasted 1 1/3 to 2 1/3 innings.

It was the seventh time this season that at least six players pitched in a win for North Carolina (44-18).

Not to be outdone, Oregon State (49-11-1) used four pitchers in the loss. The game lasted 4 hours, 24 minutes. It was the longest nine-inning game in the history of the College World Series.

TWEET OF THE DAY: In Saturday’s newspaper, Kirk Bohls opined about whether Texas was still one of Arkansas’ biggest rivals. It appears the official Twitter account for Arkansas’ baseball team answered that question on Friday night.

Texas is 74-35 in its all-time series with its old Southwest Conference foe, but Arkansas has won the past three meetings. UT has won three of the four wars the two teams have waged in Omaha.

Postcard from Omaha: The next Vince Young? Kamron Fields instead looking to shine as a reliever