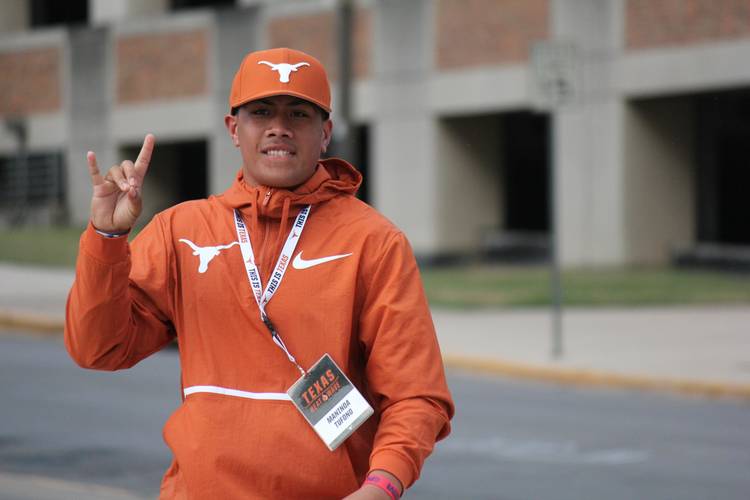 One of the top-rated targets on campus for Texas’ Heat Wave recruiting event over the weekend was four-star prospect Maninoa Tufono. The 6-3, 225-pound middle linebacker is on a tour of unofficial visits. He took in Texas on Saturday and Sunday. He’ll visit LSU and then Alabama before returning home to Hawaii and releasing a top five.

“My plan is to return home, release my top five schools and then take official visits to those schools in the fall. I’ll probably sign in February, or even December if we’re ready to make that decision,” Tufono said on Saturday. “Texas is up there and close to the top school. I felt the love, the family atmosphere and the drive to a national championship.”

Tufono stopped short of guaranteeing that Texas would be in his top five, but it’s likely that the UT staff did enough to earn an official visit. One of the reasons is recruiting analyst Jake Langi, a fellow Polynesian with deep roots in Hawaii. A pipeline of Polynesians was discussed on the trip.

Texas is also in the mix for five-star defensive tackle and fellow Hawaiian Faatui Tuitele.

“Jake Langi is a Polynesian guy I can relate to,” Tufono said. “There aren’t a lot of guys here from Hawaii, but I’m willing to make my own name and start a tradition for Polynesians and guys from Hawaii. They talked to me about starting the pipeline.”

Tufono said education and his relationship with the coaching staff will ultimately determine his school choice. Tom Herman and defensive coordinator Todd Orlando did a great job building a relationship with him during the pool party.

“Today was unbelievable,” Tufono said. “Grateful to the staff for hosting me and my family. It was great to keep building the relationship with coach Herman and coach Orlando as I start to wind down the recruiting process. The coaching staff sticks out. From the tutors to the recruiting staff to the coaches.

“When they say, Texas takes care of Texas, it is true. I got to see it all firsthand.”

The defensive back from Grayson, Ga. made a return visit to his future home Saturday for the Heat Wave. It allowed the four-star cornerback to hang out with future teammates and members of the 2019 and 2020 classes in a laid-back setting. It was more party than college visit. It’s harder to keep out-of-state commitments enamored with a program from afar.

That doesn’t appear to be a concern with Watson.

“Everything went well,” Watson said on Saturday. “I got here Friday and stayed with Jalen Green. It’s been great. It’s a strong commitment and this is where I want to be and where I want to play. Something about Texas is different. As a player, I can see myself here. I used to play with them as a kid on video games.”

Watson is a 6-2, 187-pound defensive back. He’s played safety in high school and was recruited to Texas as a cornerback. It was the same for Caden Sterns, one of the top safety prospects in the country and a member of the 2018 recruiting class. Watson can play both positions, and that versatility gives defensive backs coach Jason Washington a lot of options. The two continue to grow closer.

“Coach Washington and I continue to grow our relationship the more time goes on,” Watson said. “I’ve gotten to know him as a man and a coach. Everyone is acting like I’m already here and on the team.”

Jared Wiley returns to campus as a commit

Saturday wasn’t the first time Wiley visited Austin. He did so numerous times as a tight end target. The three-star from Temple returned to campus for the Heat Wave for the first time since pledging to the Longhorns over Missouri and Houston.

The 6-6, 225-pound prospect will enroll early and sign in December. It’ll give the high school quarterback a head-start to win snaps as a freshman. It also means the star baseball player will forego his final prep season on the diamond.

“I knew getting to college early was something I wanted to as a junior, so I treated last year as my final year as baseball,” Wiley said. “It isn’t easy, but I know it is something that is best for me. I’m excited to get here and go to work. My focus now is on my senior season of football.”

Postcard from Omaha: For one current and former Texas player, this CWS is better late than never