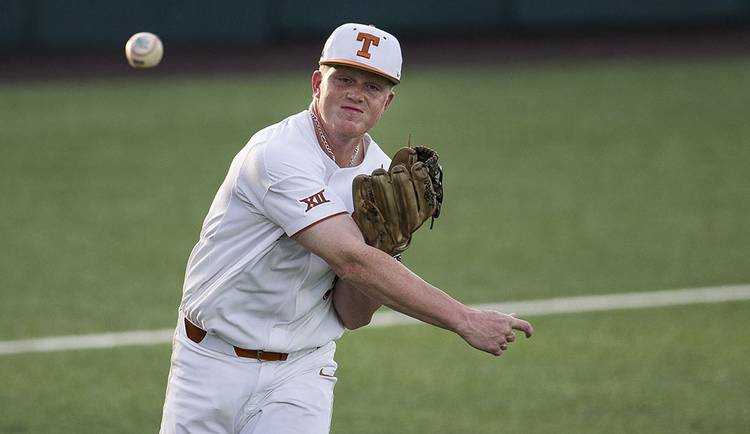 Texas pitcher Ryan Reynolds (5) throws the ball to first base during an NCAA baseball game against Houston in Austin, Texas, on Tuesday, April 24, 2018. NICK WAGNER / AMERICAN-STATESMAN

OMAHA, Neb. — Ryan Reynolds is playing in the College World Series for the first time, a level that the Texas third baseman’s dad, Shane, never quite reached. But he did come close back in 1987, when he went 6-0 with a high ERA but was left off the Longhorns’ CWS roster and was bitterly disappointed.

“I think he’s gotten over it,” Reynolds said, “but he was very disappointed. Every baseball player wants to come to the College World Series. Coach (Cliff) Gustafson wanted him to be a submariner. My dad said he tried it, but wanted to stick to the way he was pitching.”

It paid off for Shane Reynolds, who pitched for 13 major-league seasons, 11 of them with the Houston Astros, and won 114 games with 1,403 strikeouts.

His coach, David Pierce, wasn’t as certain. He didn’t think either Petrinsky’s warning-track fly or the ball Zubia hit in the fourth would leave TD Ameritrade either.

“I think D.J. got jammed a little and kind of hit it off the handle,” Pierce said Monday. “Zach hit the mess out of it, but right into the wind.”

GENERATION GAP: Longhorn Network broadcaster Lowell Galindo is enjoying his first trip to the CWS, but so is his son, Mack, and his father, Mayo. The three generations of Galindos are having the time of their lives.

Mayo Galindo, an orthopedic surgeon in San Antonio, once pitched for the University of Dallas and threw in a low-scoring loss to the Longhorns in 1975 in Texas’ championship season and its first at Disch-Falk Field. Lowell said an American-Statesman beat writer described his dad’s pitches as “moon balls” in the newspaper and quoted former UT coach Cliff Gustafson as saying Galindo was “the slowest pitcher I’ve ever seen.”

Mayo bought a Mizuno glove at the ballpark for each of them before he had to leave Omaha during the nearly three-hour rain delay that halted the Texas-Arkansas game on Sunday. Mack, a 10-year-old first baseman/pitcher whom Lowell coaches, was flashing his blue-and-red leather Monday at Texas’ practice.

For the Red Raiders, their all-time CWS record improved to 2-4. Want to guess who both wins have come against? Florida.

Tech pitching kept the Gators in check with Ryan Shetter coming out of the bullpen in the third inning and holding Florida to three hits and a single run in 4 1/3 innings. He balked in a run but rallied and struck out seven.

Tech coach Tim Tadlock wasn’t surprised by the outings of Shetter and Ty Harpenau, who threw the last 2 2/3 innings to nail down the win. Shetter was a ninth-round pick of the Atlanta Braves last week and Harpenau went to the same team in the 16th.

“I guess the word’s out. First of all, they can both really pitch,” Tadlock said of Shetter and starter Dylan Ducek, who lasted just two innings. “They can both execute pitches. They’re both very selfless in what they do. There’s a lot of guys that in Ryan’s shoes would rather start. There’s a lot of guys probably when you pull them in the second inning they probably would rather not come out. But they know what we’re doing. We’re doing for the good of the team and that’s kind of our plan going in. And it’s been kind of neat to watch.”

STAT OF THE DAY: Florida — Texas’ opponent on Tuesday — was just 1 for 15 with runners on base and 0 for 7 with runners in scoring position against Tech.

ETC.: Texas first baseman Jake McKenzie said Arkansas’ Heston Kjerstad used a profanity as he shoved him to the ground after a play at first base on Sunday. “He got all mad,” McKenzie said. “But that’s not my thing.”

With its season on the line, Texas looks to end Florida’s reign in college baseball