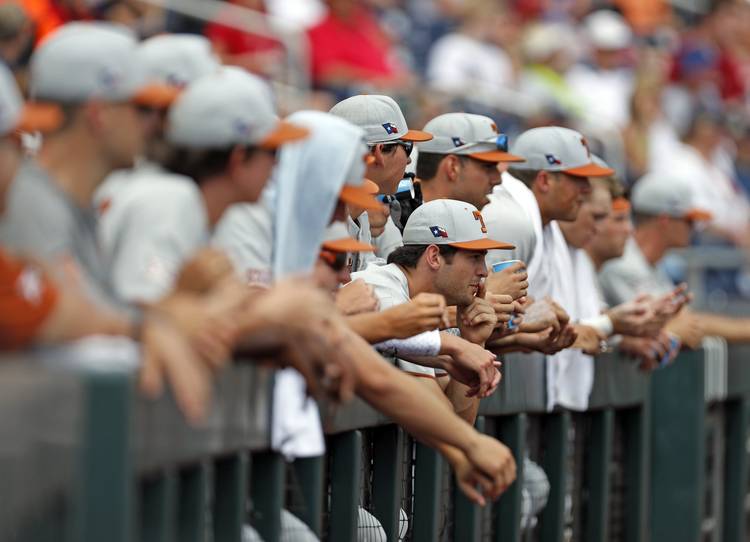 Texas baseball players watch the game from the dugout during a College World Series game against Arkansas on June 17, 2018 at TD Ameritrade Park in Omaha, Neb. [Brad Tollefson/A-J Media]

OMAHA, Neb. — If Texas wants to stay in contention for the NCAA championship, the Longhorns need to take out the reigning kings of college baseball.

Texas (42-22) meets Florida (47-20) on Tuesday at TD Ameritrade Park for an elimination game at the College World Series. The Gators are not only this NCAA tournament’s top seed, they’re also the defending national champions.

On Monday, though, the Longhorns weren’t sweating the challenge. Not even on a 91-degree afternoon.

“It’s not that intimidating,” said UT sophomore pitcher Blair Henley, who’ll start on Tuesday. “Obviously, intimidation comes from winning and every team that wins is intimidating. We’re going to go out there and treat them like any other team. We’ll see how it goes.”

Henley is an all-conference honoree with a 6-6 record, and his 3.32 ERA is the best among UT’s full-time starters. In his last start, he went 7 1/3 innings in UT’s regional-clinching win over Indiana on June 3.

Henley will be backed by every pitcher on UT’s postseason roster with the exception of Nolan Kingham, who threw 82 pitches in Sunday’s 11-5 loss to Arkansas. The Gators are hitting .276 and scoring 6.6 runs per game, and their 97 home runs — the 97th of which was hit in Sunday’s 6-3 loss to Texas Tech — rank third in the country behind Tennessee Tech and Clemson.

“They capitalize on mistakes,” said Henley, whose team held Tennessee Tech to one homer in its three-game super regional series. “Minimize those as much as possible and execute, but go after them.”

The Longhorns are 5-6 this season vs. pitchers who were taken in the first five rounds of the draft.

How Texas has fared this season vs. pitchers who were taken in the first five rounds of the 2018 MLB draft.

Henley will be opposed by Florida right-hander Jackson Kowar, who is 9-5 with a 3.24 ERA and 102 strikeouts in 105 2/3 innings. The Kansas City Royals made him the 33rd overall pick in this month’s MLB draft. He’ll be the highest draftee UT will have faced this season. Texas coach David Pierce said the 6-6 Kowar can hit 96 miles per hour and has a “plus change-up and it has split action to it.” He compared Kowar to Tennessee Tech’s Travis Moths; in a 4-2 win over the Golden Eagles on June 10, the Longhorns got four runs and six hits over 6 2/3 innings against the Arizona Diamondbacks-drafted Moths.

Three of Florida’s 20 losses have come in the NCAA postseason. The Gators also went 1-2 in the SEC tournament and were pushed by Florida Atlantic and Auburn in the deciding games of their Gainesville-hosted regional and super regional.

Sunday night against Texas Tech, Gators ace Brady Singer was pelted for a season-high nine hits and five runs (three of which were unearned). Florida’s offense was held under four runs for the third straight game.

“At the end of the day — I talked to the team at the end — there’s no rewind button here. We lost. So we’ve got to move forward,” Florida coach Kevin O’Sullivan said Sunday night. “I think Virginia in ’15 maybe lost the first game, if I’m not mistaken, and came back to win it. It’s not impossible. It’s certainly doable.”

Texas is also aware of the math needed to stay alive in Omaha. The Longhorns need to win four straight games to advance to the CWS championship, which is a best-of-three series. One more loss ahead of that, however, means the end of UT’s season.

Postcard from Omaha: For one current and former Texas player, this CWS is better late than never