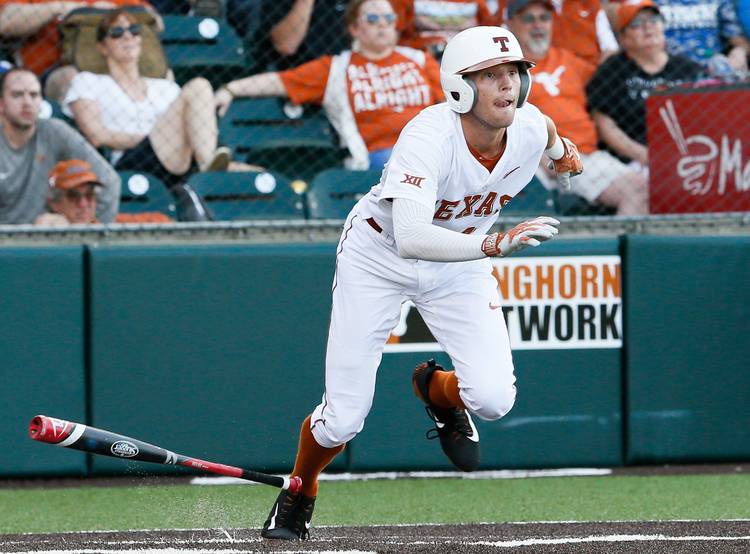 OMAHA, Neb. — One thing the Longhorns didn’t see a lot of this season? Pinch-hitting.

Over its 65 games, Texas (42-23) used a pinch-hitter 31 times. The biggest of those at-bats coming off the bench was Austin Todd’s two-run single in a win over Stanford in March. Ahead of using two in Tuesday’s 6-1 season-ending loss to Florida, a Longhorns pinch-hitter last appeared in a 16-5 loss at Texas Tech on May 5.

On Monday, Texas coach David Pierce said the lack of pinch-hitting was due to a thin bench and Todd’s health. Of the non-starters, only Todd, Michael McCann and Andy McGuire had more than 15 at-bats. McGuire also was UT’s closer, which complicated his availability as a pinch-hitter.

“Philosophy-wise, I’d like to have a little bit more depth, especially with matchups. We just don’t have it,” Pierce said.

Todd, hitting .208 over 72 at-bats, is the outlier on the bench. The Round Rock-raised outfielder opened the season in the clean-up slot, and he hit a walk-off homer in UT’s second game. But he battled a thumb injury throughout most of the season. Then, inserted back into the starting lineup against TCU on May 17, he separated his shoulder while trying to make a diving catch.

On Monday, Todd wasn’t complaining about his hard-luck sophomore season. Todd said his left thumb was fully healthy. The shoulder is “OK, it’s pretty good,” although there are certain movements that give him pause.

“It’s all part of a plan,” Todd said. “I think God is pushing me through this tough time and it’s for a reason. Who knows what that reason is, but you’ve just got to keep fighting through it.”

A native of New Braunfels, Westburg’s offensive outburst tied a College World Series record. Six players have driven in seven runs in a game, the last of which was Tennessee’s Kris Bennett in 2001.

QUOTABLE: “You got a mafia. You got a sheriff. And then you have a doctor. So the mafia chooses, the mafia chooses who they want to kill or take out of the town. And the sheriffs try to determine who was in the mafia, and then the doctor tries to save and then there’s an open discussion. So it gets pretty heated. It’s pretty fun.” — Oregon State’s Tyler Malone, explaining “Mafia,” a game the Beavers played during a weather delay that lasted more than four hours on Monday.

Malone drove in three runs as the Beavers eliminated Washington, 14-5. He had a pinch-hit RBI single, a bases-loaded walk in the at-bat immediately following the delay and a home run.

TODAY’S TOP TWEET: Texas junior Kody Clemens went 1-for-4 with a walk and was the final out in UT’s season-ending loss to Florida on Tuesday. The Big 12 Player of the Year and an All-American by all reputable publications, Clemens ends his junior season with a .351 batting average, 72 RBIs and 58 runs. His 24 homers this year were the second-most in school history.

A third-round pick of the Detroit Tigers, this was likely Clemens’ last game at Texas.