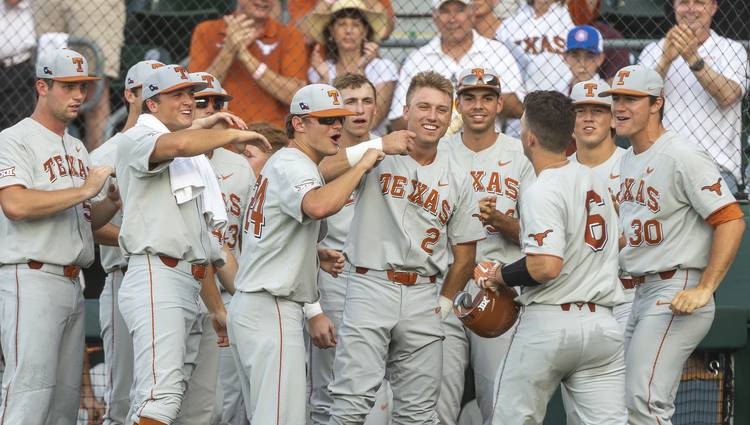 When it comes to writing down the official record, Texas’ baseball season won’t be tough to describe.

The Longhorns went 42-23 this year. They won the Big 12 championship for the first time since 2011. They reached the College World Series for a record 36th time but went 0-2 in Omaha.

But in actuality, connecting the dots between Texas’ season-opening shutout of Louisiana-Lafayette and its season-ending loss to Florida is not as simple.

“We weren’t giving anything; we had to take it,” UT pitcher Chase Shugart said after the Longhorns’ loss to the Gators on Tuesday. “We went out and competed every inning, every out, and that’s what good teams do and I wouldn’t trade this for the world.”

Picked to finish third in the Big 12’s preseason poll — in part because it lost 11 players to the 2017 MLB draft — Texas eventually ran down Oklahoma State for the conference’s regular-season championship. It secured regional and super regional titles in games played at UFCU Disch-Falk Field. The defense turned an NCAA-best 73 double plays. The Longhorns earned 18 comeback victories, and Austin Todd, David Hamilton and Kody Clemens each hit walk-off home runs.

In April, senior Jake McKenzie played all nine positions in a seven-inning game against UT-Rio Grande Valley. It was a moment in the spotlight for McKenzie, an “ultimate utility guy” who established himself as a first baseman. The oddity was the first of its kind in UT’s history, but McKenzie didn’t think that feat defined the season.

“I think it’s going to be (remembered as) the year Kody hit 24 bombs,” McKenzie said.

The youngest of Roger’s boys, Clemens became his family’s first All-American this season. He paced Texas in home runs (24), RBIs (72) and batting average (.351), just the ninth Longhorn since 1960 to lead the team in those three categories. The second baseman’s 24 homers were the second-most in school history.

Clemens opened the year by reaching base in Texas’ first 25 games. He hit six home runs in two late-season series against Texas Tech and TCU. He got a hit in each of UT’s eight NCAA postseason games, and he clubbed two homers in an NCAA regional against Texas A&M.

Clemens was the Big 12’s player of the year. He also was a finalist for the Golden Spikes Award and the Dick Hoswer Trophy.

“It’s second to none,” Texas coach David Pierce said of Clemens’ season. “And for us to be able to witness and see what he did all year and be a part of that and the energy that he brought back to the University of Texas was incredible.”

The Longhorns also paid tribute to their former coach throughout the spring. Augie Garrido, who won two national championships and became college baseball’s winningest coach while leading the Longhorns from 1997 to 2016, died on March 15 after suffering a stroke in California. Players wore helmet stickers and hat patches to memorialize him and Garrido’s initials and No. 16 were painted onto the Longhorn logo in the outfield.

Garrido’s jersey was hung in UT’s dugout. Even Pierce switched to wearing Garrido’s No. 16 at the College World Series.

The Longhorns were 9-9 on the season when Garrido passed, coming off a two-game series sweep loss at Arkansas the day before. The day after, Texas opened Big 12 play by snapping a five-game losing streak with a 14-4 win over Kansas. They went on to win seven of their next eight, 12 of their next 15 and 19 of their next 23, overtaking Oklahoma State for the title on the final weekend. The Longhorns won six of their eight Big 12 series.

Thank you for the past 4 years @TexasBaseball I’m going to miss the photo shoots that gave me quality pictures like this the most #HookEmForever pic.twitter.com/Y73gzQDReA

Don’t weep for Pierce, though. Texas will retain its catcher, the left side of the infield, three veteran outfielders plus the versatile Masen Hibbeler. Pitchers Donny Diaz and Cole Quintanilla, who hails from Cedar Park, will return from injuries that cost them their seasons. Texas also boasts a 16-member recruiting class that has thus far lost only pitcher Simeon Woods-Richardson to the draft.

“We have a good recruiting class coming in next year,” McKenzie said. “We’re only going to get better from here.”