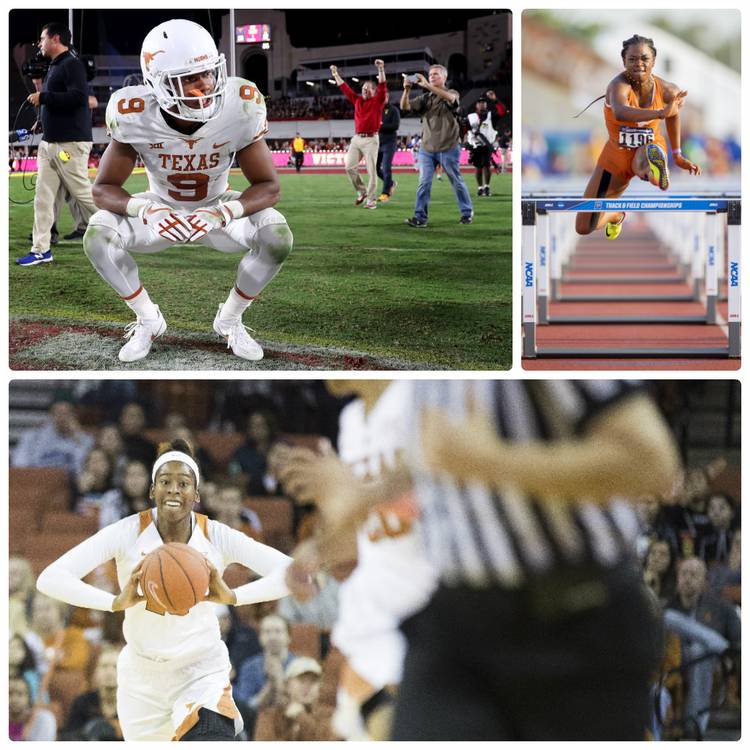 We came up with the list by looking at an athlete’s importance to his or her team as well as the athlete’s career arc. “No one player determines the success of an entire season,” we wrote. “But if all 10 play well, the Longhorns are far more likely to win championships.”

Here’s how our Texas Ten fared:

Texas coach Karen Aston needed a leader, and Atkins delivered. She led the team in scoring (14.9 points per game) and shot 42 percent from 3-point range, pairing with fellow senior Brooke McCarty to help the Longhorns reach the Sweet 16 for the fourth straight year.

Atkins earned honorable mention All-American honors and ranked No. 2 in the Big 12 in steals. The 5-11 guard from Duncanville is now playing for the Washington Mystics of the WNBA, scoring in double figures in eight of her first 12 games.

“I thank God for opening up a lot of doors for me since I’ve been here, and the stage is set for our younger players to take off,” Atkins said in April, after the Longhorns’ Sweet 16 loss to UCLA. “We came here with a mindset that we were going to get Texas back to where it needs to be.”

There were sky-high hopes for Berg, a 5-6 freshman midfielder from Celina, after a standout club career. She was the state’s No. 2 overall prospect her senior year and had made the Team USA Under-18 national roster.

Berg, who famously committed to Texas as an eighth grader, started out hot, scoring just 25 seconds into the Longhorns’ season opener against Rice. In all, she tallied six goals — the second-most on the team — along with four assists.

Texas, with only two seniors but 18 freshmen or sophomores, enjoyed a bounce-back season, going 14-4-3 and reaching the third round of the NCAAs. Berg was the Big 12’s freshman of the year.

“She’s a special talent and we’ve been excited to get Haley Berg on the Forty Acres for the past four years,” UT coach Angela Kelly in October, referring to Berg’s middle school commitment.

“I think stepping into the college environment, she’s assimilated herself extremely well,” Kelly added. “When she’s coming in with this skill set with still a lot more to bring to the table, that’s kind of exciting for her and her career.”

As a freshman in 2017, Burton became the fastest freshman in NCAA history, ripping through the 100-meter hurdles in 12.65 seconds to finish third. The sophomore from Jamaica followed that up by winning Big 12 indoor and outdoor titles this year and may get even faster under new UT track coach Edrick Floréal.

Upon his arrival, Coleman was hailed as a savior at point guard, a position of dire need for the Longhorns. The 6-2, 180-pound freshman from Virginia averaged 10.2 points and 4.1 assists per game for Texas, which went 19-15 and fell to Nevada in overtime in the first round of the NCAA Tournament.

Coleman scored a career-high 25 points in the NCAA loss. Before that, his jumper in the final minute sealed a 68-64 win over Iowa State and he held Oklahoma’s Trae Young to a 7-of-22 shooting performance.

He also hit the game winner against Tennessee State and helped Texas beat Alabama by putting the clamps on the Tide’s Collin Sexton the way he did OU’s Young. He’ll be an integral cast member next season.

“As a point guard, you have to have the face of confidence so others can feed off you,” Coleman told the Statesman in February after the Longhorns’ 79-74 upset of OU.

Ghim, who was the runner-up at the U.S. Amateur last summer, had a magical final season — six top-10 finishes in nine events, winner of the Ben Hogan Award, finishing as the low amateur at The Masters with two eagles in a five-hole span in the first round at Augusta, and the Big 12 championship medalist.

“Doug’s had a remarkable career,” UT coach John Fields said the week of The Masters. “He’s been an All-American and has become one of the best players in college golf. Doug weathered the storm at the U.S. Amateur of what was the best putting exhibition I’ve ever, ever seen in golf from Doc Redman. That pointed out the resilience of Doug.”

Ghim has gone professional. In May, he became the top-ranked golfer in the World Amateur Golf rankings. This week he played his first professional tournament at the Travelers Championship.

One of UT’s most talented receivers, Johnson led the Longhorns in receiving yards (765) and had two touchdowns. He opened the season by making only his second career start, catching seven passes for 125 yards and a touchdown at home against Maryland. That also was his first 100-yard game.

Johnson became the 24th Longhorn to catch 50 passes in a season; his 54 total were the 19th most in a single season. And he came up big in one of Texas’ most important games — tying his career high with seven catches for 191 yards (another career high) at USC, his 191 yards the fourth-best receiving game in UT history and the most for a road game.

But overall, the passing game was inconsistent and Texas finished 7-6.

Johnson will be a junior this fall.

“Clean slate,” Johnson told the Statesman in April. “You’ve got to forget everything that happened last season. … I definitely want to be that elite guy, but it’s taking it day by day. I don’t want to worry too much about the future. I’ve got to worry about how I can get better in that film study, how I can get better on the practice field, how I can be a better teammate to my teammates, how I can be a better leader to some of the younger guys … I think it’s all those little things stacked on top of each other, and that’s what I’m working on.”

Kingham, coming off a solid sophomore season in 2017 — going 10-4 on the mound, lasting at least seven innings in seven Big 12 starts and pitching a gem against UCLA in the regional — emerged as Texas’ Friday-night starter, compiling an 8-5 record with three saves as the Longhorns won the Big 12 and made it to the College World Series.

It was a roller-coster season for the junior. Kingham twice was named the Big 12’s pitcher of the week and won six straight starts from April to mid-May, but he was left off the all-conference team after failing to last more than two innings against Kansas State and Baylor and getting scratched from a start against Oklahoma for violating a team academic attendance rule.

But the next day he was solid in a four-inning relief appearance against the Sooners, then threw a complete game against TCU in the final weekend as the Longhorns chased Oklahoma State for the conference title. He was solid against Oklahoma in the Big 12 tournament and pitched Texas past Texas A&M in the regional.

He was a 12th-round pick of the Atlanta Braves in this month’s MLB draft. He announced Thursday that he will not return for his senior season.

Texas went 111-12 in Ogbogu’s four seasons, including three Final Fours and a 2015 national runner-up finish. She is playing professionally in Italy.

Schooling, from Singapore, is looking ahead to the 2020 Olympics. He just won the 200-meter butterfly at the Singapore national championships on Thursday.

Schubert, like Ghim, was sensational. She became the program’s first first-team All-American since 1997. She had seven top-10 finishes and finished tied for 21st at the NCAAs, a career best.

In the summer of 2017 she became the first Longhorn since Kelli Kuehne in 1996 to win the U.S. Women’s Amateur, beating Albane Valenzuela — the world’s No. 3-ranked amateur player and a former Olympian — in the final.

Schubert played eight tournaments in her final season, breaking her own school record for single-season stroke average (71.76) and producing five top-five and seven top-10 finishes in her eight events. She was the first Longhorn since 2011 to win the Betsy Rawls Invitational and finished a career-best 21st at the NCAA championship.

When we identified our 10 UT athletes to watch back in August, we also listed 15 others who didn’t make our list but definitely were worth watching. Here’s how their seasons went:

Texas athletics, 2017-18: A year of wins on the field, but also transformative change off it