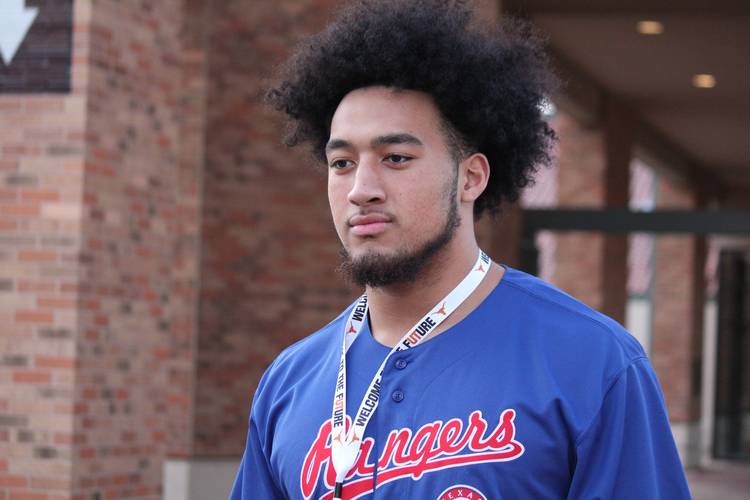 Out-of-state targets converge at The Opening

Texas isn’t afraid to recruit outside of its talent-rich borders to fill spots in recruiting classes. The Longhorns signed eight out-of-state prospects in 2018 and four of Tom Herman’s 10 pledges for 2019 play their prep football in other states. Expect that number to grow toward double-digits before national signing day.

The only UT commit attending is California outside linebacker De’Gabriel Floyd. Georgia defensive back Kenyatta Watson II was invited but can’t attend after a shoulder scope in May. The Longhorns enter The Opening Finals with 10 commitments.

A few of those out-of-state targets who could help finish the class will be in Frisco for The Opening, which begins Saturday:

Cain was born in Louisiana and was raised in Texas. He started his prep career at Denton Guyer, earning District 5-6A offensive newcomer of the year honors as a freshman and was second-team all-state as a sophomore before moving to IMG Academy in Florida. He has been a long-time target for Texas at running back because of his Texas ties. His roots in Louisiana also put LSU firmly in the mix. Cain is a powerful, compact running back who can earn tough yards between the tackles. His balance makes him an elite prospect.

Davis took an official visit to Texas for the Heat Wave pool party. Georgia is still considered the favorite despite the Longhorns making a strong impression during the visit. Davis is a uniquely athletic outside linebacker and a top-100 national prospect. He’s a big, strong linebacker with sideline-to-sideline speed. He can excel as an outside linebacker asked to set the edge, rush the passer and occasionally play against the pass. He also possesses the frame to transition to middle linebacker in college. Davis played at Clear Lake in Houston before a move to Florida.

McCoy is listed as an athlete by most recruiting services. He wants to play wide receiver and that’s the position he’ll compete at during The Opening Final. Texas is one of the top schools for McCoy, who is close to UT commit and fellow Californian, De’Gabriel Floyd. McCoy also has potential at outside linebacker and could outgrow the wide receiver position. He plays on both sides of the ball for his high school team and took an unofficial visit to Texas on April 28.

Cain isn’t the only IMG Academy running back targeted by Texas. The Longhorns signed linebacker Ayodele Adeoye in 2018, which gave the staff a chance to watch and build relationships with the top players at IMG during the 2017 season. Sanders is a dark-horse Texas target who quietly considers the Longhorns one of his top schools. He’s the top-rated running back in the country and he can put a stamp on that title with a strong performance at The Opening Final, though the event isn’t built to highlight the running back position.

Texas holds one commitment along the offensive line with five-star offensive tackle Tyler Johnson. The Longhorns also feel good about their chances with Javonne Shepherd, who will also be at The Opening. Texas is battling Texas A&M for Shepherd. A different rival is shaping up as the favorite for Wilkins. Oklahoma is in the driver’s seat, but he visited Texas for junior day and received an offer from the Longhorns on the trip. He has remained in contact with UT offensive line coach Herb Hand.