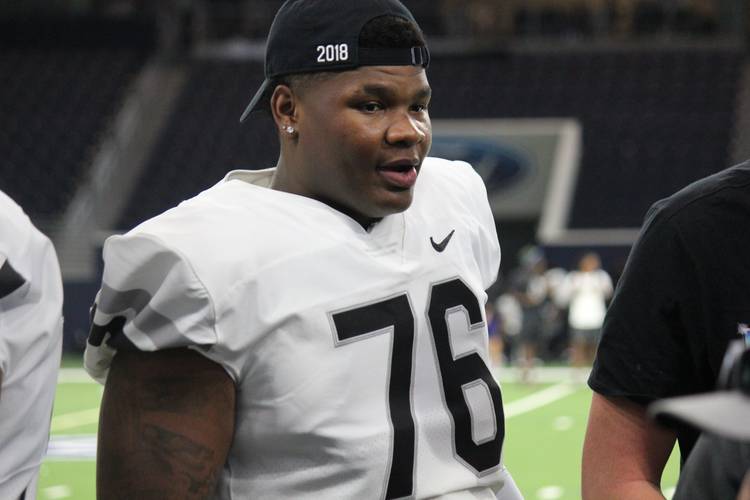 Five-star Tyler Johnson from Conroe Oak Ridge remains the lone offensive lineman committed to the Longhorns in the 2019 class. Two of the top targets remaining on the board – Javonne Shepherd and Stacey Wilkins – are in Frisco for The Opening Final. Both prospects measured in at 6-foot-7. Shepherd ran a 4.82 in the 40-yard dash at 327 pounds. Wilkins ran a 5.1. The two make for an athletic duo on a field full of the best big men in the country.

“This is a great camp with the best players in the country. I’m proving I belong,” Shepherd said. “I think I’m one of the best athletes at my position.”

Shepherd plays at North Forest, a Class 4A program in Houston. He’s not used to facing defensive ends who can match his size and strength. The four-star considers Texas and Texas A&M his top two schools, but plans on taking all five official visits before committing. The Longhorns are currently the leader, according to Shepherd.

“Texas treats me like family and keep it real,” he said. “The Opening is about fun and business. We stop talking about recruiting and just get back to playing football and building bonds.”

Wilkins is an Arkansas-native who named Texas among his top schools alongside Georgia, Miami, Arkansas and Oklahoma. He also plans on taking all five official visits and says he’ll commit in January at an all-star game of his choosing. He’s currently slated to play at The Polynesian Bowl to close out his senior season.

“It’s hard. The visits are tough money wise and it’s all getting thrown at you one time. It’s tough for young guys. That’s why family and a strong support system is important,” Wilkins said. “Want to feel the family atmosphere and the love from the coaches.”

Wilkins is among a group of high-profile commits and targets planning to take visits to Texas for the USC game. He and offensive line coach Herb Hand are also building a strong relationship. Wilkins was offered during a visit to Austin for junior day.

“Me and coach Hand have a good relationship. He doesn’t make it too much about football. He’s one of the top coaches at his position in the country,” Wilkins said. “I’ve seen what Texas is about. I want to have fun and feel what the atmosphere is like in a big-game setting.”