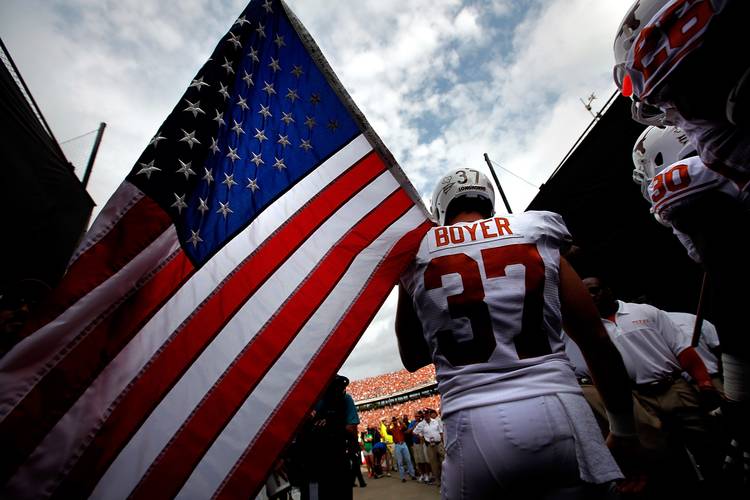 Fire up that Fourth of July grill and let’s talk a little college football. The Astros, the World Cup? Fun diversions. Yet we all know what really moves that meter #deepintheheartof.

In our rite of summer, the American-Statesman counts down its 10th annual Preseason Top 25 beginning this week. We’ll reveal the poll in a day-by-day package, going in reverse order for maximum drama. No. 25 kicks off Thursday and No. 1 wraps up July 29.

We don’t want to give away too much about our choices, but we’ll pique your interest with some odds and ends.

The most fascinating thing about our poll is that 14 staff voters were all over the map on the Big 12. Simply, there is no consensus this year, especially with Oklahoma starting over at quarterback after the departure of Heisman Trophy winner and No. 1 overall NFL draft choice Baker Mayfield of Lake Travis.

Kyler Murray, Mayfield’s heir apparent, didn’t have a great spring, and now the Oakland Athletics have tossed him nearly 5 million reasons to be distracted.

One Statesman voter ranked the Sooners fourth. Another had them 18th.

Three voters liked TCU enough to put the Horned Frogs in the top 10. Two voters completely ignored the Frogs, who must rebuild their offensive line and break in a new quarterback.

West Virginia? Similar story. Yes, Will Grier looks like the best quarterback in the league by a long shot. At 20-1 odds, he also has the Big 12’s best Heisman shot. But the Mountaineers will have to win a lot of shootouts.

Our panel was perplexed by Texas. Eight voters had the Longhorns in the Top 25, six said no. We’ll see how that translated.

Oklahoma State is coming off three straight 10-3 seasons, but here’s a newsflash: The Cowboys, who lost most of their big guns, are one of our “first four out,” along with Florida, Florida Atlantic and South Carolina.

The Statesman is buying on the Big Ten with five teams among the top 15. Wisconsin is one of them, fronted by running back Jonathan Taylor, the preseason Heisman favorite (7½-1) at oddshark.com.

The SEC also has five teams total in our poll. Is Texas A&M, under new management, one of them?

Our preseason poll has nailed the national champion the last two years, Clemson in 2016 and Alabama last year. We’re not exactly giving away a state secret by disclosing that those two are once again in the mix.

The Crimson Tide showcase more five-star talent than anyone, and the Tigers have not one, but two QBs — Trevor Lawrence and Kelly Bryant — among oddsmakers’ top-12 Heisman favorites.

So bring it on.